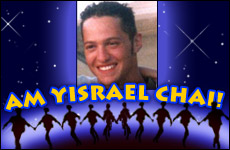 The indomitable spirit of Israel will be very much alive next week at a very poignant wedding.

Tamar Ben-Zvi, 24, is as excited as any bride could be a week before her wedding. Blonde and blue-eyed, she is often mistaken for a foreigner. She couldn't be more of a sabra, growing up working in the kibbutz cowshed on Mount Gilboa.

And then the milkmaid fell in love with a soldier -- robust and darkly handsome and, best of all, with a nurturing soul. His army comrades told her how he would cover their exposed feet whenever he came back last at night. She even liked his name, Shai Haim, literally "gift of life."

From listening to Tamar speak about her husband-to-be, you'd never suspect the great difficulty with which Shai will break the glass under the canopy. Shot by a terrorist, he no longer walks.

Likewise, it's hard to imagine the bittersweet emotions of the officiating rabbi. Even as he rejoices for Shai and Tamar, the rabbi cannot possibly forget that his own son was killed in the same attack that paralyzed Shai. That rabbi is Jerusalem Post columnist Stewart Weiss from Ra'anana.

Tamar's friendship with Shai began when she phoned another soldier in his unit. Shai picked up a ringing cellphone for his absent army bunkmate with the intention of taking a message. Instead, he and Tamar talked for two hours. Their May romance blossomed.

By happy coincidence, Tamar already knew Shai's best friend, Ari Weiss, whose cousins lived on Ma'aleh Gilboa. Although Tamar and Shai were just getting to know each other, Ari foresaw their marriage and promised to make merry at their wedding. It was one of the few promises the sincere and kind-hearted staff sergeant wouldn't keep.

On September 30, Ari Yehoshua Weiss was on guard duty in Nablus. Shai hadn't been scheduled to guard, but he decided to join Ari. Shots rang out. Shai went down. Ari ran toward him and took the second, fatal bullet himself. The medics found them lying side by side.

Shai's parents phoned Tamar with the grim news. Ari was dead. Shai had survived, but he was seriously injured. He was already in surgery when Tamar arrived at the hospital.

"Abdominal injury" didn't sound too bad at first. But as the hours passed, Tamar's fears escalated.

But as the hours passed, Tamar's fears escalated. She remained alone with Shai in the intensive care unit. She wept all night for Ari and prayed for Shai. She realized then that she would do anything to get Shai back, no matter the condition in which he came back to her.

At dawn Shai finally opened his eyes. He motioned that he wanted to write.

"My friend is dead," he scrawled. He made Tamar promise to attend the funeral for both of them.

At the funeral Ari's mother, Susie, sought Tamar out among the thousands of friends. Susie hugged Tamar and wanted to know how Shai was.

"I wondered how she could be so large of spirit to care about someone else at a time like that," Tamar said. "What a remarkable family."

In the last year-and-a-half, Shai and Tamar have become part of that family. They speak to the Weisses daily. They couldn't imagine any other rabbi marrying them.

"He's a son to me," says Stewart Weiss of Shai. Nonetheless, as their son's friends from his unit gather next week, Ari's absence has to be excruciating. Had he lived, Ari would have been a witness at the wedding.

As for Shai's paralysis, acquaintances are quick enough to remind Tamar of "what she's getting into." Tamar answers that she knows many walking persons who are emotionally paralyzed and aren't nearly as "open, loving, and beautiful" as her Shai.

"There are tests in life," says Tamar. "We've passed this one."

Their own families have never uttered a word of discouragement.

In eulogizing Ari, his father asked those at the funeral to return home and sing "Am Yisrael Chai" -- "the people of Israel lives." Anyone who knew the family well understood why.

Rabbi Weiss saw as a role model Chaim Shapiro, a Holocaust survivor whose only surviving son died with honor fighting in the War of Independence. Shapiro buried his son to that song of Jewish survival. The Weisses, in turn, have become role models for us all, may we never be tested.

The indomitable spirit of Israel will be very much alive next week as Rabbi Weiss pronounces the blessings under the bridal canopy. The soul of Israel will live in the embrace of a bereaved mother who finds it in her heart to dance with a young bride.

The determination of our people manifests itself in the courage and dignity of a young couple going on with their lives despite the terrible price defending our country has cost them. We are humbled and inspired by their ability to find the roses among the thorns.

May their lives always be filled with the sounds of joy and gladness. May they be blessed with the peace of their own holy canopy.

Still Crazy: Why We Made Aliyah
The Power Of Prayer
Va’etchanan 5782: A for Effort
Can You Show Me This "God?"
Comments
MOST POPULAR IN Israel
Our privacy policy
Aish.com Is Looking for Great Writers