The Rescue of Bulgarian Jewry 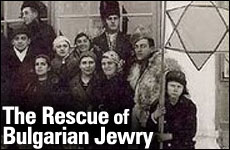 How all 50,000 Bulgarian Jews were saved during the Holocaust.

Many know the story of how Denmark rescued 8,000 Jews from the Nazis by smuggling them to Sweden in fishing boats.

Few, however, know the story of how all 50,000 Bulgarian Jews were saved. For decades, all records were sealed by the Bulgarian Communists in an attempt to prevent glorification of the King, the Church, and the non-Communist parliamentarians who at great personal risk stood up to the Germans.

Until the Communist downfall in 1991, the story remained untold, the last great secret of the Holocaust era.

Bulgaria is a small country which, at the outset of World War II, had 7 million people. The Jewish community, having lived in Bulgaria since the 2nd century CE, numbered approximately 50,000.

During the war, Bulgaria aligned with Nazi Germany in hopes of recapturing Macedonia from Yugoslavia and Thrace from Greece, which had been stripped from Bulgaria following their defeat in World War I.

In 1940, Bulgaria instituted social and legal restrictions of its Jewish citizens, in the style of the infamous Nuremberg Laws. Bulgaria also deported non-Bulgarian Jews in those territories it had annexed from Yugoslavia and Greece. Then at the beginning of 1943, the Nazis informed the Bulgarian government that all Bulgarian Jews would be deported to Nazi-occupied Poland.

The news of this inhumanity was a hot topic of conversation, and public opposition began to grow. This was due to the sense of close-knit community in the small Bulgarian population, and particularly the fact that Bulgaria consisted of minorities – Armenians, Turks, Greeks and Gypsies, as well as Jews.

As the date for the deportation drew closer, Parliamentary leader Dimitar Peshev led a coalition of 43 legislators who registered an official protest. Newspapers denounced the deportation. The Patriarch of the Bulgarian Orthodox Church, Archbishop Stefan, actively worked against the deportation and issued fake baptism certificates in an attempt to save Jews. Bishop Cyril, who headed the church in Plovdiv, threatened to lie down on the railroad tracks and promised the Jews, "Wherever you go, I'll go with you.”

Since Bulgaria was a German ally, the cost of open resistance could have been total annihilation at the hand of Nazi troops. Yet the Germans were stretched militarily, and had to wrestle with the problem of how much pressure they could afford to apply in the face of this subversion. In the end, the Nazis decided to avoid a confrontation.

Thus Bulgaria became the only nation in Europe to save its entire Jewish population from the Nazi death camps, and King Boris has the distinction of being the only world leader to defy Hitler face-to-face during the war. (King Boris died under mysterious circumstances in 1943.)

Of the 50,000 Bulgarian Jews, some 40,000 went to Israel after the War. Among those was Michael Bar Zohar, who later served in the Israeli Knesset and wrote the remarkable book, Beyond Hitler's Grasp, detailing the rescue of Bulgarian Jewry.

The book was translated into Bulgarian, and the ADL shipped 30,000 copies to Bulgaria, to ensure that the population could learn about this heroic facet of their history.

Related Video: And You Shall Tell Your Children

Pharaoh and the Final Solution