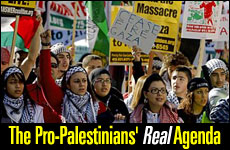 Hatred for the Jewish state is being promoted on American campuses.

During a recent visit to several university campuses in the U.S., I discovered that there is more sympathy for Hamas there than there is in Ramallah.

Listening to some students and professors on these campuses, for a moment I thought I was sitting opposite a Hamas spokesman or a would-be-suicide bomber.

I was told, for instance, that Israel has no right to exist, that Israel's "apartheid system" is worse than the one that existed in South Africa and that Operation Cast Lead was launched only because Hamas was beginning to show signs that it was interested in making peace and not because of the rockets that the Islamic movement was launching at Israeli communities.

I was also told that top Fatah operative Marwan Barghouti, who is serving five life terms in prison for masterminding terror attacks against Israeli civilians, was thrown behind bars simply because he was trying to promote peace between Israelis and Palestinians.

Furthermore, I was told that all the talk about financial corruption in the Palestinian Authority was "Zionist propaganda" and that Yasser Arafat had done wonderful things for his people, including the establishment of schools, hospitals and universities.

The good news is that these remarks were made only by a minority of people on the campuses who describe themselves as "pro-Palestinian," although the overwhelming majority of them are not Palestinians or even Arabs or Muslims.

These groups of hard-line activists/thugs are trying to intimidate anyone who dares to say something that they don't like to hear.

The bad news is that these groups of hard-line activists/thugs are trying to intimidate anyone who dares to say something that they don't like to hear.

When the self-designated "pro-Palestinian" lobbyists are unable to challenge the facts presented by a speaker, they resort to verbal abuse.

On one campus, for example, I was condemned as an "idiot" because I said that a majority of Palestinians voted for Hamas in the January 2006 election because they were fed up with financial corruption in the Palestinian Authority.

And then there was the campus (in Chicago) where I was "greeted" with swastikas that were painted over posters promoting my talk. The perpetrators, of course, never showed up at my event because they would not be able to challenge someone who has been working in the field for nearly 30 years.

What struck me more than anything else was the fact that many of the people I met on the campuses supported Hamas and believed that it had the right to "resist the occupation" even if that meant blowing up children and women on a bus in downtown Jerusalem.

I never imagined that I would need police protection while speaking at a university in the U.S. I have been on many Palestinian campuses in the West Bank and Gaza Strip and I cannot recall one case where I felt intimidated or where someone shouted abuse at me.

Ironically, many of the Arabs and Muslims I met on the campuses were much more understanding and even welcomed my "even-handed analysis" of the Israeli-Arab conflict. After all, the views I voiced were not much different than those made by the leaderships both in Israel and the Palestinian Authority. These views include support for the two-state solution and the idea of coexistence between Jews and Arabs in this part of the world.

The so-called pro-Palestinian "junta" on the campuses has nothing to offer other than hatred and de-legitimization of Israel. If these folks really cared about the Palestinians, they would be campaigning for good government and for the promotion of values of democracy and freedom in the West Bank and Gaza Strip.

Their hatred for Israel and what it stands for has blinded them to a point where they no longer care about the real interests of the Palestinians, namely the need to end the anarchy and lawlessness, and to dismantle all the armed gangs that are responsible for the death of hundreds of innocent Palestinians over the past few years.

The majority of these activists openly admit that they have never visited Israel or the Palestinian territories. They don't know -- and don't want to know -- that Jews and Arabs here are still doing business together and studying together and meeting with each other on a daily basis because they are destined to live together in this part of the world. They don't want to hear that despite all the problems life continues and that ordinary Arab and Jewish parents who wake up in the morning just want to send their children to school and go to work before returning home safely and happily.

Many of the Palestinian Authority and Hamas officials I talk to in the context of my work as a journalist sound much more pragmatic than most of the anti-Israel, "pro-Palestinian" folks on the campuses.

Over the past 15 years, much has been written and said about the fact that Palestinian school textbooks don't promote peace and coexistence and that the Palestinian media often publishes anti-Israel material.

While this may be true, there is no ignoring the fact that the anti-Israel campaign on U.S. campuses is not less dangerous. What is happening on these campuses is not in the frame of freedom of speech. Instead, it is the freedom to disseminate hatred and violence. As such, we should not be surprised if the next generation of jihadists comes not from the Gaza Strip or the mountains and mosques of Pakistan and Afghanistan, but from university campuses across the U.S.

Khaled Abu Toameh, an Arab Muslim, is a veteran award-winning journalist who has been covering Palestinian affairs for nearly three decades. He studied at Hebrew University and began his career as a reporter by working for a PLO-affiliated newspaper in Jerusalem. Abu Toameh currently works for the international media, serving as the 'eyes and ears' of foreign journalists in the West Bank and Gaza Strip. Abu Toameh's articles have appeared in numerous newspapers around the world, including The Wall Street Journal, US News & World Report and The Sunday Times of London. Since 2002 he has been writing on Palestinian affairs for The Jerusalem Post. Abu Toameh has also been working as a producer and consultant for NBC News since 1989. He is a Distinguished Senior Fellow at the Gatestone Institute.

Under the Barracks: The Rabbi and the Holocaust Survivor

Intermarriage and the N.Y. Times
In the Shadow of David and Goliath
Where Do the Laws of Nature Come From?
Saadiah Gaon, Rashi and Maimonides: How Three Rabbis Revolutionized Judaism
Comments