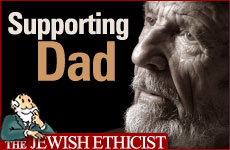 My father has a very low income, but owns a very large house. And he's disinheriting me. Am I obligated to support him?

Q. My father has a very low income, so I send him money each month even though it is a hardship for me. But he lives in a very valuable house – is he really poor? Also, he has announced his decision to leave his entire estate to his wife (not my mother), so in a way I feel like I am supporting a stranger.

A. It is certainly regrettable that your father intends to disinherit his children. The mishna states: "One who leaves his assets to someone and forsakes his children – what he did has legal force, but the Sages don't approve of him." (1)

The expression "forsake his children" allows for the possibility that the parent may want to leave some assets to friends, charity etc., but the expectation is that the bulk of the estate should be left to the children. The expressions "the Sages don't approve" is a common one in the Talmud; it expresses a high degree of disapproval. The continuation of the passage makes it clear that even if some of the children don't meet the parent's expectations – it says that the estate shouldn't even be passed "from a bad child to a good child".

But just as parents shouldn't ignore their obligations to their children because they may disapprove of their actions, so children can't ignore their obligations to their parents because of such disapproval. In Jewish law, children don't have a per se obligation to support their parents, but if the parent is poor and eligible for charity, the child is expected to be first in line in helping out, and the parent should be the first and primary charity recipient.

The Shulchan Arukh (comprehensive Code of Jewish law) rules in this context:

The obligation of the child to feed the parent [as a fulfillment of honoring the parent] is at the parent's expense. But if the parent is lacking, the child is compelled to provide for the parent. (2)

So your father's lack of thoughtfulness regarding his will is not a good enough justification to stop providing for his needs.

The fact that he owns a house is a more complex situation. On the one hand, a house is a very valuable asset; a homeowner is typically worth many hundreds of thousands of dollars and it seems strange to define that as "poor". In fact, if your father was truly impoverished his will would not be of interest. On the other hand, Jewish law does not require a person to be homeless in order to be considered poor, and in general a person is not obligated to sell his house in order to be eligible for charity. The mishna gives the criteria for charity eligibility as follows:

One who has two hundred zuz is [considered poor and therefore] allowed to take leket, shikhcha and peah and the poor tithe [various kinds of agricultural leavings for the poor].  . . We do not require him to sell his house or personal effects. (3)

On the other hand, it may be possible for your father to support himself from the value of the house without becoming homeless. For example, many people in your father's situation take out a "reverse mortgage", a kind of annuity in which the homeowner gets a fixed payment each month for life in return for surrendering the home to the insurer at death. If he is able to make such an arrangement he would be considered someone who is capable of supporting himself, not one who needs to accept charity even from his son.

It is worth examining the option of a second mortgage for your father, to see if it could provide him with needed income. If he finds that this arrangement suits his needs, you will have solved the problem of the ongoing strain on your income. But take into account that it will not solve the problem of the estate, because under this arrangement there will be no estate since the house will have been signed over to the lender.

The Jewish Ethicist: Watch Your Mouth

The Jewish Ethicist: Sold Salesman
Blessing on Chewing Gum
Was Rahab a Prostitute?
Extras In Our Own Epic
Comments
MOST POPULAR IN Current Issues
Our privacy policy