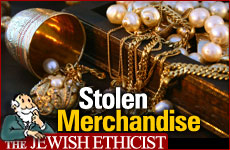 Q. I suspect a store in my neighborhood sells stolen merchandise, especially since the prices are so low. Is it permissible to buy from them?

A. Fencing stolen goods is a serious crime in Jewish law. The book of Proverbs (29:24) states:

Whoever shares with the thief hates his own soul; [even if] he is subject to an oath, he will not reveal.

The particular issue raised by Scripture is that the fence will fail to disclose the theft, even under oath, and thus will subject himself to a curse. This would apply particularly to someone who actually knows about the theft, and not to a customer who really has no direct knowledge of the crime. But Maimonides, basing himself on a Talmudic passage, gives a reason that greatly expands the scope of the prohibition:

It is forbidden to buy a stolen object from a thief, and it a serious sin, for he thereby abets the wrongdoer and causes him to steal in the future. For if he can't find anyone to buy, he won't steal. And of this it is said, "Whoever shares with the thief hates his own soul".(1)

Maimonides views this with great severity. Not only is the customer guilty of not bringing the thief to justice for what he did in the past, as is implied by the verse in Proverbs; he is responsible for encouraging, even causing, him to steal in the future. In another place, Maimonides connects this with the specific Biblical prohibition of putting an "obstacle before the blind":

It is forbidden to buy a stolen object from the thief, and forbidden to help him alter it in order that it should be bought. For anyone who does these or similar things abets wrongdoers and violates (Leviticus 19:14) "And do not place an obstacle before the blind".(2)

The Talmud explains this idea with an analogy. In a particular case where the customer in an illegal sale is fined, the Talmud asks: Why should we fine the buyer? Why don't we fine the seller? The reply: "It is not the mouse which steals, it is the hole that steals." The reply is that the hole is harmless without the mouse, so letting the thief off the hook is not a valid response, but the basic insight that the hole (the customer) is what enables the mouse (the thief) remains valid. (3)

The prohibition is not limited to cases where there is certainly that the object is stolen; it extends to any case where the circumstances are suspicious. For example, the mishna states that one shouldn't buy wool, milk or ewes from a shepherd, meaning someone who works as a shepherd for others.(4) While it is possible that he bought these goods on his own, the fact that his main job is shepherding other people's flocks and that he has come into possession of wool, milk or ewes is quite suspicious, justifying the limitation on buying from him.

If you want to buy from this store, it would be a good idea to ask the seller where the merchandise comes from and make sure you are convinced his explanation is convincing before you buy.

Faith and the Stock Market

The Jewish Ethicist: Favorable Judgment
G-d Time
Shavuot is The Holiday of Cheesecake and Blintzes
What Does Kosher Mean Literally?
Comments
MOST POPULAR IN Current Issues
Our privacy policy