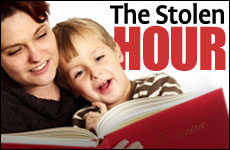 They were stealing the only hour in the entire week that was mine.

They were stealing the only hour in the entire week that was mine.

That's the way I felt that Friday night a short while ago, when mini-disasters kept cropping up faster than we could deal with them.

Working from home has definite advantages. It also means you are always at work. When I gave up my office job and started working from the house, my occasional evening in bed with a good book, or curled up on the couch catching up with a friend, suddenly vanished. There was always something I should be doing. Only Shabbos remained my oasis of tranquility, untouched by the computer or phone.

On Friday night, once the table was cleared and the kids put to bed, I'd change into a robe, get a stack of reading material, a hot tea, and some chocolates, and pass an hour in pure bliss. No matter how tired I was, I'd force myself to stay up, explaining to my baffled husband that one can only enjoy relaxing when awake; the state of sleep is one of no awareness. It was a luxurious hour that was all mine.

One Friday night, just before I could settle into the corner of the couch, I heard an ominous coughing and then a plaintive "Mommy." I raced to the bedroom, but both I and my three-year-old were too late. She had thrown up all over herself and my husband's bed.

She had seemed lethargic during the meal and complained of a bellyache. When she asked to sleep in our room, my husband settled her in his bed, in the linen I had changed just a few hours earlier. Now, that little bit of TLC was costing more than expected. My husband changed her and washed her up, while I stripped the linen and cleaned the floor. We gave her a drink and a bucket by her bed. A hug and goodnight kiss, and peace was restored.

I made some comment about the beauty of the quiet. My observation was premature.

We went back to the living room, my husband to the weekly Torah portion and me to my book. We both read for a bit. My husband prepared two steaming mugs of tea. I made some comment about the beauty of the quiet.

My observation was premature. A sudden hysterical scream from the boys' room alerted us to the fact that my baby's ear infection was still not gone, despite his beginning antibiotics. Nights were when the pain would plague him. I looked longingly at the tea, and got up to feed him. My husband gave him some painkiller.

He was just settling down, and I was hoping to reach the tea before it cooled off entirely, when the coughing, gagging noise returned. I unceremoniously dumped the baby in his crib and raced to the girls' room. My daughter was not in bed. She had made it to the bathroom, but not quite far enough. Both she and the bathroom were in a bad state. The baby was screaming his protest of my sudden abandonment.

My husband came down the hall and sized up the situation in a moment. Our eyes locked. Despite the inappropriateness of the reaction, we simultaneously burst into laughter. "Better laugh than cry" has always been our motto. Then we got to work.

This time he cleaned the floor while I dealt with her. She said her stomach still hurt. I held her hair out of her face, pressed a cool hand against her forehead and stood with her by the toilet. I held her tight while she emptied her stomach, then rinsed off her face and began to gently change her pajamas. She looked up, still in a haze of sleep, and the trust I saw in her eyes almost scared me. It was a look of vulnerability laced with certainty. She was having a rough night, but she counted on me. Counted on me to care for her, tend to her, love her.

As a teenager, I had prided myself on my analytic, almost masculine mind. I was a cool, detached observer of life, never hysterical, almost always in control. I didn't get gushy and effusive, emotional and demonstrative. It seemed like a fine state as a single woman, but as a mother I had my doubts about my credentials.

I remember holding my firstborn several hours after birth. I stared at the tiny bundle of human being. Clear eyes in a wizened face looked back at me. I was worried. I wasn't feeling an overwhelming rush of maternal love. While enchanted and enthralled by this new life, I wondered how much I truly felt for him. Would I be willing to give my life for him? I squirmed when the answer was not an instantaneous yes.

At some point, I stopped contemplating and started feeding, burping, changing and rocking this little person. And the love began to bubble up. Would I place my body over his if we were ever caught in a terrorist attack? I hoped never to learn the answer to a question so horrific, but I was quickly learning that our emotions are sometimes far ahead of our brains.

Whatever I may think of my mothering, in her eyes, I was the Rock of Gibraltar, a shelter in the storm.

And here I was, with a sick, smelly little girl, telling her it would be all right, washing her down, cuddling her on my lap as I held a cup to her lips. My analytical brain looked on and sneered, "You?! It's other mothers who are soft-spoken and soothing, who give of themselves fully and unconditionally. They are a comforting balm for their children. But you?"

And yet, my heart felt just right. Fighting the sense of being a fake, and despite the frustration over my stolen hour, I truly felt concerned, loving and tender. And one more look at my little girl told me all I needed to know. Whatever I may think of my mothering, in her eyes, I was the Rock of Gibraltar, a shelter in the storm. She counted on me completely and unreservedly. We sat together for a while, while she recovered from her ordeal. Then I tucked her in and gave her a last kiss.

I made my way back to the couch. The tea was stone cold, I was no longer in the mood for chocolate and I was so tired my eyes refused to focus on the words I attempted to read.

My beloved hour had been stolen.

But I had received so much more in return.

Reprinted from the Front Page, issue 7.

How to Talk to Your Kids About Scary Things

3 Steps to Help Your Child Talk about Difficult Things

Slovie Speaks: How to Instill a Love for Judaism in Your Children

Short and Sharp: Raising Kids without Raising Your Voice

Letting Go
Were Adam and Eve Jewish?
How I Learned to Love the Multiverse
10 Big Jewish Inventions
Comments