The Gift of Rest 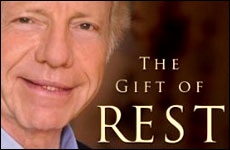 A review of Sen. Joe Lieberman's book on rediscovering the beauty of the Sabbath.

If you've ever felt the yen to celebrate a Jewish holy day in a festive, traditional style, this marvelous book will enable you to approximate the experience - without calories from rich, filling food or risks of leaving wine stains on the white tablecloth.

Your host, Connecticut Sen. Joe Lieberman, comes across as a chatty, good-natured, Old World uncle who's free with advice, anecdote and sentimental reminiscence. Like most conversations around a religious family's Sabbath table, the discussion rambles and wanders, with amusing, earthy or insightful asides of sometimes dubious relevance, but it keeps circling back to the book's main argument: that all Americans, of every outlook or religious perspective, would benefit from a weekly embrace of the idea of a Sabbath.

The purpose of "the gift of rest" in Mr. Lieberman's view isn't "to recharge our batteries so we can work harder but to recharge our souls so we can live better." Citing a wide variety of Jewish sources both ancient and modern, the senator affirms that work and rest form an indissoluble whole. Six days a week we work to improve our world; on the seventh day, we rest to improve ourselves.

The heart of the book describes the mechanics of that process of improvement and enrichment. Mr. Lieberman offers a lovingly detailed guided tour of territory that most of his fellow citizens might consider foreign and remote: the province he and his wife, Hadassah, have identified as "Shabbatland." (Shabbat is the Hebrew word for the Sabbath.) Like other exotic destinations, Shabbatland features its own distinctive culture, rules, foods, history, music, pleasures, standards of dress, communal gatherings and even language.

For secularists, and especially for the great bulk of American Jews who have received scant exposure to the rigors and joys of Orthodox Jewish practice, this informative exploration of the 25 hours of the Sabbath (it begins at sunset but concludes only at full dark) will prove fascinating and rewarding, answering the perpetual questions about how, exactly, observant Jews spend their time while they retreat each week from the insistent demands of the workaday world.

Mr. Lieberman possesses unique qualifications to offer this tour as surely the best-known Sabbath observer in the United States. As Democratic vice-presidential nominee in the epic campaign of 2000, he faced countless questions on whether strict limitations one day each week and on major Jewish holidays (no traveling in cars or airplanes; no using phones, blackberries or microphones; no monitoring media; no handling money) would impact his ability to handle the lofty office he sought.

In fact, an entire chapter in the book describes those occasions when Jewish law (according to Mr. Lieberman's understanding) allows violations of normal Sabbath procedure. He describes a particular Sabbath afternoon in 2010 when he spoke on the telephone to his friend Sen. Lindsey Graham of South Carolina, in a vain attempt to rescue a bipartisan climate-change bill. Mr. Lieberman explains a rabbinic tradition suggesting flexibility for Sabbath-observant Jews on behalf of "a greater good, such as preserving or protecting life and health or supporting the well-being of the community."

Of course, such reasoning could allow important leaders to abandon the Sabbath most of the time, but Mr. Lieberman makes clear his general practice of serving the public without violating religious traditions, emphasizing the all-important difference between the merely urgent and the truly important. In the midst of the recount crisis in December 2000, Al Gore hosted the Liebermans for an impromptu Sabbath meal with campaign staff at the vice-presidential residence.

After Mr. Lieberman recited blessings and led songs, Tipper Gore suggested to her then-husband, "Al, let's turn off our electronics. If anyone really needs us, they'll know how to get us." Later that night, the Gores walked the Liebermans back to their home in Georgetown - with a Secret Service detail trailing the two couples at a respectful distance.

In addition to such sidelights on recent history, "The Gift of Rest" cites long-ago examples of American presidents who, as devout Christians, observed Sunday restrictions in the White House. Franklin Pierce conducted no business on the Lord's Day and wouldn't even allow mail to be opened; Theodore Roosevelt, enthusiastic outdoorsman that he was, refused to hunt or fish on Sunday for religious reasons.

In the interest of full disclosure, David Klinghoffer (generously acknowledged by Mr. Lieberman, by the way) is a friend, neighbor and fellow congregant in our Orthodox Seattle synagogue, and Mr. Lieberman has been a friendly acquaintance since my days at Yale Law School 40 years ago.

But even those who have never met the senator will feel that they know him - and like him - from the pages of this book. In 2012, he will leave the Senate after 24 tumultuous years, and while few will recall his specific legislative achievements (or failures, like that ill-starred climate-change bill he cherished) all Americans should honor his true legacy: the dignity with which he has exemplified the principle that true religious faith, like the Sabbath itself, has more to do with warmth, joy and fellowship than restriction, guilt and intolerance.

Michael Medved is the author of 12 books and hosts a nationally syndicated radio talk show.

Jimmy Carter: Man from Plains
Is Grease the Word?
Dried Fruit Compote
Scientific Curiosity and the Divine Encounter
Comments
MOST POPULAR IN Current Issues
Our privacy policy
Aish.com Is Looking for Great Writers