"The Da Vinci Code" and the Jews 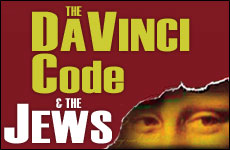 The controversial book highlights the fundamental differences between Judaism and Roman Catholicism.

It's commonly called "the runaway best seller of the 21st century." The numbers are staggering. Forty million copies sold round the world. Translated into 44 languages. Soon to be released as a movie starring Tom Hanks. Critics agree: There hasn't been anything like Dan Brown's The Da Vinci Code in publishing history.

And that, truth be told, hasn't made the Catholic Church very happy.

This, after all, isn't just an exciting mystery novel. Woven into a story of the aftermath of a murder in the Louvre Museum is a tale of Christian conspiracies, high level cover-ups, and ancient secret societies that the author repeatedly hints is more fact than fiction. Written in breezy roman-a-clef style, the reader is introduced to Catholic orders that really exist, prominent holy sites that can readily be visited, and famous people of past and present -- all of whom share in what is presented as the greatest theological falsification of history.

"Almost everything our fathers taught us about Christ is false," laments one of Brown's characters. "Faith," he has one of his heroes tell us, "is based on fabrication."

Mingling fact with fiction in a combustible mixture that leaves readers perplexed by the boundaries between one and the other, Brown leads us to believe -- with more than an author's wink -- that an incredible hoax has been played on millions of pious Christians who've never been told the truth about the Holy Grail.

For centuries, pious Christians have been taught that the Holy Grail is the cup from which Jesus drank at the Last Supper. But for Brown's all-knowing art critic and alter-ego Robert Langdon, that isn't true.

"The Grail," Langdon tells us in a scholarly voice that appears to echo the author's personal conviction, "is symbolic of the lost goddess. When Christianity came along, the old pagan religions did not die easily. Legends of chivalric quests for the Holy Grail were in fact stories of forbidden quests to find the lost sacred feminine. Knights who claimed to be 'searching for the chalice' were speaking in code as a way to protect themselves from a Church that had subjugated women, banished the Goddess, burned non-believers, and forbidden the pagan reverence for the sacred feminine." (The Da Vinci Code, pages 238-239)

And there is more. A woman's body is symbolically a container, and the most famous of these has a name every Christian will immediately recognize. Brown claims that the Holy Grail was actually Mary Magdalene. She was married to Jesus and was the vessel that bore his children.

Small wonder the Church is profoundly disturbed. Brown's book is for the Vatican blasphemy masquerading as history.

The secret that could not be revealed since the birth of Christianity is that Jesus' bloodline continues to flourish to this day. The Grand Masters of the Priory of Sion (an actual Christian organization), among whom Brown lists Leonardo Da Vinci, Isaac Newton and Victor Hugo, have -- according to the book's premise -- kept to their oath never to reveal any of this to the public and the Roman Catholic church is committed to suppressing this information. Brown strongly hints that only the fortunate readers of this "documentary disguised as fiction" may at last share in this incredible revelation.

Small wonder the Church is profoundly disturbed. Brown's book is for the Vatican blasphemy masquerading as history. If the Da Vinci Code premise is true -- and the entire book is replete with suggestions that the reader is permitted entree to secret truths merely couched in a fictionalized framework -- Rome needs to revise its faith and its past, its beliefs as well as the story of its beginnings.

But what strikes me, as a rabbi, is the remarkable irony that the very theories about Jesus presented by Brown that make the book blasphemous to Christians are concepts that make Jesus far more comprehensible to Jews.

So Jesus was married! Well why shouldn't he have been? Reared as a Jew, celibacy would have almost certainly been an idea totally foreign to him. "Be fruitful and multiply" was the biblical creed that all Jews considered sacred. Celibacy as a Christian ideal wouldn't become law until the Council of Elvira (300-306) decreed (Canon 33): It is decided that marriage be altogether prohibited to bishops, priests, and deacons, or to all clerics placed in the ministry, and that they keep away from their wives and not beget children; whoever does this, shall be deprived of the honor of the clerical office.

Christian scholars explain the reason: The Church wanted to insure that the wealth of its leadership would not be dissipated by way of family inheritance. A non-married clergy would always return their possessions to Rome.

Historians have pointed out the chilling effects of this doctrine. The "best and the brightest" were invariably encouraged to enter the prestigious life of the priesthood. That effectively condemned their genes to hereditary oblivion. Jews, on the other hand, turned those with the greatest intellectual potential to rabbinic lives of learning and teaching combined with an emphasis on large families. That, claims Will Durant in his classic The Lessons of History, is what in all probability accounts for the statistically unbelievable preponderance of Jewish Nobel Prize winners and achievements.

More troubling for Christians, a married Jesus is far too much a human figure instead of a god to be worshipped. Christianity can't conceive of their object of divine reverance as a sexual being -- or even as one conceived by the sexual act. It is a troublesome relationship with physical pleasure that turned Christian teachings away from their Jewish biblical source. But Jews have no problem with a married Moses. It is the Torah that Moses brought to us that not only commands marriage but calls it Kiddushin -- an ideal state of holiness.

Here is the crux of a crucial concept that has separated Judaism from Christianity throughout the centuries. Jews spared no effort to insure that their greatest leader never be confused with God; Moses was always to be viewed as human, mortal, less than divine, even capable of sin for which he was punished and denied entry into the Promised Land. His very burial site was to remain hidden so that it not become revered beyond measure. The greatness of Moses rests precisely on his human qualities. He represents mankind's potential. In him we see what we fellow human beings are capable of becoming.

The book is making 40 million people question what Jews have long recognized about Christianity's founder: Jesus was not God; he was human.

Christians, on the other hand, insisted that Jesus be viewed not as man but as god; his human form could never be allowed to overshadow his divinity. Jesus was not elevated man but a god descended to earth. Physical frailties and human weaknesses couldn't possibly be part of his makeup.

And that is what Brown has breached in revealing, albeit in an ostensibly fictionalized account, a "human" truth about Christianity's founder. A married Jesus with children is, for the Church, nothing less than a diminished god.

That's why Jews shouldn't be upset about the success of The Da Vinci Code. After all, it's responsible for making more than 40 million people question what Jews have long recognized about Christianity's founder: Jesus was not God; he was human.

And perhaps the day will come when the world will acknowledge what Judaism teaches: It isn't God who became man, but man who must strive to become more like God.

Spider-Man on the Roof

Adele's New Song Gives Us Access to Her Heart
For Every Individual, A Torah Scroll
Allegiance To The Monarch
Meet the Real You: Yom Kippur
Comments
MOST POPULAR IN Current Issues
Our privacy policy
Aish.com Is Looking for Great Writers