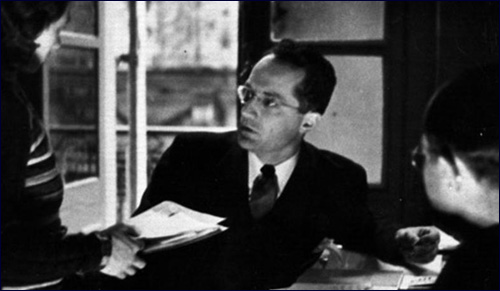 Even though he lacked the necessary experience, Varian Fry risked his life to save Jews in Vichy France because no one else was going to do it.

“In a place where there are no leaders, strive to be a leader” (Ethics of the Fathers 1:5). In 1940, one mild mannered American became the very embodiment of that ideal.

The journalist Varian Fry first witnessed the evils of Nazism in 1935 when he visited Berlin at the age of 28. Fry, who was not Jewish, was shocked at the anti-Semitism he witnessed there and quickly reported his observations to The Associated Press, providing some of the earliest first-person accounts of Nazi violence towards Jews. 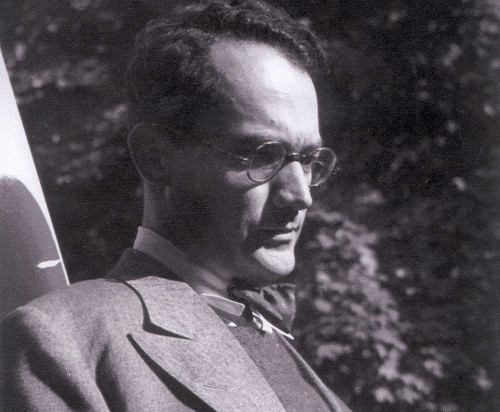 One night in July 1935, Fry observed rioting across Berlin targeting the city’s Jews who were beaten up and spat on by gangs of attackers. Gangs of young and old, upper and lower classes all took part in the pogroms chanting, “The best Jew is a dead Jew,” in what Fry described as “a holiday mood”.

Fry noted that the German police were nowhere to be seen and did not seem “to make any effort whatever to save victims from this brutality”. The police’s only actions seemed to be clearing space in front of popular cafes; at times “they attempted to clear areas for motor traffic”. But “that was all” Fry informed readers; the police made no effort to shield Jews.

The German police were nowhere to be seen and didn’t seem “to make any effort whatever to save victims from this brutality”.

That disturbing experience galvanized Fry to try and help. In 1940, along with other literary figures in Manhattan, he helped found the Emergency Rescue Committee which provided American support for refugees in Vichy France. At the time, refugees from German-occupied Europe had poured into southern France but they were hardly safe there. France’s pro-German Vichy Regime collaborated with Nazi authorities to turn over refugees and political opponents to German authorities. The Emergency Rescue Committee tried to help refugees find passage out of France to safe areas within Europe or beyond. 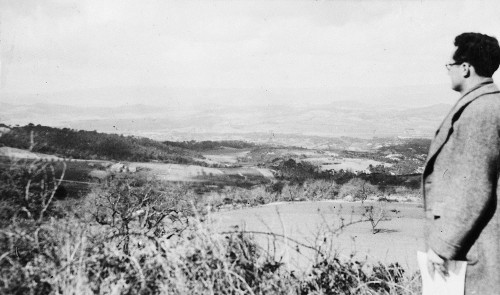 For Varian Fry, this wasn’t enough. He wrote to Eleanor Roosevelt, a patron of the Committee, urging her to use her influence to find someone to travel to Vichy France. Fry explained to the First Lady that this person would have to be “an adventurous daredevil” willing to risk his life in order to “save the intended victims of Hitler’s chopping block.”

Fry stressed that he was not suggesting himself for this risky role. He was entirely unsuitable: his French and German were “halting” and he had “no experience whatever in detective work.” Surely, he felt, Mrs. Roosevelt or the President himself could find the dashing, multi-lingual, heroic figure necessary to help the desperate refugees sheltering in southern France.

When no such hero turned up, the editor with no experience in international espionage saw no alternative but to volunteer himself for the job.

When no such hero turned up, Varian Fry, a 33-year-old, glasses-wearing editor with limited language skills and no experience in international espionage, saw no alternative but to volunteer himself for the job.

He strapped $3,000 to his leg and set off for France for a few weeks to help arrange passage for refugees out of the country. Fry came with a list of 200 refugees eligible for visas; by the time he arrived in France news of his arrival had spread and hundreds of refugees arrived at his hotel begging him for help. He wound up staying in Vichy France for over a year and eventually aided thousands of émigrés. 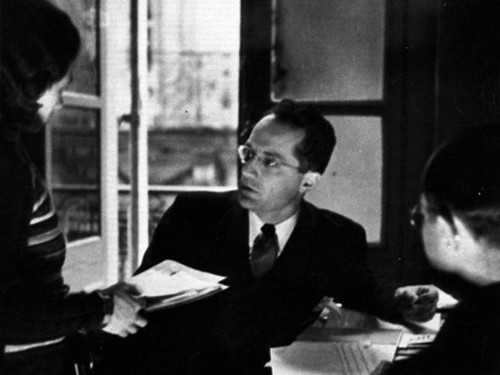 Varian Fry at his office in Marseilles in the spring of 1941.

The line of refugees outside his hotel each day was so long Fry rented an office and put together a list of associates who could help him process visa applications, prioritizing those who faced immediate danger first. Fry later recalled the difficulty of deciding whom to help first: “We had no way of knowing who was really in danger and who wasn’t. We had to guess, and the only safe way to guess was to give each refugee the full benefit of the doubt. Otherwise we might refuse to help someone who was really in danger and learn later that he had been dragged away to Dachau or Buchenwald because we had turned him away.”

In France, Fry was under constant surveillance and was questioned on more than one occasion by Vichy authorities. His life was in danger but a sense of urgency to help others drove him to act. Fry established a legal charity in France called The American Relief Center, using it as a cover and commissioning forged and black market travel documents to help refugees leave. Fry would hold meetings in bathrooms and whisper with the water running in order to evade the listening devices that authorities used in vain to trap him. He employed a former Viennese cartoonist to forge documents and smuggled refugees out of France on warships to North Africa. He devised secret mountain routes to smuggle refugees into France’s neighbors.

Fry had almost no help in his work. He appealed to the American Secretary of State Cordell Hull twice, writing to the politician: “Thousands find themselves in prisons and concentration camps of Europe without hope of release because they have no government to rescue them... Cannot the U.S. and other nations of the Western Hemisphere take immediate steps” to aide them?

One official who did assist him was the U.S. Vice Consul in Marseilles, Hiram Bingham IV, who helped supply the refugees Fry assisted with travel documents. When the few hundred emergency visas he was authorized to issue ran out, Bingham and Fry issued refugees with fraudulent documents. Vice Consul Bingham’s work was eventually discovered and his career in the Foreign Service suffered as a result; he retired early in his forties. Fry’s work earned him the ire of both the U.S. State Department and Vichy French officials and he was expelled from France after being in the country for 13 months. The U.S. Embassy did nothing to intervene.

Fry enabled approximately 2000 refugees to leave, many of them famous artists and thinkers of the 20th century.

As he prepared to leave for Spain, Fry later recalled, “It was grey and rainy as I boarded the train. I looked out of the windows and innumerable images crowded my mind. I thought of the faces of the...refugees I had sent out of France, and the faces of a thousand more I had had to leave behind.” 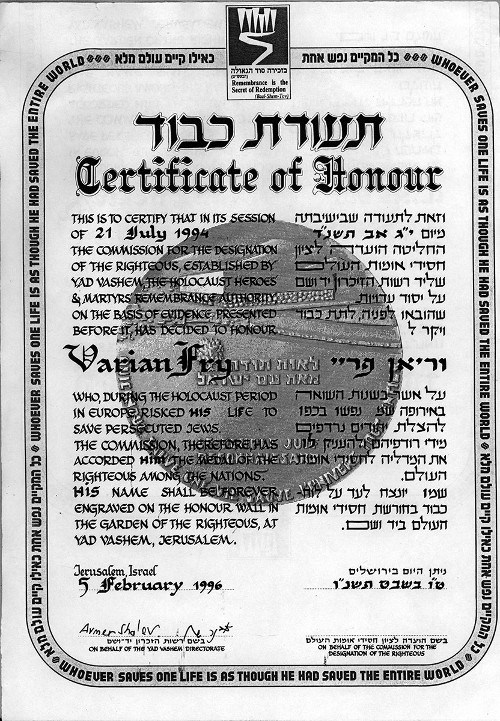 The certificate of honor awarded by Yad Vashem to Varian Fry

In the 13 months he remained in France, Fry enabled approximately 2000 refugees to leave. Many of those he helped escape read like a roster of some of the most famous artists and thinkers of the 20th century. Fry helped save the life of the Jewish painter Marc Chagall, the Jewish German writer Lion Feuchtwanger, the anti-Nazi German writer Heinrich Mann and the anti-Nazi French writer Andre Breton. German painter Max Ernst and the Austrian writer Franz Werfel fled France with his aid. Fry helped the German Jewish philosopher Hannah Arendt whose later writings about the Holocaust introduced the term “banality of evil” to describe the businesslike way Nazis and their allies hounded Jews. He provided travel documents to Alma Mahler, the wife of the Gustav Mahler; she fled across the Pyrenees carrying her later husband’s final piece, his haunting Tenth Symphony, saving it from destruction in France. 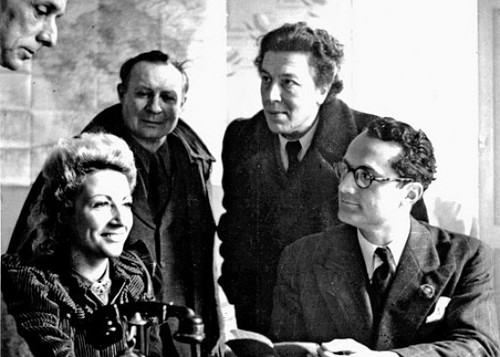 After the War, Varian Fry told very few people about his wartime heroism. When he got married in 1950, his wedding announcement in The New York Times didn’t mention his activities on behalf of Emergency Rescue Committee nor the American Relief Center. He became a high school Latin teacher in Connecticut and died in 1967. 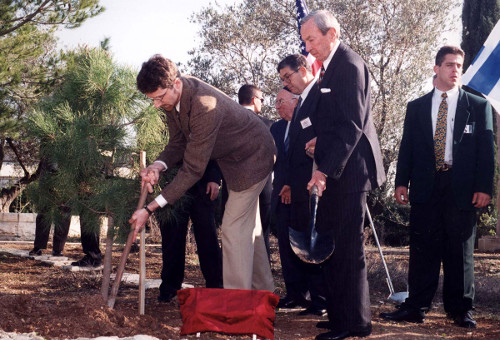 The only official recognition that Fry received for his heroism during his life came shortly before his death when the French government awarded him the Croix de Chevalier de la Legion d’Honneur. In 1991, the United States Holocaust Memorial Council posthumously awarded Fry the Eisenhower Liberation Medal. In 1994, Israel’s Yad Vashem Holocaust Remembrance Center honored him as “Righteous Among the Nations”. That ceremony was attended by then-US Secretary of State Warren Christopher who apologized for the State Department’s lack of help in Fry’s heroic mission half a century earlier.

On September 9, 2017, Varian Fry was memorialized in a sold-out symposium in the Brooklyn cemetery where he was interred. Belatedly, this quiet hero achieved some measure of fame and gratitude for the thousands of lives he risked his own to save.

The American Couple who Risked Everything to Help Holocaust Refugees
Faith: the Axis Upon Which the Wheel of Science Turns
Love - Not Just About Chemicals Anymore!
Is There a Moral Code in a Virtual World?
Comments
MOST POPULAR IN Current Issues
Our privacy policy