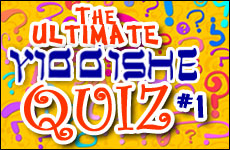 Think you are a yiddishe "maven." Take the Ultimate Yiddishe Quiz!

Who among us doesn't love quizzes? Jews especially adore testing our knowledge, knowing our IQs, EQs, (never mind our Ps & Qs), then informing everyone that we (our mate, our kinder) are in the 99th percentile of ... everything (including the ability to put on 20 pounds at one Seder). Personally I'm a "fact" addict. I was not only a contestant (I have the mix master to prove it!), but later, wrote game shows, and two quiz books. So ... let's turn our attention to the "quizzical" world of Yiddish culture. Nu, give it a try already!

1. You're in an internet café reading the latest issue of Jewlarious. The person sitting next to you strikes up a conversation about websites,thereby "bagelling" you. Which did he likely do?

ANSWER: (b) First there was smoke, then Morse Code, and of course, traffic lights. Their job in life is to "signal": "STOP," "GO," "DITCH AHEAD" ... whatever. We Jews are tribal. Not that it matters, but some of us are more comfortable knowing we're talking to a Jew. For years we've fished like Ahab to find out, but now it's got a name: "bageling." (Although personally, I would've chosen "gefilting.")

2. "If grandma had wheels, she'd be a wagon," answers your best friend. Which might you have said to evoke this popular Yiddish saying?

ANSWER: (b) A favorite saying in my family, when said with just the right tone of dismissive contempt and a side of "big deal," the "victim" is yanked back to reality. If only's, could be's, maybe's? Forget it! IF ... it isn't, can't be, won't be, who cares? What is - is. Deal mamala.

3. You've invited a famous person to your Yom Kippur break fast. You told the celeb to bring along "mischpokhe." Who of the following was able to "farshtaist" (understand) best, and came with mischpokhe?"

ANSWER: (a) "Mischpokhe" is family - but more. Like many Jews, in my family we considered anyone who came from the same town in Russia, or married a third cousin twice removed, "mischpokhe." A lot of us consider all Jews "mischpokhe." While pets are "family," the word only applies to humans. Now, that's some "mischpokhe" mazel!

a) Colin Powell
b) Condoleezza Rice

ANSWER: (a) The year? 1993. The place? Jerusalem. How does a Black U.S. V.I.P. stun an Israeli Prime Minister who's seen it all? Colin Powell did, when, as Chairman of the Joint Chiefs of Staff, he greeted Yitzhak Shamir in perfect Yiddish! As Shamir pulled himself together, the men chatted in Yiddish. Powell, born in 1937, grew up in the South Bronx which, during the 1950s was "Jewfull!" He worked for Sickser's baby equipment store from age 13 until his sophomore year at City College. Even as Secretary of State, never forgot Sicksers and Mamaloshen, the colorful second language he acquired. His family must be kvelling!

5. "Oy, look at that cellulite!" exclaims Chava, who notices with horror, that her WHICH is jiggling like Jell-O?

ANSWER:From (a) "Pulkes" are plump thighs - on a chicken, yes, but also a person. "Pupik" is your belly-button. The Yiddish-Yinglish speaker can create with such a funny word. All my life I heard, "He's such a nudge, he worries whether a moth has a pupik," or "One pie you call dessert for twenty? In your pupik!" So, even if you're not a Yiddish maven, if you didn't know the difference, forgive me, but your brains are in your pupik.

6. Patricia, your non-Jewish neighbor tells you her daughter is pregnant with twins. You spit maybe twice (Poo! Poo!). Patricia correctly takes your 2-spit gesture to mean:

a) Twins are twice the tsouris!
b) May there be no evil eye!

ANSWER: (b) The ever-handy spit is one way superstitious Jews ward off the evil eye. No, I don't know why. Could be, as in the Wizard of Oz, water is a weapon, capable of melting all manner of monsters. My theory is "smell-melt." Spitting on a person after you've had a meal of herring "mit" onions ... not to mention our penchant for garlic, might not actually melt them, but could send them running. (Hey it works for vampires.)

7. Your 85-year-old zayde from Russia, plays poker once a week. A new man, Morris, joins the group and starts kvetching. Your zayde and Morris start arguing to the point of "cursing." Which is your zayde, who is a gentleman, more likely to say?

a) May you eat chopped egg with onion, pickled herring, gefilte fish, pastrami, latkes – and may you have an abscess in your tooth, so you scream in pain with every bite!
b) May you have ten gorgeous houses, each house with ten magnificent bedrooms, each bedroom filled with a special bed, and each night you should choose a different bed to sleep in - and may you scream from a massive heart attack and no one can find you!

ANSWER: (a) OK, true. Neither is exactly a blessing! And in both, there is the traditional "May you" prophecy that lulls the listener with good wishes, then quickly ruins the "good." The one subtle difference is the heart attack. A true gentleman might wish abscesses, choking, itching, insomnia, toothlessness, a perpetual running nose, onions growing from navels, small convulsions – even slight burns or holes from backing into a stove or pitchfork ... but a heart attack, cancer, tuberculosis, leukemia, are serious ... and a tad too realistic, even for the furious!

8. The Sheinbaums, world travelers, wanted an exotic Bar Mitzvah for their only son. All had to be Glatt Kosher. Which could they NOT serve at the reception?

ANSWER: (b) Forget tigers and go for quail or even some locusts! To be kosher, land animals must have cloven hooves and chew their cud, while birds must not be birds of prey or scavengers - although kosher, personally, I'd skip the either appetizer … and wait for the main course – moose!

9. HARD. So many Yiddish words or those with Yiddish origins have entered our lexicon. Who doesn't know the meaning of klutz? Or nosh? Or yutz? Ah, but a word is making the rounds in TV, film, and books lately that sounds like Yiddish, looks like Yiddish, is mistaken for Yiddish but ... uh uh ... it's NOT Yiddish. Which is it? (No Googling allowed.)

ANSWER: (b) This word has been showing up in print lately - and stirring things up - which is, in fact, its meaning. According to Webster's New Millennium&trade; Dictionary of English "kafuffle" is defined as disorder, commotion; also written curfuffle, kerfuffle, gefuffle. It's origin? Gaelic! OK, here's where it gets interesting. "Kochleffel" means the same thing - one who stirs up trouble; gadabout, busy-body (Lit., a cooking ladle) - and IS Yiddish. But so far, "kochleffel" isn't making it into the Daily News. Go figure!

10. WARNING! CONTROVERSY AHEAD! The egg cream. This mmm-mmm so good confection, made popular in New York City, was "the" Yiddishe drink! This simple delight that consists of seltzer, milk, and Fox's chocolate syrup (no egg!) has become legendary and was served up at every Jewish-style candy or drug store. Ah, but the proper making of an egg cream (never mind its true origins) has caused much debate. So, I asked Stan Zimmerman, owner of the famed Sammy's Roumanian Steak House, on the Lower East Side of Manhattan, to settle it once and for all. OK, true. The debate will still continue, but this question is based upon his expertise. Which is at least one part of his recommended method?

a) Put chocolate Fox's U-Bet syrup in first!
b) Put the milk in first!

ANSWER: If for some reason, this is the first time you've heard of the magnificent egg cream, allow me to introduce you. INGREDIENTS: Seltzer (bottle only), Fox's U-Bet, whole milk. Add the milk first (an inch). Spritz seltzer almost to top and let sit three seconds, then add a little more seltzer. Pour syrup down center of glass to taste (about three to four ounces). Stir right, then left. After it homogenizes, it will separate, forming a clear base and white head ... oh, and drink! Oh ... and you can make it yourself IF, you follow these directions. Exactly. (Well OK, mostly exactly. But ... NEVER USE CLUB SODA OR ANYTHING BUT FOX'S!) You'll thank me for it later!
Like What You Read?  Give Jews around the world the chance to experience engaging Jewish wisdom with more articles and videos on Aish. It would make your mother so proud and as a nonprofit organization it's your support that keeps us going. Thanks a ton!

Yoga for Dummies
What Makes Eli Run?
The Tyranny of Materialism
Science Enters the Mysterious Inner World of Consciousness
Comments
MOST POPULAR IN Jewlarious
Our privacy policy