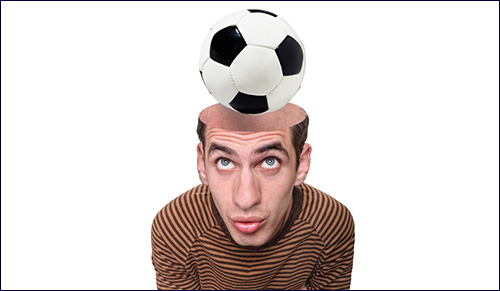 My struggle to understand my nephews’ obsession with football provided me with a spiritual touchdown of sorts.

If you ask any male in Wisconsin (my hometown), they will tell you that our state's greatest pride is the Green Bay Packers, our football team. Regardless of one’s religious affiliation or spiritual outlook, there is no such thing as not being a Packer's fan. In fact, I recall how my brothers, who are now very prestigious Rabbis in their own communities, would call home from Yeshiva during football season to get updates on the scores during every game.

I recall how my brothers who are now prestigious Rabbis would call home from Yeshiva to get updates on the Green Bay Packers.

I, however, like many other members of my gender, am somewhat limited when it comes to sports. I can tell you the basic guidelines of volleyball and hopscotch, but other than that, I am fairly useless. I was pretty comfortable with my ignorance until this past Succot when a bunch of my teenage nephews came to Milwaukee to spend the holidays with us. I observed them watching a football game; huddled around a thirteen inch computer screen and I don't think I have seen that much contained enthusiasm in all my life. There was a lot of high fiving, jumping up and down, and yelling. I started to feel a little left out. My free time during that week had been spent shopping and somehow coming home and saying "Hey guys, look what I got on sale at Nordstrom!" didn't elicit the same kind of passionate response as their football game. I began to wonder if perhaps I was missing out on something.

A month later, I was staying by my sister's house and decided to take advantage of the fact that her two sons are major sports enthusiasts (one of them is actually a budding sports writer) in the hope that they might teach me something useful. So one night, there was a big game and I decided to get in on the action. I sat myself down in front of the screen, next to the sports mafia, (a.k.a my nephews), and announced my intention to be part of the game viewing process. They looked at me like I had offered to infect them with hepatitis. "Ma, can you make her go away?" the younger one pleaded with my sister. But I stood firm. I'm not an idiot, I can be educated.

As the game progressed, I made sure to ask all kinds of useful questions. "Why are all those guys jumping on each other? Did anyone score a home run?? What’s up with the uniforms, do they really need that much shoulder padding?? Could their pants be any tighter??” With each progressing inquiry, I was awarded with murderous looks, alternating with irritated groans.

"Why is only one guy throwing the ball? Doesn't anyone else want a turn?” I kept trying to understand the dynamics. Instead of appreciating my interest in their hobby, the sports fans grew more hostile with every passing second. They were not pleased when I kept mixing up the names of the different titles of the players’ positions. (A few of them involve something with the word "back" in it, like quarterback or linebacker- but if you God forbid, confuse the two.... ) At one point, one of the boys insisted that there was something wrong with me and made some nasty comment about women being oblivious. Really? This coming from a kid who was at that very moment wearing two different colored socks??

Not one to quit, I kept on watching. "Doesn't that hurt?" I asked when about thirty men, weighing about four hundred pounds each pounced onto one poor guy simply because he was trying to run someplace with the ball. It obviously did hurt, because they called a time-out and a doctor came onto the field to inspect the guy who looked like he had been plowed over by a tank. "Why would anyone voluntarily play a game where they are going to get smashed into the ground a million times?" This earned me another withering glare from the attitude clan. "Maybe because they get paid a few million dollars per season?" one of them retorted. Seriously? Does that really sound like a good deal? A few million dollars for a few thousand concussions? How many dollars does that work out per concussion? I started doing the math out loud. The boys were not amused.

At one point, I had to go out to take a phone call – lest, heaven forfend, I talk over the game. But of course, two minutes into my conversation I hear screaming and ran back into the room to the sight of everyone high fiving each other. There was a touchdown (this is a good thing, in case you don't know) and I missed it. Of course the one time the guy running with the ball wasn't tackled to death and actually got somewhere, I didn't get to see it. Well, actually I saw one towards the beginning of the game and I got really excited, but it was the other team that scored and my fellow game-watchers did not share my enthusiasm. In fact, judging by their expressions, had domestic violence not been a legal issue, one of them probably would have strangled me at that point.

In football, the game progresses across the playing field and every team aims to get closer to their goal line. Every loss takes them further away from the team's end zone and every win brings them closer to where they want to be. The only deeper meaning I could sense during my rather odd experience is one that reminded me of a concept that Rabbi Dessler discusses in his book, “Strive for Truth”. He likens our struggle with free choice to a battlefield, where our every combat between good and evil changes the boundaries of our challenges and influences the nature of our next struggle. Every victory, each loss either brings a person closer to their "goal" or drags them further away from it.

So I have only one final message regarding my unsupportive nephews, who mercilessly teased and mocked me. They will now live in shame, humbled by my deep, spiritual discovery. And unless they take back every single unkind word they said about me not being brilliant at football stuff, I will free up my schedule for the Super Bowl. I will then show up for the game with a brand new list of questions and give them a running commentary they will never forget.

Similarities Between COVID-19 and Jewish Mothers-in-Law
In the Shadow of David and Goliath
Where Do the Laws of Nature Come From?
Saadiah Gaon, Rashi and Maimonides: How Three Rabbis Revolutionized Judaism
Comments