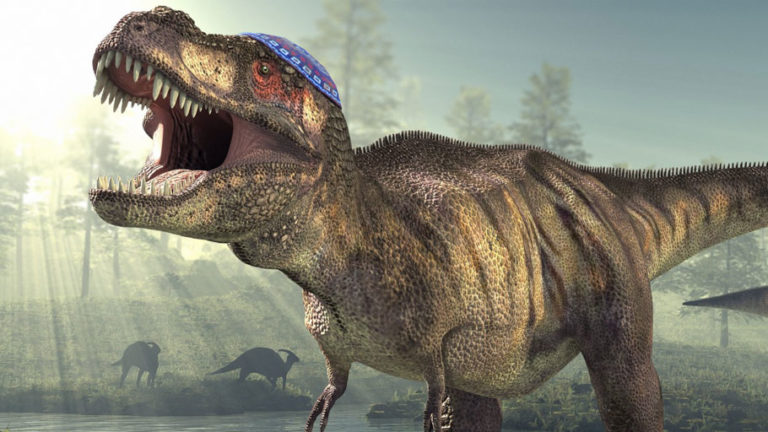 If you Google “Jewish history”, you’ll get approximately 345,000,000 results covering virtually every conceivable aspect of the topic – except one. Perhaps you’ve already guessed. That’s right – Jewish dinosaurs. Stunned that there was virtually nothing on the topic, I decided to be proactive. The result, after three years of scholarship, research and intense writing, is my upcoming fully-illustrated book, The Complete History of Jewish Dinosaurs. Here, for those impatient to wait for publication, is a brief excerpt.

What I found was at once strange and wonderful, making perfect sense once the facts were illuminated, and it was simply this: that many of the features, qualities, beliefs and principles the founders of Judaism used to create the religion were based on their own study and admiration of the characteristics of what have come to be known as Jewish dinosaurs. Here is a representative sampling of the creatures who prided themselves on never eating Jurassic pork.

The Schleposaurus, due to its imposing size (130 feet long and weighing 6.4 tons) specialized in hauling huge boulders, trees, and entire human families from one location to another, for a fee. Yes, it was the Uber of dinosaurs. Fees ranged from food to animal pelts to I.O.U.s for work. And yet all this vital work had its downside – the Schleposaurus, after decades of transporting heavy weight, developed numerous muscular and skeletal afflictions which could only be treated by making an appointment to see the following Jewish dinosaur.

The Chiroraptor was the doctor of the dinosaur community. Other dinosaurs with musculoskeletal injuries would frequently seek out the Chiroraptor, who would walk on the injured dinosaur’s back until it was realigned. Dinosaur parents encouraged their children to become Chiroraptors, as the profession was held in high regard, despite the fact that legitimate dinosaur doctors never considered the Chiroraptors to be actual doctors.

Think it’s hard to get kids to behave, keep their rooms clean, eat properly, and not tease their siblings? Imagine that times one hundred and you’ll have some idea of the challenges faced by dinosaur parents in dealing with their progeny. Hence, the development over eons of the Gigantonagus, the world’s largest nagging reptile. These resourceful and yet highly annoying creatures were faced on a daily basis with getting their young ones to not eat one another, destroy their caves, trample smaller creatures, share the smaller creatures they trampled, and treat their parents with respect rather than answering them back, in dinosaur language, with the equivalent of, “You’re not the boss of me!”

As distinguished from its close relative, the Triceratops, the Comedatops was the joker or comedian of the dinosaur world. It would have fit right in to the Jewish comics of the Catskills much later. Nothing gave it more pleasure than playing practical jokes on its dinosaur friends. For example, it would dig a huge hole in the ground, cover it with several layers of ferns, and ask a friend if he or she could identify a strange insect it had placed in the middle of the ferns. The friend would, of course, fall for it, literally, and fall through the hole, whereupon the Comedatops would laugh and laugh, and then kill and devour its friend. Now that’s comedy! The Comedatops would even do a primitive form of stand-up. One of its jokes: “What does a Triceratops sit on? It’s Tricerabottom.”

Ever found yourself aware that you needed to do something, but just couldn’t summon the desire, motivation, or energy to do so? Perhaps all you needed was a little prod, poke, dig, jab, push, or nudge. Enter the legendary Nudgeasaurus, which innately sensed your need and would provide that motivational poke. Know you need to hunt food for your family, but would prefer staycationing in the cave watching the fire? Perhaps a timely jab from the Nudgeasaurus’s 27-foot spikey tail might bring you swiftly to your feet and on your way. Also known as the most annoying dinosaur, the Nudgeasaurus understandably received the fewest party invitations. (Which, of course, didn’t stop them from attending anyway.)

The queen of the dinosaur grandmas, the Bubbiesaurus Rex excelled at dinosaur childcare. If she wasn’t cooking, cleaning, or lecturing her own children about how to properly raise their children, she was sitting around the cave fire, enlightening her family about her life “back in the day”. Bubbie, as her loved one called her, never stopped worrying about her family’s health, safety, and happiness. She never asked for anything for herself, claiming she was only truly fulfilled when she was able to do all she could for her family. But lest you think she was some soft-hearted pushover, she was fully capable of biting the heads off any dinosaur intruder foolhardy enough to attempt to attack her loved ones. She even wrote a song about it: “To All the Heads I’ve Chomped Before”.

The legendary Pterodactowitz was not a dinosaur per se, but rather a flying Judaic reptile. Early species had long fully toothed jaws and long tails. Many sported furry coats and were known as the largest flying creatures of all time. In terms of its Jewish nature, Pterodactowitz fossils reveal creatures that davened, created and ran businesses, acknowledged the value of the female, and had a self-deprecating sense of humor. There was even, briefly in 1963, a Broadway musical centered around the creature. Titled Pterodactowitz on the Roof, it lasted for just nine memorable performances before closing, yet its influence can be noted in subsequent, more successful Broadway musicals; especially Fiddler on the Roof.

Necessity is the (Jewish) Mother of Invention

You Think Your Job Is Bad?

The Two Me's
The Promise Of The Land
Which Chat Are You On?: Parshas Behar/Lag Ba’Omer
Do You Like Slow-Cooked Food? Thank the Jews
Comments
MOST POPULAR IN Funny Stuff
Our privacy policy