The Rabbi of Buchenwald 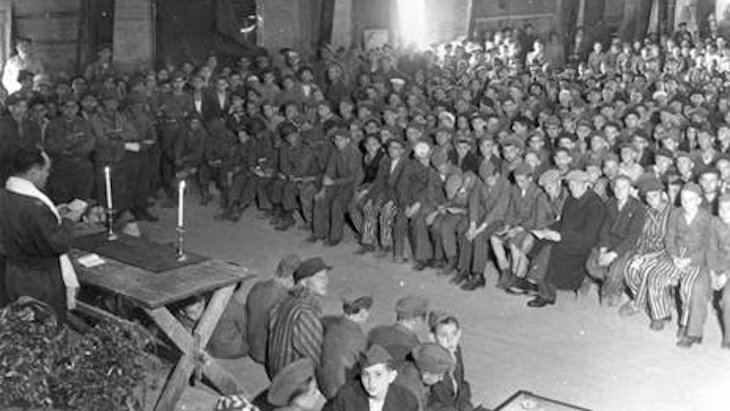 On a sunny afternoon 75 years ago this spring, Chaplain Herschel Schacter was drinking coffee with several officers from his unit, the Eighth Corps of the Third US Army, on the outskirts of Weimar, Germany, when “a friendly Colonel, a nice man” approached. “You know, this may be of interest to you,” the colonel began. “We just got word that our troops penetrated a place called Buchenwald. It’s some kind of concentration camp, I think.”

The date was April 11, 1945, and what Rabbi Schacter was about to experience would change his life forever.

Schacter and his assistant, Private Hyman Schulman, drove five miles to the site. The German guards had fled as American forces arrived earlier that day. Trembling, Schacter stepped through the front gate. His eye “caught a glimpse of a tall chimney with billowing smoke still curling upward.” It was Buchenwald’s crematorium. 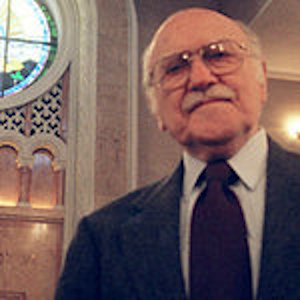 “I scarcely could believe my eyes,” he later recalled. “There I stood, face to face with piles of dead bodies strewn around, waiting to be shoveled into the furnace that was still hot. It was just an incredible, harrowing sight. I stood there for a while in utter confusion and disbelief. I then began to really feel what this horror was all about.”

A GI led the rabbi to a nearby prisoners’ barracks.

“A foul odor hit me as I entered. I saw a series of shelves, hard cold planks of wood from floor to ceiling. There were hundreds of men and a few boys lying on stinking straw sacks, looking out at me from dazed and bewildered eyes, skin and bones, more dead than alive.”

Schacter was “overwhelmed, stunned, terrified, not knowing what to say or do. Impulsively, instinctively, I shouted in Yiddish, ‘Sholom aleichem Yidden, ihr zeit frei – Greetings, Jews, you are free!’”

Raised in the heavily Jewish Brooklyn neighborhood of Brownsville, Schacter earned his rabbinical ordination at Yeshiva University, and assumed his first pulpit in Stamford, Connecticut, in 1941. Then the United States entered the war and everything changed. Members of the clergy were exempt from military service.

“But after Pearl Harbor, I felt uncomfortable that all the other young men were enlisting, and I wasn’t,” he recalled. “I couldn’t stand it.”

After completing a training course at the Army Chaplain School on the campus of Harvard University in Boston, Schacter was first stationed in New Orleans, and then San Juan, Puerto Rico. He conducted religious services for Jewish GIs, counseled them on personal matters, and gave classes.

The Caribbean would have been a pleasant place to spend the remainder of the war but in the wake of the Allies’ D-Day land invasion of continental Europe, Schacter was anxious to join his comrades on the front lines. After repeated pleas to the Office of the Chief of Chaplains in Washington, he got his wish.

Soon Schacter found himself accompanying troops into newly liberated Holland. There he presided at the first bris by Dutch Jews since the war began. The guest of honor was a baby born a year earlier in attic in Maastricht, where a young Jewish couple had been hiding from the Nazis. In the weeks to follow, Schacter conducted Passover Seders for soldiers in units that were pushing through Germany.

“Just as the ancient Children of Israel had to cross the Red Sea to celebrate the first Passover, so have we crossed the Rhine to celebrate the first Passover in Nazi Germany since the rise of Hitler,” he wrote to his family. The Jewish soldiers “had tears of joy in their eyes when we tore down a swastika flag and put up a sign with a Magen David [Star of David] over the doorway” where the Seder took place. 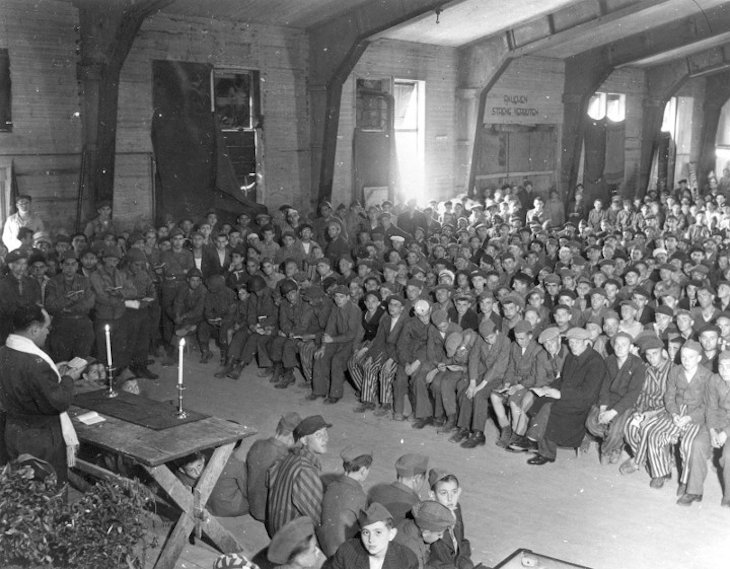 Approximately 21,000 Jews remained alive in Buchenwald on its day of liberation. When Chaplain Schacter entered their barracks, prisoner Moshe Avital later recalled, “We were afraid [because] we always associated military uniforms with the SS.”

But then they heard the rabbi call out “Yidden, ihr zeit frei!” and saw the Jewish chaplain’s symbol of the Ten Commandments on Schacter’s lapel.

“We crowded around him and hugged and kissed him,” Avital wrote. “And some asked him, ‘Why did you take so long to come?’”

They followed him as he proceeded from barracks to barracks, announcing the news of their freedom. At one point, Schacter found himself “paralyzed in front of a mound of corpses.”

He noticed a small movement from among the bodies and stepped closer. The eyes of a young boy stared out at him. After extracting the child from the pile, Schacter asked him his age.

“I’m certainly older than you,” the boy replied cryptically. Schacter recalled: “‘Older than me?’ I asked, startled. ‘What makes you think so?’

‘Because you cry and laugh as a child, while I have forgotten how to laugh and I can’t even cry. So tell me, which of us is older?’”

The eight-year-old boy, known as Lulek, was Israel Meir Lau, who grew up to become the chief rabbi of Israel.

With the permission of his superiors, Schacter returned to Buchenwald every day for the next two-and-a-half months. Neglecting his army chaplain’s duties and ignoring the constant risk of communicable diseases, he devoted himself to nursing the survivors back to life. He conducted religious services, counseled the grieving and broken, and served as their liaison to the military authorities.

Schacter compiled long lists of the survivors’ personal information, and worked with the Red Cross and Jewish relief groups to reunite the prisoners with their families. He also convinced US Army officials to set aside a nearby tract of land for a group of young men and women who established “Kibbutz Buchenwald,” a site for agricultural training in preparation for immigrating to the future State of Israel.

When the Swiss government agreed to admit several hundred children, Schacter bent rules and forged documents to include many additional passengers on the train, even hiding mothers in the train cars’ bathrooms so they would not be separated from their children.

Schacter joined them on the long train ride to Switzerland, and emerged victorious from a tense standoff with border officials, who accused him of bringing more orphans than permitted.

The American Jewish military chaplains who were sent to Europe during World War II had no advance warning or training for dealing with survivors of death camps. Schacter rose to the challenges posed by extraordinary and unimaginable circumstances, and the survivors whom he impacted regarded him as having saved their lives.

Schacter’s months in Buchenwald deeply affected his own life as well. In the short run, he served as the voice of the survivors in a coast-to-coast speaking tour in 1946 that drew the American public’s attention to the plight of displaced persons, and the need for a Jewish homeland.

Rabbi Hershel Schacter’s personal connection to the Nazi genocide inspired him to devote his life to Jewish communal service; first as a major figure in the revitalization of American Orthodox Judaism in the 1950s and early 1960s, then as an early leader of the Soviet Jewry protest movement, and finally as the first Orthodox rabbi to chair the Conference of Presidents of Major American Jewish Organizations.

Through his decades of community leadership, there pulsed a sense of commitment that had been nurtured in the crucible of Buchenwald, where Schacter had witnessed the ultimate, tragic toll of inhumanity.

This essay was adapted from the author's forthcoming biography of Rabbi Herschel Schacter and originally appeared in the Jerusalem Post.

How I Survived the Kovno Ghetto
Blessing on Chewing Gum
Was Rahab a Prostitute?
Extras In Our Own Epic
Comments
MOST POPULAR IN Holocaust Studies
Our privacy policy