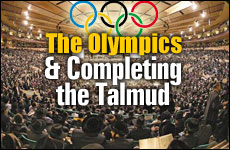 The stark contrast of the two events sheds light on what it means to be a Jew.

Twenty-five hundred years ago a tradition was started in a Mediterranean region, subsequently known as Greece. Once in four years a fierce competition was held to determine which person was the swiftest, strongest and most agile. It was an event that celebrated the beauty and grace of the human body, the limits that it can be pushed to, the drive and spirit of these who wanted to be best at all cost. It also created a sense of unity amongst the peoples of the Hellenistic civilization.

We are celebrating a revival of that tradition after a lapse of about 1500 years in the form of the Olympic Games that are taking place these days.

There was another tradition that started 3500 years ago in the Near East. The Torah was given to the Jewish nation, as a beacon of light meant ultimately to draw all nations of the world. The tradition of Torah, both written and oral law, continued uninterrupted till this day. Once in seven years the entire nation would come together in Jerusalem to read significant portions of the Torah. Although this came to an end with the destruction of the Temple, a new tradition arose two millennium later. About 90 years ago, Rabbi Meir Shapiro, a great rabbi from Lublin, Poland,  implemented a "page a day" study program of Talmud. This would ensure universal Jewish literacy and create a sense of unity amongst the Jewish people.

At the conclusion of this cycle – once every seven and a half years – a huge celebration of "Siyum HaShas," the completion of the Talmud is held. The program started successfully, was devastated during World War II years and slowly came back. Last week, the twelfth "Siyum" was held at Metlife Stadium, with over 90,000 people in attendance and tens of thousands the world over participating via hookup and local celebrations.

I was privileged to be there. It was an event moving and inspiring beyond words. But it was for me a time of reflection about what it means to be a Jew, one of the "chosen."

I could not help but reflect at the coincidence of the event happening in a sports stadium at the same time of the Olympics. The contrast in events brought home to me what it means to be a Torah Jew, in a most impactful way.

Let me itemize the three stark contrasts that struck me:

One of the prayers we recited on Sabbath reads, "And when the tens of thousands people of your nation gather together, they praise your name joyfully." The simple meaning is that Jews gather in great numbers in order to engage in the activity of singing God's praises. Looking at the crowd a new meaning of the prayer dawned on me. The comportment and demeanor of the Jewish People as they gather in the tens of thousands is in itself the greatest hymn of praise to God.

The morning after, as I recited the blessing before the study of Torah, the words jumped at me: "Blessed are You … who has chosen us from amongst all nations and given us Your Torah." How fortunate are we that our life focuses on the spiritual and intellect. How honored we are that we have been chosen to live a hard life in a mundane world, and then to accept the difficult yoke of infusing it with spirit. How privileged we are to act as a paradigm to the world of what man's true achievements are. How privileged we are to be given the task of refining ourselves to a degree that we become a light unto nations.

I look forward to the day when humanity will take note of this and also choose to become chosen.

Durban: A Circus of Calumny
Extras In Our Own Epic
Evolution 2.0: The Coming Darwinian Revolution
Chukat 5782: Let’s Play the Blame Game!
Comments
MOST POPULAR IN Israel
Our privacy policy