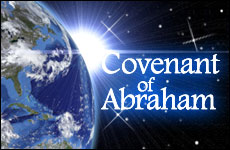 The father of the Jewish people is a beacon for all humanity.

On one level, the covenant refers to material blessing. Abraham’s descendants will be numerous, and will inherit a land uniquely suited to facilitate their unique role in human history:

Father of All Nations

In addition to the relationship between God and Abraham’s offspring, the Covenant of Abraham also concerns itself with the relationship between Abraham’s offspring and the rest of humanity. “Through you shall all the nations of the earth be blessed” (Genesis 12:3). This exhortation is the origin of the unique and central role that Jews have played on the stage of human history. The “Chosen People,” as it were.

Abram’s ideological crusade must concern itself with all humanity.

The scope of Abram’s influence is not limited to his own biological descendants. Abram’s ideological crusade must concern itself with all humanity. God adds the Hebrew letter hey to Abram’s name to render him “Avraham,” an acronym for Av Hamon Goyim – "the father of a multitude of nations.” Abraham has outgrown his original mission. His horizons are expanded and all of humanity now falls into his orbit.

In a palpable sense, Abraham becomes responsible for the spiritual and physical welfare of the entire world. It is a role that he embraces. When God informs Abraham that he intends to destroy the profoundly wicked city of Sodom, Abraham makes an impassioned plea for God to reconsider. One can’t help but wonder why Abraham should be so concerned with the fate of a people who represented the antithesis of all that Abraham stood for. A lesser man would have been ecstatic at seeing his ideological foes vanquished by God’s hand. Yet Abraham remonstrates with God, serious in his role of being responsible for all mankind.

The Sages note that it was precisely this trait of universal concern which stamped Abraham as the standard bearer of God’s message. There had been other righteous men who preceded Abraham – Adam, Enoch, Methuselah, Noah, Shem and others. To assert that Abraham was the founder of monotheism is untrue. Abraham did not discover God, nor was he the first to remain faithful to Him. The Torah itself testifies regarding the righteousness of Enoch and Noah (Genesis 5:22, 6:9).

What distinguishes Abraham, then, is his commitment to represent those beliefs to all of mankind. His predecessors, righteous as they were, were either content to remain individuals marching against the wave of paganism which had engulfed the world, or incapable of doing much to stem that tide. Abraham, on the other hand, long before God’s first communication, embarked on a mission to spread the message of ethical monotheism, hoping to change the very course of human history.

Abraham, in partnership with Sarah, tirelessly disseminated the message of One God who did not merely fashion the universe ex nihilo and then lose interest, allowing it to function independently or designating intermediaries to do His bidding. Rather, God desires a relationship with man and imposes upon him universal standards of morality applicable to all – thus leading mankind toward the ultimate destiny, the global recognition of God’s sovereignty. This idea of the God of History was perhaps Abraham’s single greatest intellectual contribution.

If the statistics are right, the Jews constitute but one percent of the human race. It suggests a nebulous dim puff of star dust lost in the blaze of the Milky Way. Properly the Jew ought hardly to be heard of; but he is heard of, has always been heard of...

The Egyptian, the Babylonian, and the Persian rose, filled the planet with sound and splendor, then faded to dream-stuff and passed away; the Greek and the Roman followed, and made a vast noise, and they are gone; other peoples have sprung up and held their torch high for a time, but it burned out, and they sit in twilight now, or have vanished. The Jew saw them all, beat them all, and is now what he always was, exhibiting no decadence, no infirmities of age, no weakening of his parts, no slowing of his energies, no dulling of his alert and aggressive mind.

All things are mortal but the Jew; all other forces pass, but he remains. What is the secret of his immortality?

Certainly, the laws of nature dictate an exceedingly small statistical probability of national survival over 4,000 years. When we consider the context of Jewish history – with its exiles, dispersion and incessant persecution – the likelihood of survival is infinitesimal. Yet one needn’t wonder at this phenomenon; the Director of History promised Abraham that it would be so.

The miracle of Jewish survival is rooted in the very essence of Jewish formation. All the matriarchs were barren from birth; the Sages assert that Sarah even lacked a womb in which to carry a child. It was only after years of tearful prayer that the righteous matriarchs were able to conceive those who would go on to form the emerging nation of Israel.

The matriarchs conceived their children in a miraculous fashion because, as God sought to make clear at the outset, the Jewish nation would always transcend the “natural realm.” From our very inception, Jews would be guided by different forces than those which govern the rest of humanity.

God took Abraham out of the realm to which the other nations are tied.

This idea finds expression in the biblical text. At one point, Abraham questions the value of “eternal reward” in light of the fact that he was childless. God “took him outside, and said ‘Gaze, now, toward the heavens and count the stars if you are able to number them… So shall your offspring be!’” (Genesis 15:5)

The simple meaning of the text is that God took Abraham outside of his tent to enable him to gaze up at the stars. The midrashic explanation is infinitely more profound. God took Abraham out of the realm of the constellations, the planetary influences to which the fate of other nations is tied. The Guardian of Israel, however, is God Himself. Abraham and his descendants are impervious to the natural limitations and statistical probabilities which bind the rest of humanity.

The transcendent nature of the Jewish people is alluded to in the Covenant of Circumcision which God instructs to take place on the eighth day (Genesis 17:12). What renders the eighth day uniquely appropriate for the sealing of this covenant?

Biblical numbers are never arbitrary. The number seven is invariably linked with a natural order: seven days of the week, seven notes of the musical scale, etc. By extension, it follows that the subsequent number – eight – represents the transcending of natural order, i.e. God’s direct intervention.

Thus God commands the Jewish nation to seal His covenant specifically on the eighth day, for it is this day, above all others, which symbolizes the unique nature of God’s interaction with His Chosen Nation. They will be born improbably, they will live improbably, and they will survive and flourish improbably – in utter defiance of every law of nature.

This is represented by the very act of circumcision. If God is perfect, why did He create the human body requiring human edification? Because it is His will that perfection be accomplished through the agency of human beings. Circumcision teaches that just as the body must be perfected, so too, we must strive to perfect our souls.

Each and every generation of Jews is charged with the sacred responsibility of tikkun olam (perfecting the world), and serving as the moral compass of all humanity. The fact that generations of Jews may stray from these ideals in no way alters the underlying goal.

Incredibly, the rite of circumcision has always been carefully maintained by Jews throughout the ages. This is compelling evidence that God’s eternal bond remains, inviting us to become the beacon to all humanity, as God charged Abraham’s offspring to be.

Abraham and Healthy Spirituality
The Softball Player
How This 6 Generation Bread Baker Brought Back Israel’s Ancient Grains
Olivia Newton John’s Grandfather was a Nobel-Prize Winning Jewish Physicist
Comments
MOST POPULAR IN The Bible
Our privacy policy
Aish.com Is Looking for Great Writers