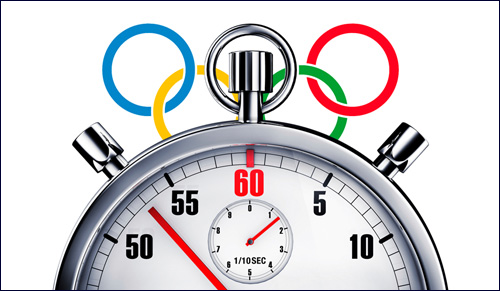 What a difference a fraction of a second makes!

It is a lifelong dream for the finest athletes in the world. Incredible effort, preparation and total dedication for many years are put into the hope of standing on the podium to be recognized as the gold-medal winner.

Only one person can achieve that goal. Even the silver and bronze winners feel the keen pain of failure.

And what differentiates between coming out on top or being condemned to agonize over what might have been is usually a split second. At the Olympic Aquatics Stadium in Rio de Janeiro, in the women’s 100 meter breaststroke finals, Lily King of the United States bested Yulia Efimova with a clocking of 1:04.93. This was King’s best time ever and an Olympic record. Efimova was second in 1:05.50 - nineteen hundredths of a second ahead of Kings teammate, Katie Meili, who placed third. Three contestants separated by the merest fraction of less than a second – yet with such totally different results in terms of final standing!

“Just a second” we so often casually say, in a manner implying complete indifference to its significance. The Olympics remind us that even a fraction of a second can change the world as well as the identity of its greatest heroes.

The Olympics remind us that even a fraction of a second can change the world as well as the identity of its greatest heroes.

It is ironic that the Olympics should serve as reminder of one of the most powerful spiritual messages – a message that Jews were the first to acknowledge, as the Irish author Thomas Cahill recorded in his best-selling book The Gift of the Jews.

Before the Jews and the Torah, Cahill notes, time was considered of no particular value. People were born, lived and died, in an ongoing and meaningless cycle. It was the Torah which saw fit to define time as holy. In fact, the sanctification of the moon and the month was the very first mitzvah given to the Jewish people. Time was the definition of life itself. Time was transient. Time passed quickly and demanded attention. Time, for the Jews – and through the Bible to the world at large – became the measure by which we recorded our triumphs and failures, took note of passing events, commemorated our festivals and recorded our history.

There are still people today who want only “to kill time.” It is a self-defeating goal. We cannot kill time because time kills us. Time is the greatest reminder of our mortality. And only by acknowledging it can we succeed in being victorious over its constraints.

“Teach us to number our days” was the prayer of King David in the book of Psalms. Every day ought to count in some way; the sum total of our days is the divine judgment of the meaning and purpose of our lives.

Our Sages taught that “there are some who can acquire their share in the world to come in the mere span of one hour.” Jewish mystics remind us of a remarkable numerical linkage. The biblical lifespan is 70 years. 70×365 days is 25,550. Multiply the number of our days by 24, and our total number of hours on earth is just a little over 613,000 – a correspondence with the 613 mitzvot, in order to teach us that every hour of our lives should be concerned with fulfilling God’s will a thousandfold!

I do not remember where I saw it but the following story is an amazing metaphor for life.

Imagine there is a bank account that credits your account each morning with $86,400. It carries over no balance from day to day. Every evening the bank deletes whatever part of the balance you failed to use during the day. What would you do? Draw out every cent, of course.

Each of us has such a bank. Its name is TIME. Every morning, it credits you with 86,400 seconds – twenty-four hours times sixty minutes time sixty seconds. Every night it writes off as lost whatever of this you have failed to invest to a good purpose. It carries over no balance. It allows no over draft. Each day it opens a new account for you. Each night it erases the remains of the day. If you fail to use the day's deposits, the loss is yours. There is no drawing against "tomorrow." You must live in the present on today's deposits. Invest it so as to get from it the utmost in health, happiness and success.

The clock for every one of us keeps running. The days, the hours, the minutes – and yes, even the seconds quickly move at their unstoppable pace. But we can change the course of our lives even in a small fraction of time as a second. Perhaps that’s why it’s called a “second” – because it gives us a second chance to rectify our mistakes, to redirect our goals, to redefine our values, to become better versions of who we are from the perspective of who we could be.

Just a second, after all, is what the Olympics teach us makes the difference between winning the gold or weeping for what might have been.

(Thanks to Michael Hoenig for suggesting I write on this theme.)

The World Cup Is Not Coming Home and I'm Not Disappointed