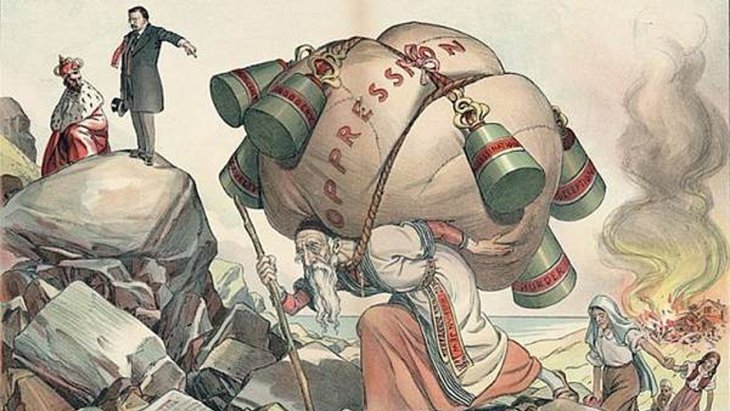 On October 31st, 1905, thousands of Jews lost their lives in violence that swept across Russia.

For most people October 31 is a day of parties and dressing up in costumes. But just over a century ago, October 31, 1905 was a tragic day, ushering in hundreds of pogroms that killed thousands of Jews across Russia. Crowds surged through the streets, yelling threats, destroying property, and murdering Jewish men, women and children with impunity.

The immediate cause of this seismic wave of violence was the October Manifesto, a declaration from Czar Nicholas II guaranteeing basic freedoms and political rights. Promulgated on October 30, 1905 (sometimes referred to as October 17 on Russia’s “Old Calendar”), the declaration came amid rising political turmoil and the threat of revolution. Instead of calming tensions, the manifesto led to huge demonstrations and riots in many Russian cities. Tragically, it was Russia’s Jews who suffered the most.

In the city of Odessa, crowds rushed into the street to celebrate the manifesto. One student recorded that “a joyous crowd appeared in the streets; people greeted each other as if it were a holiday.” Among the throngs were many Jews who believed the new laws would help grant them long-sought legal rights. But violent scuffles soon broke out. 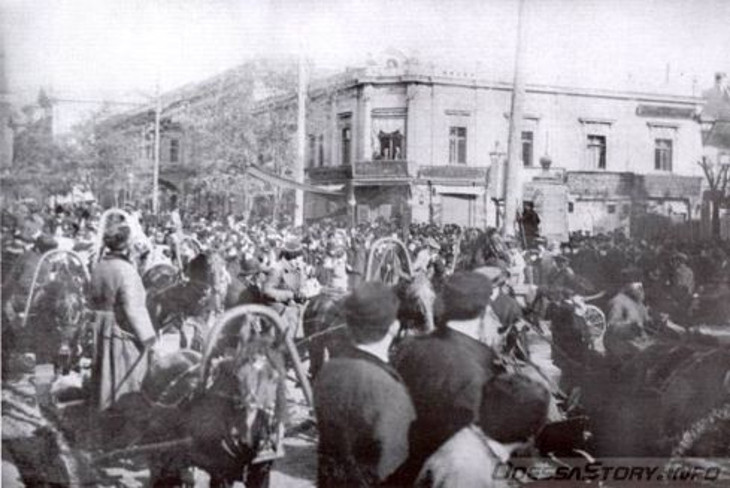 As the mood in Odessa darkened, many Russians began turning on the city’s Jews with almost unimaginable sadism. At first, angry rioters beat Jews in the streets and ransacked the homes and businesses belonging to local Jews. The extreme right-wing anti-Semitic group, the Black Hundreds, entered the fray, encouraging pro-Czar Russians to blame Jews for their country’s ills. When a city official was shot dead, the surging crowds became enraged and attacks accelerated, turning into a violent pogrom that lasted several days. The police either turned a blind eye or eagerly participated in the attacks.

Eyewitnesses described Jews being thrown out of high windows to their deaths. Jewish children were murdered in front of their parents. Rioters targeted Jewish pregnant women, assaulting them and killing some by cutting open their stomachs. Parents were tortured by watching their children die. By the time the pogrom was over, over 400 Jews were dead and about 300 injured in Odessa alone. 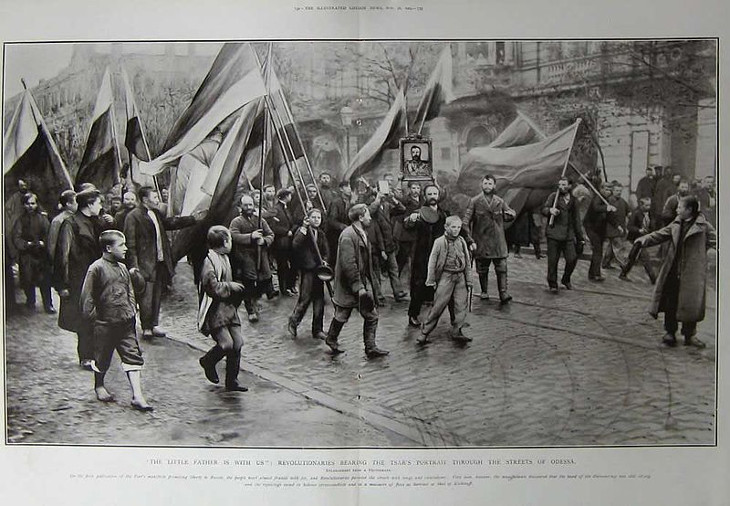 October 31 saw hundreds of other pogroms across Russia, mostly in the south. 690 pogroms cost 4,000 Jews their lives; the wave of hatred and murder saw another 10,000 Jews injured.

In the Belarusian town of Rechysta, local Jews, many of whom belonged to Communist and Communist-Zionist groups, organized to defend themselves from murderous mobs. The threat of violence was high: local Black Hundred members issued warnings calling Jews “enemies of the Czar” and demanding Jews’ “extermination”. Police officers distributed rifles to townspeople, and a parish priest announced “the Jews should be killed to a man, since they want to overthrow the Czar.” Violence erupted in the town when some locals beat up Jewish businesswomen and ripped up the dry goods they were selling.

About twenty Jewish men organized and fought back, but were soon hopelessly overwhelmed. One Jewish fighter, Noi Geizentsveig, later explained, “We did not see the enemy during the skirmish, therefore we did not throw the bombs (the Jewish self-defense group had acquired) and responded by aimless shooting." The Jewish fighters were overwhelmed; local thugs shot and stabbed them, yelling “Here is your freedom!” and “Here is your constitution!”, references to the October Manifesto they blamed the Jews for bringing about. 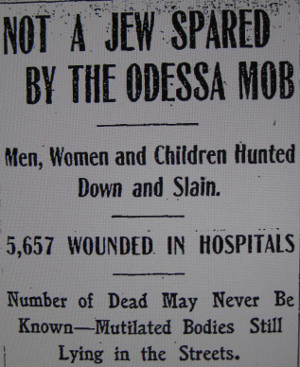 Within hours, eight Jewish fighters were murdered and twelve were wounded. They were dragged to the town’s police station and locked up with no food, water, or medical care, dead fighters together with those still living. Later on, the fighters who were still alive were consigned to house arrest, denied medical care even though some were severely injured.

The final pogrom of the hundreds that started October 31, 1905 was in the town of Bialystok (in present day Poland). Eighty-two Jews were murdered in those few convulsive days of violence, and about 700 people were injured. Czar Nicholas II dispatched officials throughout Russia’s territory to report back on the pogroms, which dissipated nearly as abruptly as they began. 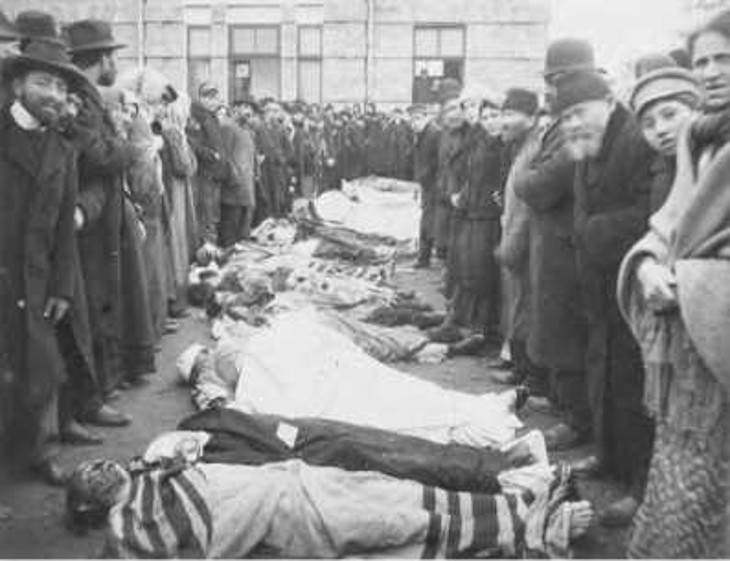 Victims of the Kiev Pogrom

For many Russian Jews, the October 31 pogroms was proof that they had no future in Russia and spurred many to leave. One Russian Jew who fled was the famous Yiddish writer Shalom Aleichem. He and his family watched three days of pogroms overwhelm the Jewish community of Kiev from their hiding spots in one of the town’s hotels. When the violence was over, they hastily made plans to flee Russia, eventually moving to America.

On November 25, 1905, three weeks after the terrifying pogrom and just before he left Russia for good, Shalom Aleichem wrote to a friend in New York, Dr. Maurice Fishberg, begging him to use his influence with American Jews to encourage the United States not to help Czar Nicholas II (who was embroiled in the Russo-Japanese War and was looking for a loan). After watching his fellow Jews murdered in cold blood, Shalom Aleichem, like many Russian Jews, despaired of Jews’ future there. “Six million Jews” in Russia could be “murdered” there, the author wrote, in a long, impassioned letter about Russian politics and the war.

Over a century after the horrible spasm of violence that consumed much of Russia, we owe it to the many thousands of Russian Jews massacred in the pogroms of October 31, 1905, to remember their deaths and honor their memories.

Flowers and Judaism: 8 Facts
It Takes A Lot Of Faith To Be An Atheist
How Instagram Brought Back This Nostalgic Soup
What Makes Eli Run?
Comments
MOST POPULAR IN Israel
Our privacy policy