The Most Powerful Parenting Technique 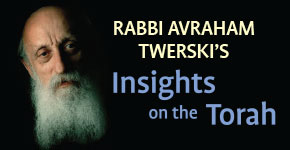 He (Lot) said, “Behold now, my lords; turn about please, to your servant’s house; spend the night and wash your feet, then wake up early and go your way…” He made a feast for them and baked matzos, and they ate (19:2-3).

Many books have been written about parenting. There is universal agreement that the single greatest influence on children is their parents’ behavior. All other techniques parents may employ are not nearly as effective as what they themselves do. Parental behavior is deeply engrained in children.

The Torah teaches us this in the character of Lot. Lot was a rogue who rejected Abraham, saying, “I want neither Abram nor his God” (Rashi, Genesis 13:11). Lot chose to live in the corrupt city of Sodom, fully aware of their decadence (ibid 13:13). He married a woman of Sodom, who turned into a pillar of salt as punishment because when Lot asked her to give his guests salt, she said, ”Are you trying to bring this wicked trait of hospitality to us?” (Midrash). According to the Midrash, giving food and shelter to wayfarers was punishable by death in Sodom.

Yet this depraved scoundrel, Lot, risked his life to take in guests, and indeed aroused the entire populace against him. He put himself in even greater danger when he defied the populace and sought to protect his guests. This seems to be incongruous with his degenerate character.

R’ Meir Rubman (Zichron Meir) says that having been exposed to his Uncle Abraham in his youth and having witnessed the overwhelming dedication which Abraham had to hachnasas orchim, welcoming guests, made an indelible impression on Lot. There is every reason to believe that Lot assimilated to his environment, and indeed, he was spared from the destruction of Sodom solely because he was Abraham’s nephew (Rashi, Genesis 19:17). In spite of his depravity, he could not extirpate this particular trait, to the point of risking his life to be hospitable to guests.

This is a convincing example of the power of early imprinting. It is commonplace that children who were victims of parental abuse may swear that they will never be harsh to their children, yet they often repeat the very abuse they despised. This may seem to defy logic. However, the early imprinting of a behavior may overwhelm logic. There is only one effective method to teach children proper behavior, and that is for parents to practice it themselves.

Standing Up to Antisemitism: 5 Courageous People
Liz Kennedy’s Mission to Help Women become Magnetic
The Non-Jewish Nanny Educating the World about Judaism
Pizza Latkes
Jewish Valor at Pearl Harbor
The History of the Jews of Turkey