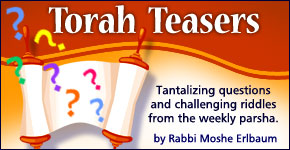 2. In this parsha, who is referred to as being "elderly" with the expression Zaken or Zekainim? (4 answers)

The Torah refers to both Avraham and Sarah as "elderly" (Genesis 18:11). Later on, the Torah describes the crowd that converged on Lot's house as ranging "from young to old" (Genesis 19:4). Lastly, the daughters of Lot called their father a Zakein (Genesis 19:31).

3. In this parsha, which two people question Hashem about killing a tzaddik (righteous person)?

Lot's wife turns around and becomes "a pillar of salt" (Genesis 19:26). Salt is not mentioned again until Leviticus 2:13 with regard to the salt required for korbonot.

6. Aside from the book of Genesis, where else do the cities of Sodom and Amora appear in the Torah?

The song in Parshat Ha'azinu mentions Sodom and Amora (Deut. 32:32).

7. In this parsha, who became intoxicated with wine? What other two people in the book of Genesis became drunk?

Avraham arose early to look at what happened to Sodom (Genesis 19:27), to send away Hagar and Yishmael (Genesis 21:14), and to travel to the Akeida (Genesis 22:3). In this parsha, Avimelech also "arose early in the morning" to consult with his advisors after Hashem tells him in a dream that Avraham is married to Sarah (Genesis 20:8).

9. Which two people give the same exact gifts to each other?

The binding of Yitzhak occurs on the third day of their journey to the land of Moriah (Genesis 22:4). Lavan is informed after three days that Yaakov has run away (Genesis 31:22). Shimon and Levi wipe out the city of Shchem on the third day after the circumcision of the residents (Genesis 34:25). Pharaoh makes a birthday party on the third day after the butler's and baker's dreams (Genesis 40:20). Yosef lets his brothers out of jail on the third day of their imprisonment (Genesis 42:18).
Like What You Read?  Give Jews around the world the chance to experience engaging Jewish wisdom with more articles and videos on Aish. It would make your mother so proud and as a nonprofit organization it's your support that keeps us going. Thanks a ton!