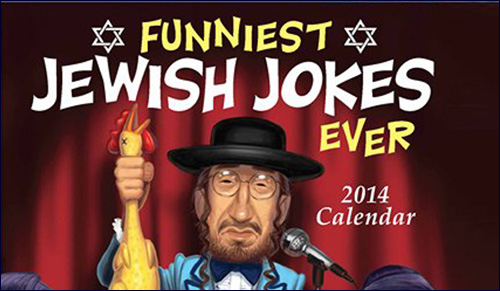 As we celebrate Hanukkah what better way to enjoy than with humor? Are these funnier in 2014, than 2013? Of course! With each passing year, we laugh more

So once again, I’ve written a Jewish humor calendar, available on Amazon, plus other online outlets, and even bookstores, if you can find one. For you, my dear readers and friends here is a sampling from The Funniest Jewish Jokes Ever Calendar 2014. To read it all, or bring as a gift in exchange for a latke buffet.

Eve tenderly turns to Adam and asks: "But, do you really love me?"

In over 20 years of writing Jewish humor, I think I’ve heard every single Jewish joke every told, written, and repeated in books, online, from records (those round vinyl things), and from comedians. I’ve even made up a few (hundred) myself.

On such Jewish Joke overload, you can imagine how long it takes to choose between thousand I’ve heard and used. Yet, among the tens of thousands, there are some that still make me slap my good knee (a hard find these days).

So for you, dear readers, I bring you these special quintessentially Jewish jokes.

Adam and Eve are sitting in the Garden of Eden, holding hands and watching a beautiful sunset. As a soft breeze gently sweeps over them, Eve tenderly turns to Adam and asks: "But, do you really love me?"

To which Adam replies, "Who else?"

Yeshiva University decides to create a crew team. Unfortunately, they lose race after race. Every day, they practice for hours and hours but always come in dead last. Finally they send Yankel to spy on the Harvard team.

Yankel shleps off to Cambridge and hides in the bushes off the Charles River from where he secretly watches the Harvard team practice. After two days, he returns, satisfied.

“I figured out how they do it,” says Yankel to his eager teammates. “They have eight fellows rowing and only one fellow screaming!”

A priest, a preacher and a rabbi meet regularly. All agree that preaching isn't that hard. A challenge would be to preach to a bear. So they go into the woods, find a bear, preach, and attempt to convert it. Afterwards, they compare notes.

Father Flannery, arm in a sling, says, "I read to my bear from the Catechism. Well, that bear was tough. I sprinkled him with holy water, and Sunday he’s taking his first communion."

Reverend Jones, in a wheelchair says, “I read to the bear from God's Holy Word! But he wrestled me near a creek. I baptized him. We spent the day praising Jesus."

They both look at the rabbi in a full body cast. “Oy. Looking back, circumcision may not have been the best way to start."

David receives a parrot for his Bar Mitzvah. This parrot had one bad attitude and worse vocabulary. David tries to teach him manners, but the bird just gets ruder and cruder. Desperate, David puts him in the freezer to cool off. He hears squawking, then quiet. Frightened, David quickly opens the freezer.

The parrot calmly walks out and says: "I'm sorry I offended you, Master David. I shall go to synagogue, pray, and modify my behavior.” Before David can ask about this astounding change, the parrot continues: "Sir ... may I ask what the Empire chicken did?"

By HIM, He’s a Doctor

Dr. Siegel dies and goes to heaven. He informs the admitting Angel of his status.

“Where are the best quarters here?”

“Everyone’s equal,” says the Angel. The doctor harrumphs, but could eat a little something. The Angel directs him to the end of a long cafeteria line.

Again: “Everyone’s equal here. You must wait your turn.”

Siegel then sees a white-haired man with a lab coat and stethoscope walk to the front of the line! Very upset, he runs to the Angel. “That doctor just cut in front!”

At a concert in Israel, Malke, the lead singer of Israel’s most famous Jewish rap group, asks the audience for quiet. When not a sound could be heard from the massive crowd, he starts to slowly clap his hands. Holding the audience in total silence, he says into the microphone, "I want you to think about something. Every time I clap my hands, a child in Africa dies."

A voice from the front of the audience yells out ..."Nu – so stop clapping!"

The Funniest Jewish Jokes Ever Calendar 2014 is dedicated in loving memory to my husband, Ian T. Macauley, and my beloved cousin, Lois Fern Jaffe.