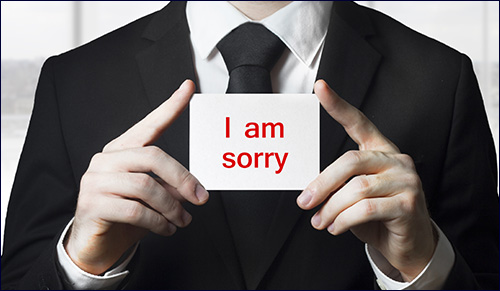 The biggest activity we do on Yom Kippur is not repenting; it is apologizing.

Nearly twenty years ago when our second child was born, we lived in a Baltimore apartment complex with many Orthodox young couples. Whenever one family would be blessed with a child, the other families would provide two weeks’ worth of suppers. We were very grateful to become recipients of such kindness, one we repaid several times before and since.

One night during those two exhausting weeks, dinner never arrived. It turned out that the woman who volunteered to make us supper that night plumb forgot about it. No doubt she agreed to prepare a meal when asked, and then promptly hung up the phone and forgot all about it.

In actuality, it made very little difference to us at the time. As we found, when people make meals for others, they tend to round the quantities way up just to be safe. As a result, during those two weeks we were basically inundated with more food than we knew what to do with. And so, we were thus actually relieved not to have received yet another pan-full of chicken and rice, allowing us to dig into our ever-growing collection of half-eaten leftovers.

But the poor woman who had forgotten about us had no such consolation. She was utterly mortified, having let down a family in its time of need. And from that point on, for the remaining years we lived in Baltimore, my wife noticed something about that person. She basically began avoiding my wife, making sure never to come face to face with her again. (You know, you're in one aisle in the supermarket and she makes sure to take a different one...) She was just too ashamed to come before my wife after (in her mind) wronging us so deeply in our time of need.

Now I am quite certain that that woman never repeated her mistake again. No doubt she bought an appointment book, started tying strings around her finger, began writing notes on her fridge, etc. Who wants to go through such embarrassment again?

But she failed to do one thing – to own up to the people she had wronged (or at least thought she had wronged). Instead she simply avoided my wife – never even giving her the chance to explain how little a difference it actually made to us. They could have laughed off the entire episode and lived happily ever after. But she stayed away, and my wife, for her part, never felt comfortable enough to approach her either.

We tend to think of repentance as the equivalent of New Year’s resolutions – a chance to correct our past mistakes and start fresh for the new year. This year we will be greater, different. We will not repeat the same errors and indiscretions of last year. And we will never again have to endure the awkwardness of living with the consequences of our past mistakes.

The biggest activity we do on Yom Kippur is not repenting; it is apologizing.

But that is really only a part of it. Repentance is not just about personal introspection and self-improvement. It is about coming back. It means coming face to face with the one you have wronged (as well as the One you have wronged), asking his forgiveness, and patching up the relationship. Maimonides describes the obligation to confess as saying, “Please God, I have sinned, trespassed, and rebelled before You and I have done such and such…” (Laws of Repentance 1:1). You have to stand up and talk to God – as well as to any of the people you may have wronged. You have to return to Him and beg His forgiveness. You will fix your future too but you must first make up for your past.

The biggest activity we do on Yom Kippur is not repenting; it is apologizing. In synagogue we recite the viduy confession ten times throughout the day. We stand up before God and say “I am sorry. This is what I have done…” Of course, apologizing without intending to improve for the future is not much of an apology. But it begins with the apology, with the standing before God. Repentance is merely the demonstration that you really mean it.

At the start of his Laws of Repentance, Maimonides writes as follows:

All the commandments of the Torah, whether positive or negative, if a person transgressed one of them, whether purposely or inadvertently, when he repents and returns from his sin, he is obligated to confess before the Almighty, blessed be He.

Yom Kippur is not about personal resolutions and private reflection. It is about talking to God.

In a work presumably about repentance, Maimonides makes almost no mention of repentance itself! He practically glosses over it, focusing entirely on our obligation to confess. And this is again because Yom Kippur is not about personal resolutions and private reflection. It is about standing up and talking to God. It is about apologizing, about reestablishing our connection with our Creator. We must tell God who we are, where we are holding in life, and what we know needs improvement. And naturally, we much actually improve as well – assuming we really mean what we are saying.

We all know how hard it is to come face to face with the person we wronged. How do we broach so awkward a topic? Who knows how he will react? We would rather spend the rest of our days avoiding our victims than having to actually see them again.

Happily, with God it is not so. He is loving and patient, and He eagerly awaits our apology. “A heart broken and humbled, oh God, You will not disdain” (Psalms 51:19). Unlike approaching the people we have hurt, apologizing to God is really quite easy and welcome. And besides, He knows what we did to Him anyway. But repentance must begin with the apology. Talk to the one you have wronged, apologize for your failings – and the improvement is sure to follow.