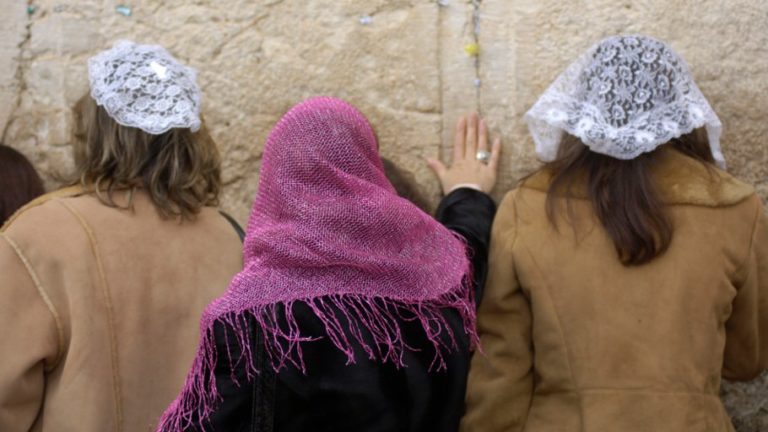 Personal and poetic, these Yiddish prayers, often written by Jewish women , are among the least-known but most beautiful of Jewish prayers.

They are intimate and personal, poetic and beautiful. They address the deepest longings of human nature and put hope into words. They are among the least-known but most beautiful of Jewish prayers, Tehinot, often in Yiddish, primarily aimed at and often written by Jewish women through the ages. Their words carry the cargo of thousands of prayers and it’s time these works were better known.

Tehinot originated among Jewish communities in Germanic lands in the early Middle Ages. At the time, there were three “Jewish” languages in use: Hebrew; Aramaic (a language similar to Hebrew in which some key Jewish texts, including the Talmud, are penned); and Yiddish, a hybrid language that incorporates both Hebrew and European linguistic roots and became the daily language of many European Jews.

Unlike their Christian counterparts, Medieval Jewish women were typically educated and able to read and write. Demands that all Jews pray and study Jewish texts meant that Jewish communities had high levels of literacy and schools were ubiquitous. Yet for many Jewish women, fluency in Yiddish came easier. Jewish girls were often educated at home, by their mothers, and the homely mama loshen (mother tongue) of Yiddish was often their first and most fluent language. It seemed natural for many women that when they turned to God to pour out their hearts in prayer, they would reach for words in Yiddish where they felt most comfortable. 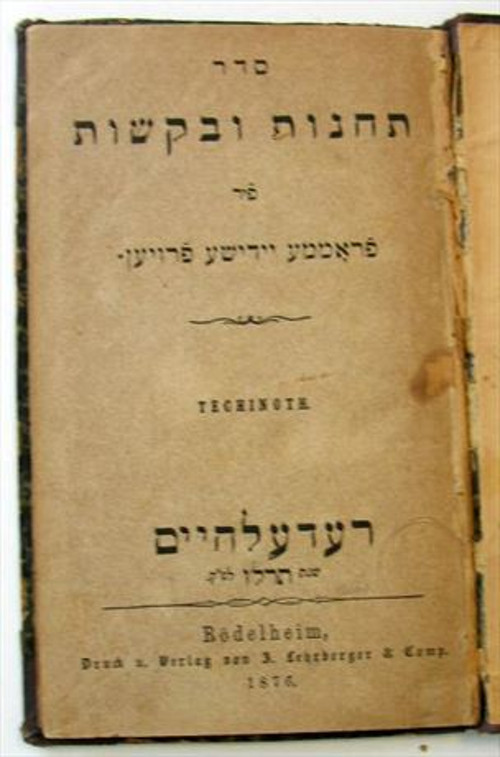 In time, whole books of Yiddish prayers, called Tehinot, were written. Some Tehinot were aimed at men, but most were focused on women. Many Tehinot were meant to be recited before traditionally female activities such as lighting Shabbat candles, sending children off to school, or making the blessing that’s recited over challah dough. They speak to some of the most intimate moments in a woman’s life, offering both a moving way to pray and also affording a glimpse into Jewish women’s lives over the past thousand years.

Many were written by women themselves. “As authors, Jewish women held equal status with their male counterparts” notes Yiddish scholar Dr. Devra Kay. One of the earliest books of Tehinot that proclaimed female authorship was Eyn Gor Sheyne Tkhine (“A Very Beautiful Tehine”), published in Prague in about the year 1600. The exact names of the authors are unknown; they simply called themselves “a group of pious women”.

These Tehinot are vehicles for raw and intimate connections with the Divine. Their beauty and the way they assume Jewish women have an intrinsic and strong relationship with God can be startling to modern readers. Writing about Tehinot in 1995, Norman Tarnor shares the surprise he felt at the powerful emotions of Tehinot when he first encountered them, especially they way they attempted “to establish the Jewish woman’s or Jewish man’s spiritual connections with their Creator.”

In many Orthodox communities, women continue to recite Tehinot, often in the original Yiddish of their authors. Some contemporary popular Jewish prayer books continue to include a few Tehinot: The Complete Artscroll Siddur, for instance, includes the beautiful Tehine called Gutt Fun Avrohom (“God of Abraham”), written by Rabbi Levi Yitzchak of Berditchev (1740-1809), and typically said by both women and men at the conclusion of Shabbat. As Shabbat ends and a new workweek dawns, this prayer beautifully asks “May this week arrive for kindness, for good fortune, for blessing, for success, for good health, for wealth and honor, and for children, life, and sustenance, for us and for all Israel. Amen.”

Here’s a taste of some other Tehinot for various life experiences, as well as suggestions for where to find more of these unique and powerful prayers.

Rivke Tiktiner was a 17th Century teacher and author who wrote a book of beautiful Yiddish prayer titled Meinekes Rivke (“Rebecca’s Nurse”), which first appeared in print in 1609. Little is known about her personal life, but her grave is located in the old Jewish cemetery in Prague. She wrote incredibly powerful, vivid Tehinot to be said every day and on special holidays. Here is a excerpt.

Give me a pure, fresh heart
That is not despondent,
So that I may worship You
With all my heart,
And without falsehood,
Not grudgingly or sadly,
But gladly and joyfully,
So that I may carry out Your Commandments
With great happiness….

Let us not crave great houses,
And beautiful clothes,
But let us desire from Your mild hand
Only that which we need,
And let us not set ourselves apart
From those who have nothing,
But unite all good people,
So our children show great respect
To all pious people,
Those who fear You
And love You greatly
And keep Your Commandments,
And earn their keep through their own efforts.

And let us benefit from the merit of Abraham, Isaac, and Jacob,
Moses, Aaraon, David, Solomon,
Sarah, Rebecca, Rachel, Leah,
Hannah, Abigail,
And other saintly men and women
And pious men and women.

And may we live to see
The Temple rebuilt,
So we may bring sacrifices,
And again go three times a year
To Jerusalem that Holy City
Which you chose to house
Your Divine Presence,
And celebrate to see
The great friendship and love
That You have for all Your people Israel.

The author of this Tehina is unknown.

Creator of the world, You have made Your world so that man should inhabit it. I am going out now to look for a dwelling in which to settle with my husband and children. Please help me, God, send me to a nice, kosher place where I shall not have to haggle about the rent or fall in among bad neighbors. Our Sages say: “Keep far from a bad neighbor” (Pirkei Avot 1:7) so that he may not corrupt my character; all the more so, from a neighbor corrupted in his faith.... Help me get to know good, God-fearing neighbors and learn good qualities from them. As our Sages say: “What is the good way to which a man should cling? Rabbi Yosi says: a good neighbor (Pirkei Avot 1:13). May we also be found worthy of dwelling in our own land in our own houses, quickly and in our own time. Amen. 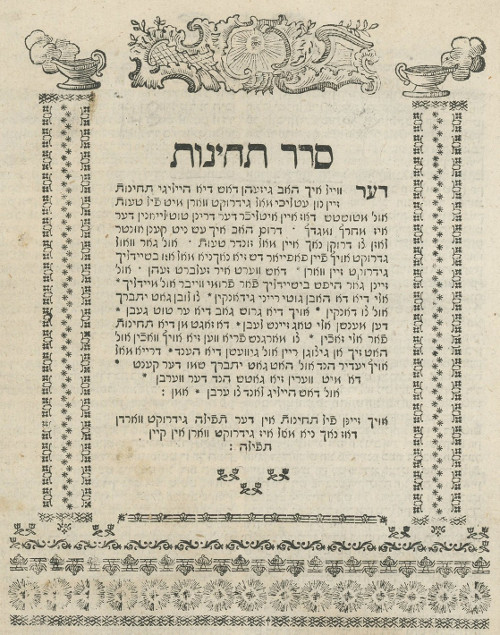 This Tehine was written by a woman using a pen-name Hannah Katz, who lived in Amsterdam in the late 1600s and early 1700s and wrote a volume of Tehinot dedicated “For men and women, young and old”. It is thought that the first name of the author was Baila, because some of the prayers in the book are acrostics, with the Yiddish name Baila spelled out by first letters.

Beloved God, Creator of all souls, I wish to praise You and thank You, for choosing us as Your beloved people. You are our God, Who created Heaven and earth, and gave us the holy Shabbat. Be merciful to us. We observe and honor this beloved, holy Sabbath, with fine meats, and good food to eat that we have prepared, and sweet drinks to rink, and all delights to perform. May our husbands and children be worthy with us, to live long in honor and plenty. On the beloved holy Shabbat, we glimpse Paradise. May we be worthy to be in this world, and in the next. And may the beloved Messiah take us by the right hand and lead us into the Holy Land. Amen.

For hundreds of years, Jewish women have been writing some of the most personal, poetic prayers in our tradition. While the old-world atmosphere and Yiddish language of Tehinot might seem to belong to a different era from our own, the emotions and supplications contained in these prayers can never grow old. They speak to timeless needs of all Jews as we yearn to connect with the Divine.

Books for further reading:
Seyder Tkhines: The Forgotten Book of Common Prayer for Jewish Women. Translated and edited with commentary by Devra Kay (2004).

Voices of the Matriarchs: Listening to the Prayers of Early Modern Jewish Women by Chava Weissler (1998).

A Book of Jewish Women’s Prayers: Translations from the Yiddish, selected and with commentary by norman Tarnor (1995).

The Names of God

Under the Prayer Shawl

40 Days to a Better Self

40 Days for a Stranger
Olivia Newton John’s Grandfather was a Nobel-Prize Winning Jewish Physicist
Don’t Believe in Other Gods Versus God is One
Seeing Without Eyes
Comments
MOST POPULAR IN Spirituality
Our privacy policy
Aish.com Is Looking for Great Writers