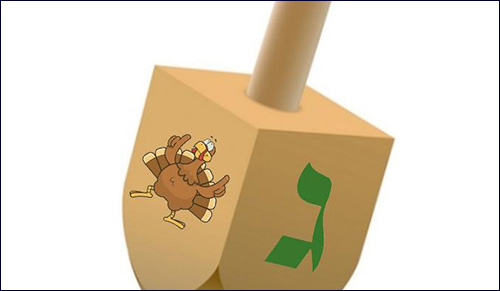 The similarities – and essential differences – between Thanksgiving and Hanukkah.

It will never again happen in our lifetimes – unless you are somehow still alive 70,000 years from now.

This year the first night of Hanukkah will coincide with the American holiday of Thanksgiving. The latkes will share their prominent place at the festive meal with the turkey. Small wonder that some have already humorously decided that this year we ought to call the day by a new name – Thanksgivukkah.

In all seriousness, a “coincidence” of this magnitude requires some reflection. This is a perfect time to give some thought to the essential difference between the motivation for the American day of expressing gratitude to God and the Jewish rationale for our Festival of Lights. Because although thankfulness is the theme behind both of these holidays, they are significantly unlike each other in their emphasis on the particular reason that calls forth our response of appreciation to the Almighty.

As human beings we have two basic needs. One is physical. Because we are flesh and blood we require food to sustain us. Without sustenance we could not live. That is why there is a biblical obligation to bless God at the conclusion of every full meal, defined as one in which we have partaken of bread, the biblical staff of life. “And you shall eat, and you should be satiated, and you shall bless the Lord your God” (Deut. 9:7).

Food satisfies our physical cravings; Torah responds to our deeper need for purpose and meaning.

That is one of only two biblically mandated blessings. The other? The blessing over the study of Torah. Food is essential for our bodies but Torah is at least just as important for the preservation of our souls. Food allows us to live; Torah gives us a reason for living. Food satisfies our physical cravings; Torah responds to our deeper need for purpose and meaning to our existence.

We are a duality going back to the story of the creation of Adam who was formed from the dust of the earth and the breath of the divine. We need our bodies to house our souls; we need our souls to validate our presence in the world.

All other blessings in Jewish tradition come by way of rabbinic obligation. They are post-biblical efforts on the part of the rabbis to ensure greater awareness of God in our daily lives. But the Torah is primarily concerned with human recognition of the two major mainstays of our existence. We need to acknowledge the great gifts that make possible our physical as well as our spiritual survival – our daily bread and our opportunity to peruse the words of God’s Torah.

It is no coincidence then that holidays reflect sensitivity to these two different divine favors that we have found bestowed upon us in special moments of history.

One need not be Jewish to grasp the concept of gratitude as it applies to God’s wondrous role in providing for the needs of our bodies. That indeed was what prompted the pilgrims to proclaim a special day of Thanksgiving. The "First Thanksgiving" was celebrated by the Pilgrims after their first harvest in the New World in 1621. They based it, they wrote, on the biblical holiday of Sukkot, the festival of the harvest. It was a feast that lasted three days, and was attended by about 53 Pilgrims and 90 American Indians. The New England colonists became accustomed to regularly celebrating "thanksgivings”, thanking God for the blessings of the end of a drought as well as of abundant crops and material blessings.

Thanksgiving became a national holiday in the United States by way of proclamation of the 16th President, Abraham Lincoln. In the middle of the American Civil War, President Lincoln, proclaimed a national Thanksgiving Day, to be celebrated on the final Thursday in November 1863. The document, written by Secretary of State William Seward, reads as follows:

The year that is drawing towards its close, has been filled with the blessings of fruitful fields and healthful skies. To these bounties, which are so constantly enjoyed that we are prone to forget the source from which they come, others have been added, which are of so extraordinary a nature, that they cannot fail to penetrate and soften even the heart which is habitually insensible to the ever watchful providence of Almighty God.

To this day, Thanksgiving remains as a powerful reminder of America’s recognition of God’s role in our national prosperity. Our tables overflow with the traditional Thanksgiving dinner, testimony to heavenly blessings bestowed upon us that grant our bodies the sustenance they require. In biblical terms, Thanksgiving is a sequel to the biblically mandated Birkat Ha-mazon, the Grace after Meals in which we express gratitude to the One Above “who feeds the world in his goodness with grace, with kindness and with mercy.”

But Thanksgiving does not address another kind of thankfulness we owe to God. Its emphasis on material blessings requires another component that has its source in the second blessing demanded of us by the Bible. It is the blessing for the spiritual part of our lives. It is the thanks we need to recite before the study of Torah, a blessing that alerts us to the hunger of our souls and our yearning to be nourished by the sacred.

On the Jewish calendar that blessing has a historic source in the story of Hanukkah. To speak of Hanukkah as a military victory of the Maccabees is to totally misunderstand its meaning. There have been many moments in our past when we have survived the threat of physical destruction. They are not Hanukkah. The Jews in the Seleucid Empire did not need to fear physical death. Antiochus was not bothered by the survival of Jews; what he wanted at all costs to prevent was the survival of Judaism. His decrees were against the observance of Torah. Jews could readily find their lives spared if they would be willing to forfeit their faith.

Hanukkah is a holiday whose story is perhaps most relevant to our own days. Its threat was not to our bodies, but our souls. The danger was not death but disappearance by way of assimilation.

How appropriate, the Sages note, that the ritual of Hanukkah emphasizes the use of oil. For eight nights it is the source of the light that fills our homes and our synagogues. Oil has a unique and distinct property. All other liquids, when mixed, lose their individual identity and become unrecognizable. Oil however refuses to mix. Try to stir it with water and it refuses to “assimilate”; it rises to the top and remains distinctive and identifiable.

Jews, like the oil of Hanukkah, will never totally assimilate.

It is the ideal symbol for the Hanukkah story which recounts the miracle of those who championed commitment to the truths of Sinai over the temptations of secularism. The Greeks sought to transform the world to their belief in the holiness of beauty. The Jews saw as their mission the message of the beauty of holiness. Two philosophies were at war with each other. And miraculously, the spiritual ideal proved triumphant.

For those of us today who are frightened by studies which question the possibility of Jewish survival in the face of seemingly rampant assimilation, we need to remind ourselves that the miracle of Hanukkah is our affirmation that we will always persevere in our faith. Hanukkah teaches us that the light of our tradition, which some might say doesn’t even have the capacity to last for one night, will against all physical laws of nature miraculously grow stronger and brighter. And Jews, like the oil of Hanukkah, will never totally assimilate.

Hanukkah then is the historic sequel to the blessing over Torah. It commemorates our religious survival against all odds, the victory of the spiritual over the profane, the sacred over the sacrilegious.

And when Thanksgiving and Hanukkah coincide we find ourselves doubly blessed. We will be able to offer thanks to God on the same day for both our spiritual and material blessings. Let us delight in this extremely rare opportunity to bless God for the food for our bodies as well as the survival of our faith that grants us spiritual sustenance for our souls.

The Chanukah Question
Why Are The Prayers Of Yom Kipur So Repetetive?
Ha'azinu 5783: A Time for Unity!
Twisted Thinking
Comments