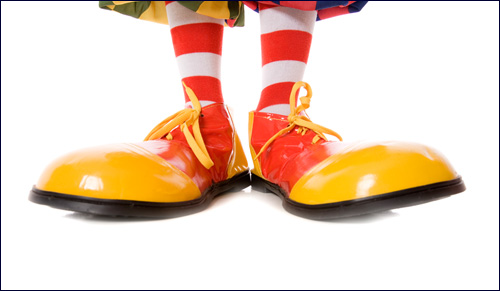 Let’s hear it for those who shield bar mitzvah boys from celebratory candy throwing.

The circus will not be coming to town, at least not the world’s most famous circus. That’s because Ringling Bros. Barnum & Bailey Circus recently folded up its tent, literally and figuratively. No more elephants, no more high-wire acts and, worst of all, no more clowns.

Believe it or not, the Talmud actually has a fondness for clowns. The Talmud (Ta’anit 22a) tells the story of a rabbi who asks Elijah the Prophet, “Is there anyone in this market who has a share in the world to come?” The Prophet says “yes” and points to two men in the market. The rabbi then asks the men what they do for a living. They reply: “We are clowns, when we see people depressed we cheer them up; furthermore when we see two people quarreling we strive hard to make peace between them.”

So clowns deserve our respect. (No, the Talmud does not specifically praise or even mention Jewish humor columnists but maybe you now should think twice before using this article to wrap up your Passover dishes. Catch my drift? Capiche).

If the job of a clown is important, what other jobs in Jewish life bring us joy and should be praised and admired? Are there certain jobs that unfairly and unfortunately are treated like Rodney Dangerfield (“No respect”)?

One job in Judaism that deserves greater praise belongs to those who shield bar mitzvah boys from celebratory candy throwing. Talk about putting yourself in harm’s way. Most agents in the U.S. Secret Service spend less time in the line of fire. Anyone who protects children from sugary shrapnel by bravely offering themselves as a human shield should be praised, especially when the congregation is throwing hard candies.

Another underappreciated job in Judaism pertains to the congregational rabbi’s weekly Shabbat speech. Congregants expect their rabbis to deliver scintillating, riveting and moving lectures, something that can be discussed at the kiddush, lunch, hair salon, golf course, etc. Thus, when it comes to speech-making, rabbis must heed the words sung by red-headed rock legend Bonnie Raitt: “Let’s give them something to talk about.” Of course, a perfect speech is extraordinarily difficult to deliver on a weekly basis. It’s almost as stressful and taxing as the U.S. Postal Service’s pledge to deliver the mail in rain, sleet or snow.

A job in Judaism that sometimes is taken for granted belongs to those who perform the most lopsided Hagbah (Torah lifting) of the year. This epically uneven endeavor occurs right around the holiday of Simchat Torah, when we complete one annual cycle of Torah reading and begin another. At that time, nearly all of the Torah parchment is wrapped around one of the two scrolls, thus creating an extremely lopsided lift. (Based on degree of difficulty alone, it could be an Olympic sport.) If the bulk of the weight happens to be on the lifter’s weaker arm, calamity is possible. So, if you are chosen for this off-kilter honor, you would be wise to stretch out, use your legs and assign at least one designated spotter. No matter what, you’ll have a story to tell and one less squat to do at the gym the next day.

Yet another job in Judaism that deserves extra kudos belongs to the person who sets up a synagogue’s weekly kiddush. It is a thankless job that the hungry masses tend to overlook. While congregants stuff their faces with herring and crackers, they often fail to consider the tireless efforts and supreme dedication of those working behind the scene. Even worse, the ravenous tend to storm into the kiddush like the Bulls of Pamplona, devouring anything that isn’t nailed down and leaving the room in a filthy mess resembling a Jackson Pollock painting. Sadly, too few utter a simple “thank you,” a phrase that is not used often enough. (Other phrases that also are rarely uttered include (i) “Hooray, my in-laws are staying with us for an entire month,” (ii) “I really need to gain a lot more weight,” (iii) “Preparing for Passover is fun,” and (iv) “Wow, the High Holidays are neither late nor early this year.”) So, the next time you partake in a kiddush, try making less of a mess, scene or fool of yourself and try showing more love and respect to the kiddush crew.

Bottom-line: If clowns have a share in the world to come, then one could say that circus clowns go from one “Big Top” to the next.

Shavuot at a Social Distance