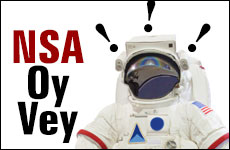 Most embarrassing Jewish phone and email records gathered by the NSA.

As I mentioned in last month’s column, for those of you keeping score at home, former intelligence worker Edward Snowden revealed himself as the source of documents outlining a massive effort by the National Security Agency (NSA) to track cell phone calls and monitor the e-mail and Internet traffic of virtually all Americans. Yes, even you.

The documents have indicated the NSA received secret court approval, under Section 215 of the U.S. Patriot Act, to collect vast amounts of so-called metadata from telecommunications giant Verizon and leading Internet companies, including Microsoft, Apple, Google, Yahoo and Facebook. That’s right, President Obama has no doubt seen that Facebook photo you posted of yourself dancing with the beer cooler at that sorority party.

The NSA is monitoring the communication of virtually all Americans. Yes, even you.

Data gathered includes email, video and voice chat, videos, photos, VoIP chats such as Skype, and file transfers. To paraphrase the great philosopher Bob Dylan – your privacy, my friend, is blowin’ in the wind. The NSA's mission, as set forth in Executive Order 12333, is to collect information that constitutes "foreign intelligence or counterintelligence" while not "acquiring information concerning the domestic activities of United States persons.” These activities, especially the publicly acknowledged domestic telephone tapping and call database programs, have prompted questions about the extent of the NSA's activities and concerns about threats to privacy and the rule of law.

That’s all well and good, but I sense your burning question: “Mark, in all this private information being gathered and examined, surely some of it consists of highly embarrassing Jewish phone, email and internet records. Could you find out and share some of those with us?” Hey, not a problem. They don’t call me the Judaic King of Research for nothing. So, tell you what. Why don’t you go grab a cup of something warm and comforting, dim the lights, and gather ‘round the fireplace here while I regale you with a selection of some of the most embarrassing Jewish phone, email and internet records gathered by the NSA, according to my research.

Agency: “Mr. Dylan, this is Connie at American Collections. I’m calling to find out where your payment is for the new refrigerator you purchased four months ago at United Appliance.”

Dylan: “The answer is blowin’ in the wind.”

Agency: “Yes, it is; your name is clearly on the purchase order. Do you want this to adversely effect your credit rating?”

Agency: “Certainly. How ‘bout we work out some sort of payment plan?”

Dylan: “I’m stuck inside of Mobile with the Memphis Blues again.”
Agency: “May I call you when you return from Mobile?”

Dylan: “I shall be released.”

“Mr. President, first let me say how deeply honored I was that you reached out to me with your suggestion that you and I collaborate on Jewish versions of my most popular movies in order to increase your appeal to the Jewish people. I give you credit, sir, for having taken the initiative of coming up with the actual titles. I think “Raiders of the Lost Knish” was the catchiest, although “Jurassic Pork” was a close second. And I suppose “Jews” practically writes itself as a portrait, as you say, of “the members of a private Catholic beach terrorized by a court order to allow Jews to join.” Indeed, “Close Encounters of the Talmudic Kind” is a whole new way of reimagining that film. Finally, “Saving Private Schwartz” says it all. Still, with all due respect, sir, rather than altering my past work, I’d much prefer working on something original—for which, of course, I would welcome your input at any time. Maybe not this month.”

Honey, I hope you’ll consider what I’m about to say to be more than a chat or a poke. I’m seeing it as more of a status update of our relationship. As you know, I’ve very much enjoyed friending you these past few years, and I’m honored to be one of the fans on your timeline. My activity log has improved greatly since meeting you, so thanks again for not blocking me and for actually liking me. I guess what I’m trying to say, sweetie, is that just tagging you is no longer enough – I really want to follow you forever. Might you be willing to revise your privacy settings? If your comments are positive, I can’t wait to alter our newsfeeds.

[Tune is similar to Bob Marley’s “No Woman, No Cry”]

Oy – Oy – Oy – Oy I remember when we used to nosh
In a kosher deli in Brooklyn,
Oy – observing the pastrami – all verklempt –
Making a bissel broche yeah!

Good lox we have, oy, no shmear we have lost
Along the way, yeah!
In this great tzimmes, you can’t forget your prunes;
So pay the bill, it’s your turn, yeah!

The Wise Men of Chelm and the New Miracle of Hanukkah

How to Visit a Jewish Retirement Home

WouldJew Believe #9: Holiday Edition
The Promise Of The Land
Which Chat Are You On?: Parshas Behar/Lag Ba’Omer
Do You Like Slow-Cooked Food? Thank the Jews
Comments
MOST POPULAR IN Funny Stuff
Our privacy policy