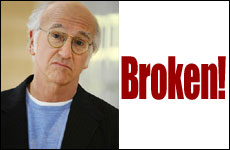 One of the advantages of having been a journalist for a number of years is that I’ve developed a network of contacts and sources that have proven to be a goldmine for story ideas, tips and juicy inside information. Many of these contacts also have close associations with various celebrities of the Judaic persuasion. During the past month, some of these celebrities have revealed their New Year’s Resolutions to my contacts– and the fact that, as often happens, many have already broken them.

What follows is a selective representation of this year’s Jewish celebrity New Year’s Resolutions – some already broken and some ongoing. May we learn from them, empathize with them, be inspired by them – and hopefully not be sued by them.

“If I die, how am I going to turn out a Woody Allen movie every year?”

Just about every year, iconic director/actor/writer/comedian Woody Allen makes a movie and plays clarinet with his New Orleans-style jazz band. This year, he thought he’d break out of that mold and try something totally fresh and unexpected. His New Year’s resolution was to take airplane flying lessons. So, the Woodman bought flying books, flying clothing, and flying lessons. And, then – he got this great idea for a movie about an airplane pilot, which he immediately started writing, fully intending to get back to the flying. But then some tour dates came up with his band and flying got put on the back burner. The more he thought about it, though, the more he convinced himself that he was perhaps not cut out for the flying life. “Am I crazy? A 76 years old Jew piloting a plane through the air isn’t a New Year’s resolution; it’s a death wish. And if I die, how am I going to turn out a Woody Allen movie every year?”

Like clockwork, every few years Barbra Streisand announces a final performance of her career. Tickets are placed on sale for a bazillion dollars, it sells out in about a minute, and the money goes to some deserving charity. Win-win. This year, however, Barbra decided to be honest. Her New Year’s resolution was to state that this upcoming performance would be her absolute last live show ever. After all, she’s 69; why not go out on top? She proceeded to proclaim that this would be her last performance. When her rabbi got wind of this, he paid Barbra a visit and convinced her that stopping her performing would be not only depriving her fans of one of the most perfect voices in the world, but also would be depriving many needy charities – not to mention liberal candidates and causes -- of desperately deserving funding. Barbra’s not unreasonable. She immediately postponed her New Year’s resolution and came up with a compromise – she would no longer bill the show as her final one; but she’d sing as though it was. Happy days are here again!

Although he will be hosting the upcoming Oscars, one of the reasons Billy Crystal had been reluctant to host again is that he’d already done it several times. At this time in his life, he looked for something more substantial, something where he could make more of an impact, create real change for the world. Which is why Crystal’s New Years Resolution was to offer himself as host for the Middle East Peace Talks. He’d even started working on his opening monologue: “Good evening, ladies and Jews. I’m honored to be here tonight hosting this year’s 63rd Annual Middle East Peace Talks – brought to you by Streit’s Matzos. You can disagree about the expansion of Jewish settlements in the West Bank, but everyone can agree about the unleavened goodness of Streits Matzoh. We’re coming to you live from sunny Amman. I remember that name by using it in a sentence: ‘Amman my third falafel today.’ Thank you! Remember to tip your burka-wearing waitresses. I’ll be here all week; or maybe it just seems that way. Topics on tonight’s show -- the possible borders of a Palestinian state, the fate of Jewish settlements on the West Bank, the status of Jerusalem and the fate of Palestinian refugees. Not exactly a laugh riot, but wait ‘til you see it in musical comedy form!” Apparently, Crystal’s psychiatrist has already convinced him to cancel this particular New Year’s Resolution.

Larry David was the co-creator and executive producer of the TV show, “Seinfeld,” as well as the creator and star of HBO’s “Curb Your Enthusiasm.” Both shows could be seen as festivals of complaining -- over things big and small, but mostly small. As the best comedy comes from true personal experience, David is to be commended for turning his daily complaints and anguish into popular entertainment. His New Year’s resolution, however, was to experience just one day of his own life without having to complain even once about anything. This may not seem like anything so special or momentous to most of us, but to David it would be something totally fresh and new. And according to my inside sources, David not only did not have to cancel this resolution, but in fact has already seen it come true. Granted, as it turned out, he was not exactly thrilled with having a day with nothing to complain about – and nearly complained about that. But now that he’s experienced it and knows what it feels like, David is refreshed and ready to return to his more familiar and comfortable life of non-stop complaining. And we are all the richer for it.

Sacha Baron Cohen is best known for creating and portraying three outrageous fictional characters Ali G -- a white wannabe rapper, Borat -- a bigoted man-child television personality from Kazakhstan, and Brüno – an eccentric Austrian fashion show presenter. In his routines, Baron Cohen's characters interact with unsuspecting people who do not realize they are being set up for comic situations and self-revealing ridicule. Although the three roles have brought Cohen much success, he was beginning to feel that he was losing his essential self. His New Years Resolution, then, was to spend a full year as himself – not playing any characters, the better to get back to his own core. The resolution lasted nearly two weeks, when his publicist confirmed that Cohen will be playing Freddie Mercury from the band Queen in a film portraying the band between 1971 and 1985. Whereas the advice most of us invariably get is to be ourselves, in Cohen’s case, it seems better for us all when he takes the advice, “Don’t be yourself.”