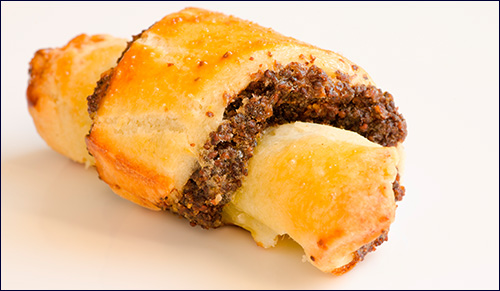 Klinghoffer protestors stopped by Zabar’s for rugelach 8 times in 3 hours.

We do a lot of data analysis at Jewlarious and we have found that we have a tremendous cross-readership with the Danish daily, Jyllands-Posten. Surprisingly, virtually all of our readers (and that includes you!) read both Jewlarious and Jyllands-Posten five times a day. So, you no doubt remember when Jyllands-Posten (just rolls off the tongue!) posted twelve editorial cartoons depicting Mohammed, in order to make the point that all religions should be subject to parody. And, you no doubt remember the reaction, which can be generalized as interminable violence and death threats and an apology from Jyllands-Posten.

Switching gears, New York’s famed Metropolitan Opera, recently began staging a musical entitled “the Death of Klinghoffer,” which many argue is rabidly anti-Semitic. The opera offers a revisionist history of the hijacking of the Achille Lauro cruise ship by Palestinian terrorists, wherein Palestinian terrorists shot and killed wheelchair bound passenger, Leon Kilnghoffer, and threw his body overboard. The opera, according to former New York Mayor and opera aficionado Rudy Guiliani, creates an equivalency between the terrorists and Israel, one which he regards as flagrantly anti-Semitic. We will let you decide about the opera itself (we are pretty sure we know which way you will lean); it is our job to tell you about a few differences between those who protest anti-Muslim sentiment and those who protest anti-Jewish sentiment. So here are...

1. Muslim protestors in Denmark relentlessly rioted for days on end, often eating nothing; Klinghoffer protestors stopped by Zabar’s for Rugelach 8 times in 3 hours.

3. Through violence and intimidation, the cartoon protestors attempted to silence the authors’ free speech; the opera protestors held colorful placards with cute slogans, some of which even rhymed!

4. Klinghoffer’s daughters went to the opera when it was first staged and felt it was offensive and anti-Semitic; thousands of cartoon protestors never saw the cartoons they were violently protesting because newspapers were intimidated into not printing them.

6. Cartoonist Kurt Westergaard lives under constant police surveillance almost a decade later; Klinghoffer composer John Adams enjoys a schvitz and a macchiato, before he gets to work on his next musical, “I cheer for Iran in the World Cup.”

8. Cartoon protestors demanded the author be put to death, the opera protestors wouldn’t feel badly if the composer got a bunion.

9. Cartoon protestors screamed “Death to the infidel!”; Opera protestors chanted, “We only want to stop this opera, but not all operas, because opera is a dying form and we really hope that future generations learn to appreciate opera because it is really beautiful.” (It was a tough chant, but they made it work).

10. Leaders from around the world denounced the cartoons as being culturally insensitive. The Met has arranged a special VIP performance of the Klinghoffer opera for the entire membership of the United Nations.

Passover Food You Need to Buy

Murphosky's Law
For Every Individual, A Torah Scroll
Allegiance To The Monarch
Meet the Real You: Yom Kippur
Comments
MOST POPULAR IN Jewlarious
Our privacy policy
Aish.com Is Looking for Great Writers