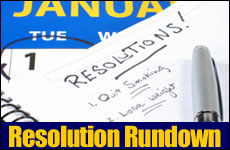 Need some New Year's resolutions? Try these on for size

Research has shown that worldwide, more than 3 billion people make New Year's resolutions, but sadly, only about 16 people actually keep them. Most avowals to eat more fiber, hire a personal trainer and open a savings account get dropped faster than a cell phone call in an elevator. Since these efforts at self-improvement are so tough, maybe we're just aiming too high.

Besides, Jewlarious readers know the truth: the time for sober and sincere New Year's resolutions is right before Rosh Hashanah, when the Almighty is tapping His Omniscient fingers, as it were, waiting for us to get a more meaningful life, or any life at all. January 1st is only the New Year on the Gregorian calendar, something we need to follow until Microsoft learns to program the Hebrew month of Tevet into our computers. (Come on, Bill, what are you waiting for?)

Enjoy what I call my "resolutions light" -- half the seriousness, twice the fun.

Still, we Jews don't need to feel left out when our coworkers are boasting of their own grim New Year's resolutions around the office. In fact, we can help. When they begin to feel dispirited by their failure to keep their paws off the donuts by January 7, we can ease those pangs of guilt by sharing the fact that we've been eating those very donuts since September. Then, over an iced latte, and some more donuts, we can share our own declarations with them, otherwise known as "resolutions light" -- half the seriousness, twice the fun.

Here are some that have worked for me:

More than half of people surveyed claim they plan to spend more time with family and friends as the New Year dawns, yet no one dares touch on that thorny problem of annoying and pesky relatives, like your wheezy uncle Joe who has stiffed you in the birthday present department since you were a kid, or that in-law who can never resist telling you that you appear to have packed on a few pounds. If you are like 99 percent of the world's population with "problem" relatives, vowing to spend less time with them ought to be a snap.

Any nitwit celebrity can spew a long list of benefits of exercise, but it takes a more sophisticated mind to grasp the remarkable perks of a daily snooze. Jogging isn't the only thing that can lower blood pressure, you know. Regular naps have been associated with better mood, more focused thinking, and a fail-safe way to skip out of boring department meetings at 2 p.m. Besides, you can't snack when you nap (trust me, I've tried it) so napping also helps you lose weight. Why not make this the year you stop the charade of joining the gym, and just buy a pillow for the office instead?

That's right. While Weight Watchers meetings throughout the world will be stampeded in January with millions of repentant pudgy-wudgies standing in line to be weighed by a thin person, you will be ahead of the game by not weighing yourself ever! After all, in today's high tech world, it's hard to even find a scale that doesn't also talk to you and give you bad news, such as your body mass index and the Dow Jones Industrial Average. If there's one thing I don't need, it's a talking scale. Do you?

Add Some Guilt to Your Life

Guilt is a highly underrated emotion, something that all Jews understand from birth. The guilt shortage across the planet is even more acute than global warming. Experts predict that by 2025, New York may be submerged under thirty feet of egotism and breathtaking swellheadedness. This is where we Jews can help. Once we convince non-Jews of the benefits of a heavy conscience, they may worry that they are running a little low on this feeling. Then, in the spirit of universal kinship, we offer to share our own, balancing the cultural guilt distribution just a tad. Would it kill you to give up some of that guilt?

Resist the Temptation to Get Organized

January is National Get Organized Month, but if you succumb to this annual lure, you are likely to be visited by a professional organizer wielding threatening weapons, such as color-coded file folders, drawer dividers, and, in severe cases, paper shredders. I once had an organizer clean my desk, but the sight was so unnerving I couldn't think straight. Being disorganized makes you relatable to normal people. I've been told that in some cases (I hope mine is among them) clutter is also a hallmark of genius.

You've got all year to get a handle on your finances. January is the time when that intoxicating word, "Clearance," is dangled suggestively everywhere you shop. Avoiding a good sale isn't only bad money management, it's un-Jewish.

Sure, the lives of most famous celebrities are shallow, silly, and frequently illegal. All the more reason to bone up on their misadventures and be grateful that God didn't make you a celebrity, too.

I don't know about you, but I don't like to travel anywhere that requires shots. It just sounds too dangerous. If you insist on making travel part of your New Year's plans, at least make it somewhere safe, say, for example, the Kern River Valley Turkey Vulture Festival or the Mushroom Festival in Kennett Square, Pennsylvania. After all, it takes no special talent to find thrills in Machu Pichu, but it takes authentic joie de vivre to find excitement studying turkey vultures or at a festival celebrating fungus.

Remember, the key to sticking with any New Year's resolutions is to keep your goals reasonable and to stay motivated. Here's to success in 5768!

Adultalescence
For Every Individual, A Torah Scroll
Allegiance To The Monarch
Meet the Real You: Yom Kippur
Comments
MOST POPULAR IN Jewlarious
Our privacy policy
Aish.com Is Looking for Great Writers