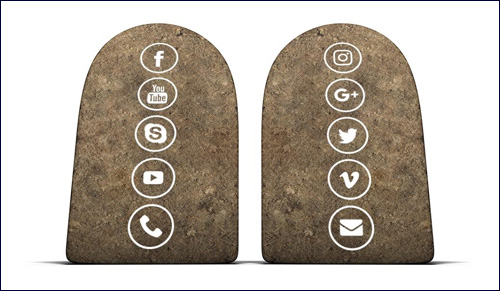 And avoid the pitfalls along the way.

How do we harness the power of social media while avoiding the pitfalls along the way? Here are the Ten Commandments to keep in mind while using social media:

I am the Lord your God: Yes, social media is powerful and it can be positively harnessed to build real and virtual empires that encompass the globe. But remember, God runs the world. You can have a great idea, build an amazing business model, get investors and work really hard, but it’s ultimately up to God if you succeed or fail.

Social media can also abused to wreak havoc, steal and destroy people’s lives and careers, and it appears to provide the anonymity that enables this activity. But remember that God sees and hears everything we do and all our actions are being documented for future judgment.

Don’t have other gods: The Talmud compares anger to idolatry because when we get angry we have not fully internalized the belief everything in the world, the bad as well as the good, emanates from God since God is One. Social media exposes us to many different situations and opinions, some of which we agree with and some that we simply can’t fathom. Don’t blow your top and later regret what you said. Instead try to understand what you should learn from this contrary viewpoint and cogently express your opinion.

Don’t take the name of God in vain: The Torah requires us to be extremely careful with our speech, even uttering God’s name must be done with the utmost care. The power of speech is uniquely human and enables us to connect the physical and spiritual worlds. People use profanity because they think it’s cool and emphasizes a point, but it just dumbs down the message and the person. Use refine language when expressing yourself.

Remember the Sabbath: On Shabbat we commemorate God’s creation of the world by ceasing from all creative work, including electronic activity. Being constantly bombarded by emails, phone calls, pings and other distractions, Shabbat enables us to take the time to connect with our inner selves, our families and God, and refocus our energies on what is most important in life.

Honor your father and mother: Social media tools can be excellent tools for the elderly and the homebound to keep in touch with friends and family and to speed up painfully slow bureaucratic hurdles. But elderly people often don’t know how to use them and are scared to even try. Many would love to video chat with their children or grandchildren, but just can’t. Take the initiative and ask an elderly person if you can help them to video chat with their loved ones or if they need help solving issues online. You can be extremely helpful in just a few minutes of your time.

Don’t murder: The sages said “Whoever embarrasses his friend in public, it is as if he spilled his blood.” Everything that we do on social media is public. When we were kids, we learned how to avoid bullies in the hallway. Today’s cyberbullies create a 24/7 bullying experience that overwhelms young people, even causing some young people to escape the pain by taking their own lives. Don’t take any part in this type of behavior and put a stop it by calling out the bullies or by reporting it to others.

Don’t steal: Social media is fueled by shared content, most of which is freely available. It’s an ecosystem of kindness where people share ideas, experiences and knowledge for the benefit of others. However, this openness can lead to plagiarism or theft of other people’s ideas, data and possessions. Don’t take what does not belong to you and if you elaborate on an idea, give credit to the author.

Don’t bear false witness: Check out the facts. If you can’t get all the facts before posting, then wait till you have the facts. It’s better not to post than to make false accusations.

Don’t covet: Studies have shown that people who aren’t on social media are happier than those on it. Part of this is attributed to jealousy caused by seeing our friends’ vacations, parties, new jobs and all their exciting times. Keep in mind that social media presents a very select, manicured version of someone’s life.

Rabbi Carmi Wisemon is the director of Sviva Israel and an Israeli high-tech professional.

Burning Questions
It Takes A Lot Of Faith To Be An Atheist
How Instagram Brought Back This Nostalgic Soup
What Makes Eli Run?
Comments
MOST POPULAR IN Current Issues
Our privacy policy