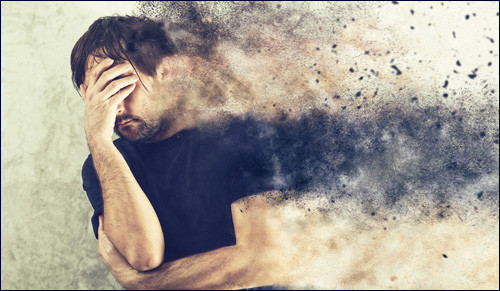 One in 25 Americans live with a serious mental illness, 9 times more than people who have cancer.

Why has the stigma of mental illness not kept pace with cancer, Downs Syndrome, special education, sexual abuse, addiction?

My friend Ezra Birnbaum recounts a powerful lesson by Rabbi Jonathan Sacks. Making a mark on a piece of paper Rabbi Sacks asks an audience to shout out what they see. As if in unison all say they see a black dot.

Rabbi Sacks challenges his audience asking why do you only see a black dot in the middle of this sheet of paper which takes up a mere space on an otherwise white sheet. Why did you all not say you see white space which takes up 95% of the paper?

This story can teach many lessons.

At face value it can be the proverbial cup half full half empty question, an opportunity or a challenge? Make of it what you will.

The broad Jewish community is well educated, even reflexively conditioned to affirm the rights and privileges of many diseases and behaviors. We have embraced the stigma of cancer in one generation.

So too with Downs Syndrome. We have shabatonim dedicated to risk behaviors such as addiction, Rosh Yeshivas address gatherings on prevention and response to sexual abuse and many synagogues prohibit serving alcohol at their functions. All this commonly and openly discussed before audiences of hundreds and thousands.

The carpet has been lifted. Communal words of shame are not as readily spoken. Seeking the best course of treatment, a Rebbe’s blessing, inclusion in community is now the norm on these issues. As they should be.

Not yet so with mental illness the very ailment that has historically been a part of our community centuries prior to the coming out of these other issues. Long before the correlation between addiction and victimization of sexual abuse of teens in the Jewish community was identified there existed mental illness.

Decades prior to the emergence of special education, inclusion programs and celebratory bar mitzvahs of children with Downs Syndrome, psychotropic medications were available to effectively treat depression, bi polar disorder, schizophrenia and other forms of mental illness.

Our community no longer lulls itself into believing that societal problems in the general population do not permeate our own. We have too long hidden behind a facade that whatever takes place ‘over there’ occurs in much smaller, even infinitesimal percentages amongst our people.

One in 25 Americans live with a serious mental illness. Almost nine times as many people suffer from mental illness as those who have cancer.

So too, mental illness is a disease.

The sheer number of people openly seeking treatment for cancer, drug addiction, has greatly contributed to our collective awareness, understanding and response to these diseases. Though treated with different medication regimens and support groups, each require family and community circles of support to truly achieve success.

Mental illness, in fact, affects a far larger percentage of our population than does cancer, addiction, Downs Syndrome.

Cancer affects one in every 218 people in the US.

Now replace cancer with the words mental illness on that same piece of paper.

One in 25 Americans live with a serious mental illness. Almost nine times as many people suffer from mental illness as those who have cancer. Sixteen million people in the US (7%) suffer from depression. Forty two million (16%) live with an anxiety disorder. That’s a combined 58 million Americans and this doesn’t include other major types of mental illness such as bi polar disorder, schizophrenia.

The majority of such people suffer in silence through their anxiety disorders, their bouts with depression or bi polar disorder.  These individuals can succeed in college, in yeshiva or seminary, in their marriage, and in every profession and work environment.

We know people with mental illness as our neighbors, coworkers, and relatives.

We don’t hesitate to visit a neighbor suffering from cancer. Do we do the same with a person with mental illness whose spirits can be immensely lifted with a conversation that treats him not with sympathy or kindness but as a typical normal person who is having a setback?

People with severe and persistent mental illness often seek out OHEL for services including crisis short term housing, day programs, job preparation or permanent supportive housing. Yet they are a relatively small percentage. The majority of adolescents and adults with mental illness live at home, attend school and work in our many diverse communities.

The carpet on mental illness does not need replacement. It needs to be lifted and discarded.

Rabbi Sacks’ sheet of paper does have a black dot in the center. But then again, what doesn’t?

The Princess: Sukkot
How Oswego, NY Became a Haven for America’s Jewish Refugees during World War II
Helping Jews after Hurricane Ian’s Devastation
Kosher Dillin': The Jewish history of Pickles
Judaism and Human Creativity
Jews and Beer: 8 Surprising Facts
After 500 Years, Closing the Circle
Patriotic Jews and the American Civil War
Why Are The Prayers Of Yom Kipur So Repetetive?
Ha'azinu 5783: A Time for Unity!
1 2 3 … 2,915 Next »