Based on his own life experiences, Rabbi Yom Tov Glaser knows that Judaism can speak to today’s disaffected youth.

The future of Jewish spirituality is at a crossroads. For today’s youth, the traditional touch-points – Israel, High Holiday services, the Holocaust and chicken soup – are often non-starters. Lack of a proper Jewish education, coupled with the swamping distractions of the Internet, has left many Jewish youth disaffected and detached.

So what’s a rabbi to do?

Meet Yom Tov Glaser: accomplished surfer, mountain biker, guitarist – and spiritual mentor. Rabbi Glaser has achieved stunning success in turning young people onto Judaism through his unique formula of self-discovery, Gen-Z lingo, and a persona that fuses chassidic garb with surfing. Most of all, Yom Tov demonstrates how the staples of Jewish life – Shabbos, kashrut, prayer – form the foundations of personal fulfillment and ultimate pleasure.

A typical evening with Rabbi Glaser imparts Jewish wisdom through the mixed medium of storytelling, Kabbalah and Bob Marley songs. As the crowd gets up to dance, Yom Tov skateboards around the room, guitar in hand, in a genuine outpouring of joy that conveys an (unfortunately) rare positive Jewish message.

Aish.com caught up with Rabbi Glaser in between his flurry of appointments, lectures and one-on-one rap sessions at the Aish Center in Jerusalem.

Aish.com: Tell us about your own journey.

Yom Tov Glaser: I grew up in Brentwood, West Los Angeles, amongst the world’s wealthiest people. John Densmore, the drummer of The Doors, lived next door. On the other side was Mel Brooks’ writing partner. Behind us was Dustin Hoffman, who later bought our house. But none of that impressed me. Ever since I was a young kid, I always wanted to know the reality – the capital-R Reality behind everything.

Why am I here? The question got louder and louder.

I remember at age 11, one night my older brother Sam took me to the top of Mulholland Drive. We parked the car and lay out under the stars. Sam had learned some physics and was explaining to me the vastness of the universe, and the relative insignificance of the earth. When I hit my pillow that night, I thought to myself, I’m on a flying speck of dust. Why am I here?

From there, the question only got louder and louder.

Aish.com: Where did you seek answers?

Yom Tov Glaser: It was obvious to me that school was not interested in dealing with that kind of question. So I went to the local rabbi and asked: Why did God create the world? What is our purpose in life? At the time I was into the band Kansas and I brought him the lyrics of their song, “The Wall”:

The path that I have chosen now has led me to a wall...
And those are few who've seen it through to glimpse the other side...
The promised land is waiting like a maiden that is soon to be a bride...
And though it's always been with me, I must tear down the Wall and let it be...

It’s a song about life’s journey, the search, and overcoming challenges. But this rabbi looked at me like I had dropped off another planet. He didn’t know what any of this had to do with collecting membership dues and training Bar Mitzvah kids. So I got the message that there’s nothing in Judaism for me. 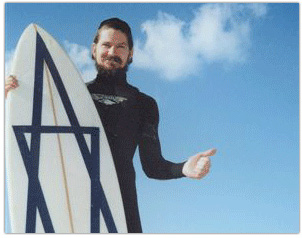 Aish.com: If you weren’t getting answers from the traditional sources, what route did you take?

Yom Tov Glaser: I journeyed within myself. At age 11, I dropped out of formal education and traveled around LA on a skateboard. My parents were very understanding and patient – they realized that I was a good, caring, respectful kid who just needed to air out.

So I took to the streets in search of something beyond my own experience. This became an obsession. For hours and hours a day I was surfing, mountain-biking and skateboarding down steep hills, always looking for a bigger rush. It was a way of distracting myself from the palpable lack of meaning in my life. At night I would play guitar. I had no curfew.

Aish.com: How long did this go on for?

Yom Tov Glaser: Till age 18. Then my father bribed me to go to college. The grand prize was an unlimited trip around the world. It was an offer I couldn’t refuse. And it was a miracle that I got into university because I had no prerequisites and no high school GPA.

Aish.com: How did you fit into the university environment?

Yom Tov Glaser: On one hand it was tough because I’m a very experiential person. But I made the decision that as long as I’m there, I might as well absorb all I can. I took courses like the philosophy of science and the history of thought. On the side, I studied geology and the effects of global warming on surfing spots.

Aish.com: What are some of the ideas that influenced you in college?

Yom Tov Glaser: I spent a lot of time learning deconstructionist philosophy, which basically says: Meaning is arbitrary. “Who cares what this author or artist had in mind; I can extract whatever I want.” We would do exercises where we’d imagine a particular perspective – for example, we’d do a feminist reading of Frankenstein.

My take-away from all this was that the world is inherently meaningless. I had been searching for deeper meaning since age 11 and now I was devastated. I didn’t know where to turn anymore. So after graduation I went on my world tour carrying only my guitar. I spent a lot of time in Europe, drifting along, clinging to a mantra of love, but always looking for the secrets of life. What kept me going was the unexpected discovery that the coasts of France, Spain and Portugal have some of the best surfing spots on planet Earth.

Aish.com: How did you end up in Israel?

Yom Tov Glaser: Something incredible happened. My father’s business went bankrupt and he could no longer afford to support my world travels. So my brother Sam arranged for me to go to Aish in Jerusalem. I showed up at the yeshiva with long curls, an airbrushed tank top, a large amethyst hanging from a necklace, and a guitar on my back. I had a backlog of 12 years of questions. And suddenly I was getting very thorough answers. This produced a slew of follow-up questions. Finally someone was speaking my language. I was so excited I could hardly sleep at night. 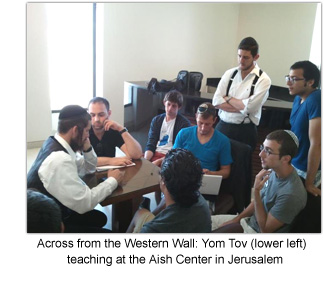 Aish.com: You’re now teaching and sharing your experience and insights with others. With your long peyos (sidelocks), do you sometimes find it difficult to get your message heard?

Yom Tov Glaser: There’s a misconception that Judaism will take away the things you love. I try to be an example to break that misconception. The fact that I look this religious and am still having loads of fun, shows people that they can, too. But it only works if you keep within the system. As I always say: “If you’ve got the munchies, don’t forget to check if it’s kosher.”

Aish.com: You still enjoy extreme sports. How does that fit in with Judaism?

Yom Tov Glaser: The whole point of any spiritual system is to get close to God. That’s why I love mountain-biking. In the city, everything has man’s fingerprints; in nature, it’s God’s fingerprints. Maimonides says that tapping into the beauty of creation is one key way of connecting with God. So when I’m riding I’ll often pull off to the side and speak to God. This is especially helpful in Jerusalem where the trails are so treacherous!

Aish.com: When you have the opportunity to influence young Jews, what’s your goal?

We all have many mini-tests throughout the day. Many times we find ourselves struggling between what we intellectually know is right, versus what feels good at the moment. When we make the wrong choice we feel really lousy. When we choose the right thing we always feel good.

Aish.com: What is holding people back from making these deeper choices?

Yom Tov Glaser: I host a week-long experience in Jerusalem called the Possible You Seminar. It answers one key question: Who are you? Meaning, from where do you generate as a human being? In the thousands of people I’ve met, most are generating from negative, limiting statements – “I am unworthy, unlovable, unintelligent.” If that’s where you generate from, then when faced with the choice between two opposing forces, you’ll lack the confidence in your own intuition. That’s when regretful choices are made.

Aish.com: So what’s the solution?

Yom Tov Glaser: I get people to focus: Is your self-perception really true? And if not, what can you create as a victory over that – to formulate a new, more accurate self-truth? My goal is to get people away from the need for “acceptance” as the driving force of their decision-making. If someone can wean themselves from being dependent on outside approval, then life’s decisions can be made from a position of independence and strength. Once you get to the point of being self-generating, you are true to yourself. You have achieved self-esteem. And that's when life really starts.