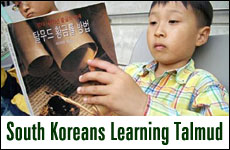 Why South Koreans are in love with Judaism.

A child in Seoul studies a Jewish text

The South Korean ambassador to Israel, Ma Young-sam, raised eyebrows recently when he told reporters the Talmud was mandatory reading for Korean schoolchildren.

South Korea is a country with a deep Buddhist history, but one which has embraced with vigour the Christianity brought to its shores by missionaries in the late 1800s. Official statistics say some 30 per cent of South Koreans are church-going. In such a country, Jews are few and far between.

Yet, pop down to the local corner shop and along with a pot of instant rice or dried noodles, you can buy a copy of Stories from the Talmud. It is not rare, either, to come across book-vending machines stocked with classic works of Babylonian Judaism.

The Talmud is a bestseller in South Korea and is on the curriculum for primary school children.

The Talmud is a bestseller in South Korea - even the government insists it is good for you, and has included it on the curriculum for primary school children.

Lee Chang-ro heads a literature research team at the Ministry for Education. He says: "The reasons why Korean children are taught Talmud are pretty obvious. Koreans and Jews both have a long history of oppression and surviving adversity with nothing but their own ingenuity to thank. There are no natural resources to speak of in Korea, so, like the Jews, all we can develop is our minds."

The fascination with Judaism does not end there. Media outlets regularly run newspapers columns on "Jewish education", weekly radio features, and television documentaries, all of them showing Jews in a glowing light.

The Talmud on display in a Korean bookshop

Although average Koreans can boast that their bookshelves hold at least one or two copies of the Talmud, to think of Korea as a hotbed of latent Judaism would be wrong. The motivation is less to do with religion and more to do with aspiration. Korean parents value schooling above all else. Parents send their children to after-school crammers until midnight and will spend their last penny on tutors and extra lessons. And, shy of good role models on the quest to securing academic success for their offspring, mothers almost unerringly turn to the Jews for inspiration.

Mother-of-two Lee San-sook explains that the way that Jewish children are brought up is universally viewed as positive in Korea.

"The stereotype of Jews here is that they are ultra-intelligent people. Jews have come out of nowhere to become business chiefs, media bosses, Nobel Prize winners - we want our children to do the same. If that means studying Talmud, Torah, whatever, so be it," she says.

Nonetheless, for a small number of Koreans, this love of Jewishness does translate into religious observance, even though, with no synagogues and no access to kosher food, they encounter almost insurmountable problems in leading a Jewish life.

One wannabe Jew, 38-year-old Park Yo-han, has handed in his notice at an investment bank to take the plunge into Judaism. He says he will go to New York, where he knows nobody, has no job prospects, just to follow his dream of Orthodox conversion.

"I've tried just about everything. Converting in Korea isn't difficult - it's impossible," he says.

Jewish observance in Seoul is almost entirely centred on Friday night services in the back of a Christian chapel on a US Army base. Every week, the tiny congregation of ex-pats and locals flip pews containing hymns books and New Testaments to face a pokey little ark for prayers. At the end of the night, everything gets put back in place for Friday night Mass. If there was not a small Ner Tamid hanging above the ark, you really would mistake it for a cupboard.

Most of the regular and long-serving members of the congregation are non-Jewish Koreans - civil servants, doctors and a politician from the ruling party, who is currently squeezing in his attendance between bouts of campaigning for local elections. They have no wish to convert but they take their interest in Judaism seriously. Most boast impressive collections of Judaica and read Hebrew fluently.

Among their number is a living legend of Korean Jewry, Abraham Cha. One of the few Koreans who have actually converted, he is a regular fixture at the US Army base services.

An old man now, he still cuts a memorable figure. He has a wild beard, payot, tzitzit protruding proudly, and maintains an unrivalled personal library of Jewish books from around the world, which he has painstakingly collected.

Cha says he had to give up everything to become an observant Jew in Korea.

Anti-Jewish feeling is almost unthinkable in this part of the world.

"My family don't speak to me any more, I had to divorce my wife. I even had to stop working because they wouldn't give me the day off on Shabbat or on Jewish holidays. My bosses couldn't conceive what it meant to be Jewish."

Although precisely what it involves to be a Jew eludes most Koreans, anti-Jewish feeling is almost unthinkable in this part of the world.

Says Seoul resident Naomi Zaslow, "If you refuse a plate of pork ribs here, people will be dumbfounded. If you tell them it's because you're Jewish, they'll unfailingly look impressed and say: 'Oh, you must be very clever'."

This article originally appeared in the Jewish Chronicle

Kaifeng's Jews
Should I Break Up, Get Engaged or Keep Dating?
Time Is Your Precious Commodity
A Constant World in Flux
Comments
MOST POPULAR IN Israel
Our privacy policy