Should We Ditch Small Talk on Dates? 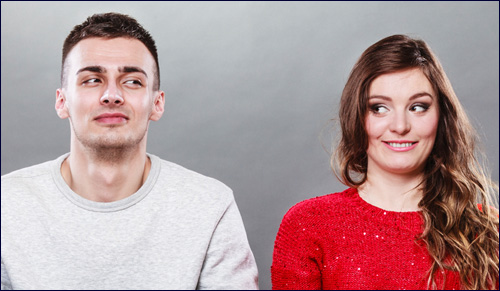 Why serious conversations can help speed up the dating process.

When I was single, I dreaded Valentine’s Day. Yeah, I knew it was a totally made-up holiday, a sort of extortion for men to ante up with jewelry, chocolates, and cards – or else. But if you were relationship-less on February 14, it was hard not to feel left out of all the giddy romance seemingly swirling around you.

When I met my husband, I saw almost immediately that he could be that special man who would never let me feel lonely on Valentine’s Day, or any day, again. We talked easily about so many things, and had a similar sense of humor. Yet after only a few weeks of dating, when I thought everything was going well, he started making me jittery by tossing out the Big Religious Questions of Life: How often did I think about God? Did I consider whether the Torah was true? Did I think that Jewish law should change according to the times, or did I think it made sense to design my life to align with traditional Jewish values, even if it would put me a bit out of step with the prevailing culture?

No one had ever asked me questions like this, let alone on a date, and I was way out of my comfort zone.

No one had ever asked me questions like this, let alone on a date, and I was way out of my comfort zone. I thought I was intelligent (hey, I had a degree from U.C. Berkeley!). In fact, I was a bit of an intellectual snob, no doubt overestimating my own cerebral capabilities. Jeff’s first exploration of traditional Jewish philosophy at Aish HaTorah in Jerusalem only a few months before we met had sparked his desire to meet the challenge that Rav Noah Weinberg, ob”m, had presented to him: What are you living for? Figure it out!

I had only dated Jews and considered myself “very Jewish,” but was more comfortable talking about politics, movies, even the latest antics of celebrities in the news. But God? Torah? How I planned to integrate mitzvot into my life? I thought only rabbis talked about that.

I realized instantly that my lack of curiosity about these Big Questions didn’t reflect well on me. And I had no intention of bailing and telling Jeff, “Nice knowing you, but we don’t seem to be on the same page here,” even if it meant another upcoming Valentine’s Day watching a movie alone and eating too much Ben & Jerry’s. In fact, I really did want Jewish values to inform my life. Jeff’s questions startled me into realizing I needed to give them more focus.

I was reminded of all this when I read the recent “Modern Love” column in the New York Times. The author, Tim Boomer, was still recovering from a break up of a five-year relationship when he overheard a mundane conversation in a bar between another couple about the weather and commutes to work. Boomer decided that when he began dating again, he would have no patience for small talk. “If being single meant having to partake in this kind of conversation, I’d rather pass,” he wrote. “How could I go from the deep connection I had with Alejandra to discussing bus schedules and weather patterns?”

His experiment worked. Instead of asking a woman what countries she had traveled to, which can lead to reciting a boastful list, he asked, “What place most inspired you and why?” Adapting typical first date questions, even when they sounded like college essay questions, led him more directly into conversations of consequence, leapfrogging past basic facts and exploring deeper thoughts and feelings. He even used it to good effect on a business trip with a colleague: instead of asking the colleague how long he had been married, he asked him what had made him fall in love with his wife in the first place.

Jeff and I grew up more or less secular, so these Big Questions were new to both of us. While we had great personal chemistry, we also needed to learn whether we had a shared spiritual vision for the future. Our children have taken this more “interview-style” dating to the next level. Having grown up in observant homes, “fun” during dating was a secondary goal to finding out as quickly as possible: Do I want to marry this person? In their circles, it is expected to get past idle chit chat quickly and talk about such issues as their levels of observance, how much involvement they want to have with the secular world, and of course, goals and roles they foresee in their professions, in their marriages and as parents.

I have counseled my kids during dating not to simply go by a script, asking a predetermined list of questions. And small talk is absolutely fine and natural as a way to ease into a conversation. One of my sons was given very wise advice from one of his teachers, which was that on dates it is his job to make the young lady feel as comfortable as possible. This requires sensitivity, awareness, an ability to observe and intuit. In other words, it requires emotional intelligence.

Jewish dating does tend to fast-track the conversation into the Big Topics, it’s true. It’s not to avoid romance altogether; it’s actually a way to speed up the point where romance is possible. We don’t want to wait one or two or five years into a relationship to discover we don’t share the same religious values. We want to keep the dating train moving without too many lurches or sudden stops, get to the chuppah and start building a life of deepening love and beautiful conversations.

3 Ways to Change Your First-Date Experience

3 Ways to Prepare for Your Bashert

How to Keep a First Date from Being the Last

The Dating Guy: My Last Blind Date (1 of 3)
Don’t Believe in Other Gods Versus God is One
Seeing Without Eyes
Why Shouldn’t We Eat Whatever We Want?
Comments
MOST POPULAR IN Dating
Our privacy policy
Aish.com Is Looking for Great Writers