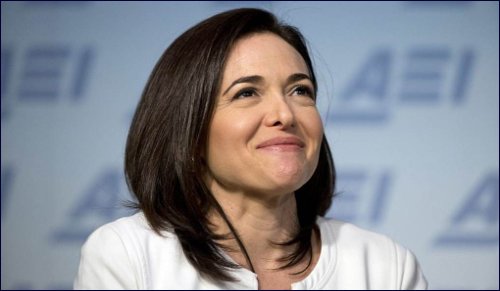 The Facebook COO’s new book on facing adversity and finding joy is full of insight and wisdom.

Sheryl Sandberg’s new book Option B: Facing Adversity, Building Resilience and Finding Joy (co-written with Adam Grant) is a truly beautiful work. I laughed and cried, smiled and grimaced; my emotions ran the whole gamut, as they do in life itself. Sheryl Sandberg is the COO of Facebook. She is famous not just due to her prominent position but for her earlier book, Lean In which was written to encourage other women in the business world.

Her new book is far more personal. Dave Goldberg, the CEO of Survey Monkey and her beloved husband of 11 years, died suddenly when they were away in Mexico to celebrate a friend’s birthday. It was left to Ms. Sandberg to go home and break the news to her children and then confront the rest of her life without him.

As she faces this new and painful journey, she invites us all to join her. Throughout the book, Sheryl Sandberg makes herself vulnerable and puts her raw emotional state on display (to the point of revealing that for the first month her mother would lie next to her in bed at night holding her until she fell asleep), thereby creating a point of real human connection with her readers, as she has done with her Facebook followers.

This is no easy task in our oversaturated age and I commend her for it. There are so many ideas in the book (I think it is a well I will drink from repeatedly) that it is hard to know what to focus on but, as she did herself, I think I will direct my attention to the “elephant in the room”.

Avoiding discussion about death actually increases the suffering of the mourner.

We are uncomfortable with death, so we try to avoid the subject. This frequently results in a bizarre cocktail party-like atmosphere at a shiva house where we debate the flaws of our favorite sports teams and discuss the merits of the latest movie.

This mistake, this avoidance, Sandberg points out, actually increases the suffering of the mourner. Their loved one has seemingly become invisible and there is no one who wishes to discuss him or her.

This is the opposite of how Judaism looks at shiva, at mourning. Traditionally it is the mourner, not the visitors, who sets the tone and leads the conversation. In fact, we are not even supposed to speak before the mourner does. I have yet to hear a mourner under these circumstances speak of the weather, the Dodgers, or their latest vacation. The death of her loved one is all she’s thinking about, all she wants to talk about. It’s not kind and considerate to speak of different topics; it’s actually thoughtless and cruel.

Apparently psychologists have coined a term for avoiding uncomfortable topics – the “mum effect”. As Ms. Sandberg unfortunately discovered, it can be very lonely and isolating.

The end result is often that mourners only connect to other mourners, those who know and understand their pain. This should motivate most of us to ask ourselves what kind of friends we want to be. Do I want to be a safe place where my friends in pain can allow themselves to be open and vulnerable or do I want to keep the conversation light and superficial, thereby ensuring that the friendship will stay that way also?

Ms. Sandberg also takes us with her as she moves from grief to joy. It’s not that you ever leave the grief behind but that you can additionally find moments of laughter – and eventually not feel guilty about them. You never “recover”.

“He would want you to be happy – even now. Don’t take that away from him.”

Her ability to move forward was assisted by her late husband’s brother. “Since the day Dave met you, all he ever wanted was to make you happy,” he shared with her. “He would want you to be happy – even now. Don’t take that away from him.” 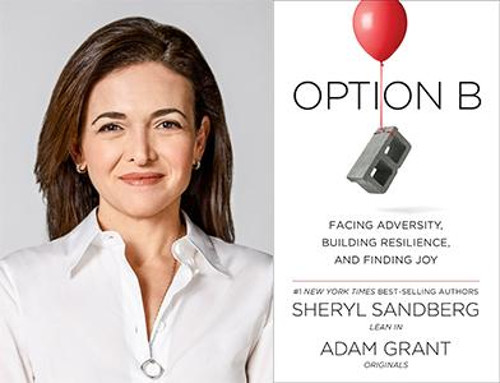 These words were a gift along with the recognition that her mood was affecting her children. The kids told Sandberg’s sister-in-law that they were feeling better because “Mommy stopped crying all the time.”

It is a truism that cannot be repeated too often: when I give to others, the biggest beneficiary is myself. There is no better tool for moving out of self-obsession, self-centeredness, jealousy, guilt – and yes, even grief. In addition, Sandberg made a New Year’s resolution in 2016. At the end of each day she would write down three moments of joy. She describes how this changed the focus of her day. Instead of looking for what’s not working, instead of concentrating on the negative, she was searching for those positive moments. After all she needed something to write in her journal that evening.

It doesn’t have to be the big things; look for small everyday experiences.

There are so many ideas in the book and I will mention just one more. Sandberg writes, “It is the irony of all ironies to experience tragedy and come out of it feeling more grateful. Since I lost Dave, I have at my fingertips this unbelievable reservoir of sadness… But alongside that sadness, I have a much deeper appreciation for what I used to take for granted: family, friends, and simply being alive.” Ms. Sandberg is talking about post-traumatic growth.

While saying to someone in the midst of their pain that this is an opportunity for growth would be the height of insensitivity, an opportunity does lurk. It takes time (elusive and different for everyone) but many people emerge kinder, more compassionate, more appreciative and in other ways changed for the better from their experience of grief. No one wants to be told that (so don’t!) and if you do they won’t be able to hear it or believe it, but if they are open and receptive, it frequently happens – as it did for Sheryl Sandberg.

My Costco Angel
What Makes Eli Run?
The Tyranny of Materialism
Science Enters the Mysterious Inner World of Consciousness
Comments
MOST POPULAR IN Current Issues
Our privacy policy