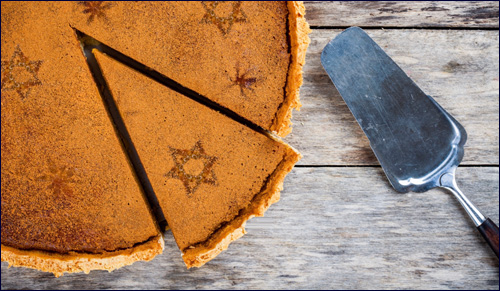 Giving thanks goes to the essence of what it means to be a Jew.

Was it President Lincoln in 1863, President Washington in 1789, or the Pilgrims themselves in 1622? While historians may debate when the holiday of Thanksgiving was first instituted, the practice of giving thanks began much earlier.

Leah names her fourth son Yehudah from the Hebrew root hoda’ah, which means thanks, out of gratitude to God. According to the Talmud (Berachos 7b) Leah was the first person in history to say “thank you” to God.

How could that be? Didn’t Adam, upon being exiled from the Garden of Eden and learning about second chances, say “it is good to thank the Almighty”? Did Noah not express his gratitude to the Master of the Universe? Did Eliezer not communicate appreciation for divine assistance in fulfilling his mission of finding a wife for Yitzchak? The list could go on. How could the Talmud make such a bold assertion when it seems from the Torah itself not to be true?

Rav Shmuel Binyamin Sofer offers a beautiful suggestion. Yes, there were individuals prior to Leah who had expressed gratitude. However, their gratitude was always in response to a supernatural phenomenon, to the revealed hand of God in their life. Leah, in contrast, was the first to say thank you for something which others considered completely natural. Her thank you wasn’t the result of being miraculously saved or being given a second chance. Leah expressed deep gratitude to God for the natural, biological experience of having a baby. Her thank you was an implicit acknowledgment that even that which appears natural, regular or ordinary is also the result of the extraordinary hand of the Divine.

And as our brothers and sisters in Israel have tragically learned too often of late, if when you go to sleep at night, everyone in your family and in your home is as healthy and well as they were when you and they woke up, you should give tremendous thanks.

Rav Yeruchem Levovitz offers another answer to our question. He explains that most people say thank you in order to pay off their debt of gratitude. Someone does something nice for us and in a quid pro quo, we say thank you to them to settle the score. Indeed, in each of the incidents that preceded Leah saying thank you, the speaker offered a one-time expression of appreciation and moved on.

As a nation Jews are to be characterized by an ever-present sense of gratitude.

Leah did something categorically different. She named her son Yehudah. She named him, “I am grateful.” Every time she called out his name – “Yehudah come for supper, Yehudah did you do your homework, Yehudah – what time will you be home tonight,” she reawakened her sense of appreciation. Unlike the others who said thank you and paid off their debt of gratitude, Leah formulated a feeling of thanks that was sustained, perpetual, and that was felt each and every day on a consistent basis.

Rav Yeruchem explains that this is what Leah meant when she gave him his name. “Should I only thank God this one time and move on?” No! I will continue to thank him over and over again.

The United States may officially celebrate Thanksgiving one day a year, but to be a Jew, to be the progeny of our Matriarch Leah, is to be overflowing with thanks each and every day. This is why Jews are called Yehudim after Yehudah, because as a nation Jews are to be characterized by an ever-present sense of gratitude.

Let us live up to our name as Yehudim, and rather than be consumed by only worry and concern, feel deep and profound gratitude for all of the blessings in our lives, particularly those that we too often take for granted and fail to appreciate.

Pain, Horror and Fear in Minneapolis

Made In the Image of God

The Robot Within
Should I Break Up, Get Engaged or Keep Dating?
Time Is Your Precious Commodity
A Constant World in Flux
Comments
MOST POPULAR IN Current Issues
Our privacy policy