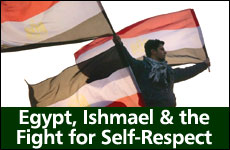 Solving the Palestinian-Israel conflict isn't the lynch pin. Dignity is.

A lot has happened in the Middle East and where it is ultimately heading nobody knows. But one thing is for sure – it is now clear that Israel never really was the problem for the frustration on the "Arab street." Numerous so-called experts and politicians have repeated the mantra that if the Palestinian-Israel problem would be solved, then that would be the lynch pin in resolving all the problems in the region. What complete nonsense.

The people who have turned out in the tens of thousands in Egypt, Yemen, Jordan, Tunisia and other countries are not there to protest for their Palestinian brethren. They are there because they are sick and tired of being treated like dogs by their oppressive leaders. They are there because they are finally fed up with living in a part of the world where the leaders have created a culture and life that is arguably the most backward and primitive in the entire world. They are protesting because all they want is to have a little self-respect in their daily lives.

Self-respect and dignity; words that are used over and over again in the Arab world. It is a common theme that appears regularly among the descendants of Ishmael. Judaism always knew this to be true and expressed it by the Torah's description of the events that animate their forebearers, Hagar and Ishmael. Dignity, status and position were central in the lives of the Arab nation from the very beginning.

Dignity, status and position were central in the lives of the Arab nation from the very beginning.

According to Jewish tradition the mother of this people, Hagar, was a princess of Egypt. She came from royalty and lived a life of opulence. But her father encouraged her to join Abraham's family as a servant figuring "it is better to be a servant to the prophet Abraham than a princess in Egypt." But Hagar was never fully comfortable in that role. The moment the opportunity arose for her to break out of it, she did.

That happened when Abraham, under the insistence of Sarah who was barren, married Hagar who became pregnant right away, something Sarah could not provide. The Torah narrates that she immediately seized on the opportunity that her new status conferred and began to treat Sarah with disdain. This led to friction between the two women and Sarah humbled Hagar and effectively put her back in her place. Alas, Hagar did not wish to return to her previous status so she fled from Sarah. She did not get far before an angel of God appeared and told her to resubmit herself to Sarah's authority. He also told her that she shall give birth to a boy, Ishmael, who will be a "wild-ass of a man whose hand will be against everyone, and everyone's hand against him."

Hagar, demoted from princess to servant, was then promoted to being the wife and progenitor for the great leader, Abraham ― only to be demoted once again and finally dismissed all together with her son later on from the house of Abraham. Hagar and Ishmael, bouncing between two worlds of grandeur and servitude, and never really certain where exactly they belong.

In an article in this week's New York Times mentions:

"The street is not afraid of governments anymore," said Shawki al-Qadi, an opposition lawmaker in Yemen, itself roiled by change. "It is the opposite. Governments and their security forces are afraid of the people now. The new generation, the generation of the Internet, is fearless. They want their full rights, and they want life, a dignified life."

"Dignity" was a word often used Wednesday, and its emphasis underlined the breadth of a movement that is, so far, leaderless. Neither the Brotherhood nor a handful of opposition leaders ― men like Mohammed ElBaradei ― have managed to articulate hopelessness, the humiliations at the hands of the police and the outrage at having too little money to marry...

Indeed this is all the children of Hagar ever wanted, the only thing that Ishmael ever craves – a little honor, some dignity and respect.

Perhaps they will finally get it. If and when they do, maybe, just maybe, they will be happy enough with themselves to finally leave their Jewish cousins alone.

Circumcision in the 21st Century

The Shooting of Gabrielle Giffords

I Can't Taste My Starbucks Coffee

The Myth Of Visible Diversity

Goering and My Grandmother
Vayelech 5783: Regret and Repent
Rabbi Sacks: Focus On the Important, Not the Urgent
Put Your Foot Down: Are Human Feet Poorly Designed?
Comments
MOST POPULAR IN Current Issues
Our privacy policy
Aish.com Is Looking for Great Writers