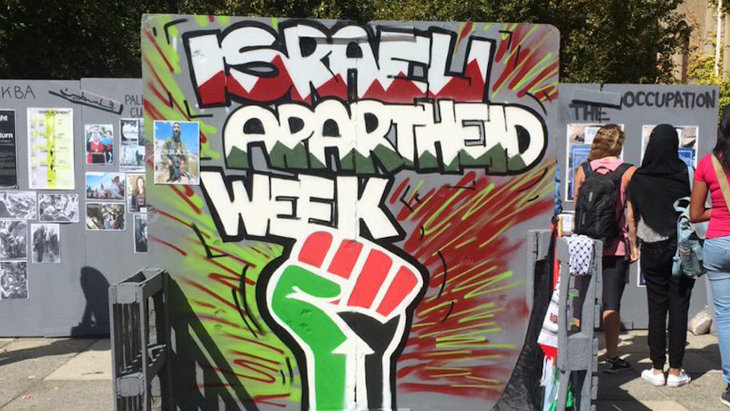 It’s time to call out the anti-Semitism and hypocrisy.

"Israeli human rights group says that Israel is not a democracy, it's an 'apartheid regime." This is the headline that recently blared on CNN

The fact that the charge comes from B'Tselem, an Israeli group that the Israeli government has called out for “spreading lies, slander and incitement against the state of Israel,” was apparently lost amongst the onslaught of negative media coverage.

Closer to home, Yoseph Haddad writes of waking up “astonished to discover I was living under a racist apartheid regime… How dare they say that I, an Arab Israeli who served along with Jewish soldiers in the Israel Defense Forces and managed hundreds of Jewish employees, live under an apartheid regime?... I look around at our neighbors in the region and thank God I was born in the State of Israel, the only democracy in the Middle East… the only country that grants minorities equal rights and the ability to influence their future.”

Haddad concludes: “B'Tselem, don't push your agendas at our expense.”

What is the root of this tumult?

In the 1980s, a coordinated campaign against apartheid South Africa combined U.N. condemnations, diplomatic isolation, an arms embargo, economic sanctions, divestment, and a cultural boycott – creating the perception of a regime that was illegitimate and immoral, to the point where the world demanded it be dismantled.

The pressure worked and apartheid collapsed.

Today, the enemies of Israel – after decades of terror attacks and wars of annihilation – have shifted tactics to portray Israel as the new “apartheid regime.” The flagship program of this delegitimization campaign is the annual Israel Apartheid Week, which turns college campuses into an anti-Israel bash-fest: eviction notices are placed on the doors of Jewish students, and the campus quad is filled with taunts about the “murderous, apartheid Israel.”

Drop by drop, Israel’s enemies are injecting their poison into mainstream consciousness – whether through Congressional tweets or the unhinged rants of Roger Waters. In 2019, more than 200 Israel Apartheid events were held in 30 countries, with storied institutions like Harvard University’s undergraduate council voting to provide funding. 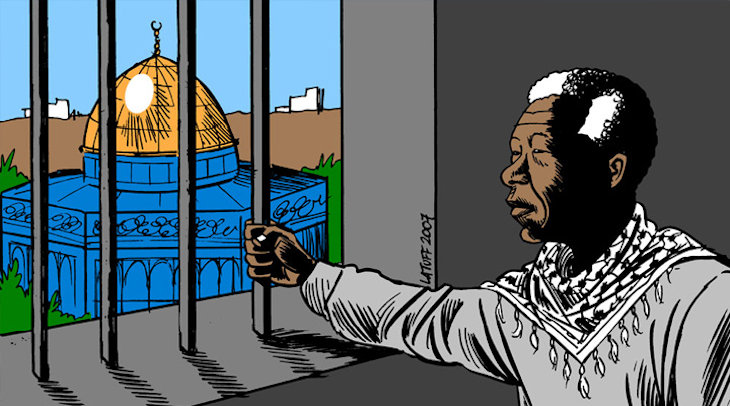 So let’s get down to the facts: Is Israel the next incarnation of apartheid?

In South Africa, blacks were segregated as second-class citizens. Interracial marriage was illegal. Blacks could not vote, could not attend white universities, or eat in white restaurants. Blacks had separate hospitals, beaches, buses, restrooms, drinking fountains and even park benches.

In Israel today, Jewish and Arab babies are born in the same delivery room, attended by the same doctors and nurses. Jews and Arabs share meals in restaurants and travel on the same buses and trains. They shop in the same malls, receive the same world-class health care, and participate equally in the political process.

Ironically, Arabs living in Israel enjoy more freedoms than Arabs elsewhere in the Middle East, where autocratic regimes regularly suppress freedom of the press, freedom of speech, freedom of association, and freedom of religion. Which was the first Middle East country to grant Arab women the right to vote? Not Egypt, Jordan, Qatar or any of the 23 Arab states. It was Israel.

Israel has the freest Arabic press in the Middle East. As for religious freedom, Israel permits Muslims to build minarets, wear burqas and pray in the streets – better treatment of Muslims than in “progressive” Europe – as evidenced by these headlines:

In Israel today, Arabs are represented in all strata of society – IDF, police force, Knesset, diplomatic corps, business, entertainment, sports, etc. etc. An Arab has served as Deputy Speaker of the Knesset, as Supreme Court justice, and as acting President of Israel. (In apartheid South Africa – unthinkable.)

Jewish schoolchildren in Israel study Arabic. At Hebrew University in Jerusalem, 30 percent of students are Arab. Hadassah Hospital – arguably the leading hospital in the Middle East, where one-third of the staff is Arab – was nominated for a Nobel Peace Prize for its equal treatment of Israelis and Palestinians (including wounded terrorists).

If Israel is such an oppressive, racist state, why did a survey by the Arab Center for Applied Social Research find that 90 percent of Israeli Arabs would rather live in the Jewish state than anywhere else – a position so fiercely held that 73 percent of Israeli Arabs say they would violently oppose any diplomatic agreement to include them in a future Palestinian state.

So when people level the charge of “apartheid” against Israel, what possible explanation is there other than anti-Semitism? 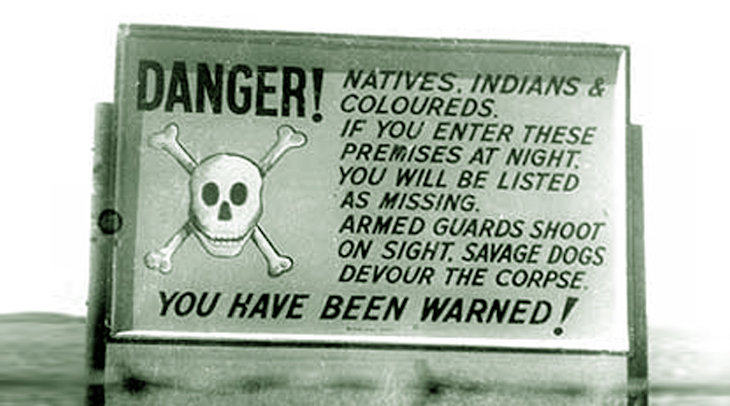 If the UN, human rights activists, and the media are looking for discrimination today, it ought to focus instead on apartheid practices in Arab states:

Where is the protest against gender apartheid in Saudi Arabia, where women have been arrested for driving a car, have no independent right to leave the country, and make up just 5 percent of the workforce – the lowest proportion in the world?

In the realm of religious freedom, too, Israel is a beacon of light. Since 1948, Israel is the only Middle East country where the Christian population has increased – rising by more than 400 percent. The headquarters of the Bahai faith is in Haifa, for the simple reason that Israel is the only country in the Middle East where a Bahai Temple is allowed.

In 1967 after recapturing the historically-Jewish Temple Mount, Israel shocked the world with an unprecedented show of religious tolerance by handing Muslim religious leaders autonomy over the site. Incredibly, to further protect Muslim rights, the Israeli government passed a law forbidding Jews from praying at their holiest site.

Meanwhile, Saudi Arabia openly practices religious apartheid, with special roads and even entire cities for “Muslims only.” In Saudi Arabia, the public practice of any religion other than Islam is illegal, and non-Muslim religious activities carry the risk of arrest, imprisonment, lashing and deportation. A notice on the Saudi Airlines website (subsequently removed) prohibited the possession of any non-Islamic religious symbols – Bibles, crucifixes and the Star of David – mentioning them in the same breath as narcotics, firearms and pornography.

Arab treatment of Jews is severely biased: Most Arab countries refuse entry to Jews and Israelis, or even to anyone whose passport shows evidence of having visited Israel.

The Palestinian Authority regards selling land to Jews as punishable by death and has pronounced such a verdict dozens of times. Even in Egypt and Jordan – countries with longstanding peace agreements with Israel – it is illegal to sell or rent land to Israelis.

Where are the protests against this Arab-sponsored apartheid?

This hypocrisy was highlighted one evening in 2011 at Britain’s Edinburgh University, when a speech by an Israeli official was boycotted in protest of “Israeli apartheid.” Protesters disrupted the speech with chants and taunts, forcing the speaker to abandon the stage. The incredible irony is that the speaker was Ismail Khaldi, an Israeli Arab-Muslim who holds a senior position in the Israeli Foreign Ministry – living proof of no “apartheid” in Israel, yet the target of protests against “Israeli apartheid!”

Ironically, anti-Israel activists never consider the immorality of Palestinians insisting their future state be Judenrein, the Nazi-era word meaning "cleansed of Jews." As reiterated by Palestinian leader Mahmoud Abbas: "I do not agree... to have living among us even a single Israeli on Palestinian land."

Israel’s human rights record may not be perfect, but it is doing its best in a difficult situation. If restrictions such as checkpoints and the security barrier are placed on Palestinians, there is genuine justification – unlike in South Africa, where black communities were not producing terrorists nor threatening to annihilate the white population. Apartheid-era South Africa was a repugnant regime intent on preserving white supremacy; Israel is a democracy intent on preserving itself from destruction. In other words, Hamas is not Mandela.

Kenneth Meshoe, a black South African Member of Parliament, set the record straight: “If anyone says to you there is apartheid in Israel, tell them the man who was oppressed by apartheid in South Africa says it’s a big lie. Coming from South Africa, it is laughable to draw a parallel. If the government of Israel is accused of being heavy-handed for wanting to wipe out terrorism, we are here from South Africa to say: You are not alone.”

Let there be no mistake: Those foisting the lie about Israeli Apartheid seek to portray the Jewish state as an illegitimate enterprise that, for the sake of humanity, must be terminated. That canard – even coming from a Jewish “human rights group” – is pure anti-Semitism.

Ben & Jerry’s Unfair Boycott of Israel
It Takes A Lot Of Faith To Be An Atheist
How Instagram Brought Back This Nostalgic Soup
What Makes Eli Run?
Comments
MOST POPULAR IN Israel
Our privacy policy