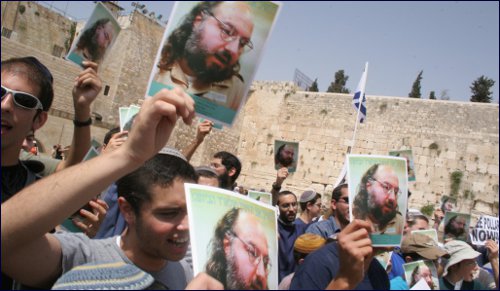 Justice demands that Pollard be released without regard to what Israel decides to do on the release of Arab prisoners.

Reports are circulating that the Obama Administration is considering releasing Jonathan Pollard, as part of an effort to encourage Israel to release Arab prisoners. Justice demands that Pollard be released without regard to what Israel decides to do. A case for Pollard’s release is based on both legal and humanitarian considerations.

Although many former government officials who were involved in Pollard’s prosecution now favor commutation, some continue to insist that he should serve his complete life term. In opposing Pollard’s release now, these former officials are violating the spirit, if not the intent, of the contract our government made with Pollard 28 years ago.

Jonathan Pollard entered into a plea bargain with the United States government after he was found with unauthorized, classified material in his possession. He could have exercised his right to trial by jury and he might have been acquitted of the most serious charges, because there was little admissible evidence that he was spying for a foreign country. Instead, he confessed to spying for Israel, a close American ally, and agreed to plead guilty and cooperate in full with the government’s investigation and damage assessment. In exchange, for giving up his important constitutional rights, Pollard was promised that the US would not seek the maximum sentence of life imprisonment. In other words, our government agreed that a sentence of years less than life imprisonment was sufficient to satisfy the needs of justice for Pollard, in light of who he spied for, how extensively he cooperated with the investigation, and how much time, money and risk he saved the government by pleading guilty. A sentence of years, less than life imprisonment was sufficient, the government agreed, to deter others from spying for allies. That was the “quid” for Pollard’s “quo” in pleading guilty: The government’s solemn agreement that a sentence of less than life was enough!

The prosecution then violated the plea bargain by submitting an official affidavit from the then Secretary of Defense, Casper Weinberger, who, according to Lawrence Korb, assistant Secretary of Defense under Weinberger, was motivated by “a lack of sympathy for Israel” – an understatement considering Weinberger’s long history of animosity toward the nation-state of the Jewish people. In his affidavit, Weinberger erroneously characterized Pollard’s crime as “treason”, exaggerated the harm done, and demanded a sentence of life imprisonment. By submitting this demand, which was inconsistent with its agreement not to ask for a life sentence, the prosecution violated the spirit if not the letter of their plea bargain.

There is no way any competent lawyer would have advised Pollard to give up his right to a trial, after which, if he were convicted, he could receive at most life imprisonment, in exchange for an agreement that included the submission of an affidavit from the Secretary of Defense demanding the maximum sentence of life imprisonment. For a lawyer to agree to such a “lose-lose” deal would have constituted ineffective assistance of counsel. The sentencing judge, relying on the impermissible and exaggerated Weinberg affidavit imposed a sentence in excess of what the plea bargain contemplated and what the prosecution agreed would be sufficient: He sentenced Pollard to life imprisonment. The sentence was and remains, the harshest one ever imposed on an American who pleaded guilty to spying for an ally. The usual sentence for such crimes is in the single digits.

Prosecutors not only broke their plea bargain back at sentencing, but some of those former prosecutors continue to break it now by insisting that Pollard’s sentence not be commuted to a term of years consistent with what they agreed to recommend in 1986. Nothing has changed for the worse over the 28 years Pollard has been in prison. Pollard has been a model prisoner; he has apologized for his crime; consequences falsely attributed to his actions by Weinberger and others now have been correctly attributed to Aldrich Ames and others who spied for America’s enemies; Pollard is seriously ill and getting old.

The time has come for the US government to keep its word and reaffirm what it agreed to tell the judge back in 1986: namely, that a sentence of years, 28 plus years, rather than a sentence of life imprisonment is enough to satisfy the demands of justice for Jonathan Pollard. Even if prosecutors refuse to comply with their plea bargain, the president – who has the exclusive authority to pardon or commute – should do the right thing and commute Pollard’s sentence to the long time he has already served.

Professor Dershowitz consulted with Pollard’s defense lawyers in the 1980’s and 90’s. His autobiography, Taking The Stand, was recently published.

Professor Cotler is a member of the Canadian Parliament and its former Minister of Justice and Attorney General. He too consulted on the Pollard case.

In Memory of Leiby Kletzky

7 Ways You Could Help Israel
Chukat 5782: Let’s Play the Blame Game!
The Sin of Moses: The Two Ways to Communicate
In Aftermath of Chicago’s July 4th Shooting, Local Moms Provide Countless Points of Light
Comments
MOST POPULAR IN Israel
Our privacy policy