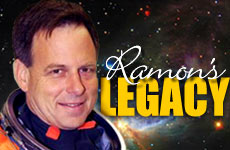 He embodies some of Israel's highest aspirations, most painful memories, and the dream of Jewish unity.

The image is seared in our national consciousness: deadly white streaks across the blue Texas sky. Not since the assassination of Yitzhak Rabin has one death so shaken the State of Israel. For Ilan Ramon was more than Israel's first man in space. He was a composite of the Jewish nation – child of Holocaust survivor, decorated IDF air force pilot, galvanizer of American-Israel ties, and self-declared representative of all Jewry.

For 16 days, Ilan Ramon defied gravity by lifting his country from the morass of incessant terror, a battered economy, and vilification in world political and media circles.

For 16 days, Ilan Ramon embodied the age-old Jewish yearning to soar beyond the heavens.

And for 16 days, Ilan Ramon not only represented our nation, he made every individual Jew feel connected and proud.

That is what makes his death all the more gut-wrenching.

It has been said that three main themes define contemporary Jewish life: Torah, Zionism, and the Holocaust. Nearly every Jew will cite one of these as the primary source of his Jewish identity.

Ramon had impeccable Zionist credentials. As a combat pilot in the Israeli Air Force, he arguably held the country's most prestigious job. He was a member of Israel's first F-16 squadron, fought in two wars, and survived a collision where he ejected from his jet.

“I'm not afraid,” Ramon stated flatly when I asked him about his upcoming shuttle mission. It was more dangerous to drive on a highway than to fly in the shuttle, he bemused.

Although he was not afraid, he knew the risks involved – just as he knew the risks in 1981, when he and seven other pilots flew a daring raid to bomb the Iraqi nuclear reactor at Osirak. They flew over enemy Arab territory for hours, avoiding detection with their tight formation that emitted a radar signal resembling a commercial airliner. Ilan volunteered to fly at the vulnerable rear position, since he was the only one not married.

Ramon underscored the Jewish principle of doing the right thing, even when it means going against the grain.

Yet as Israel celebrated the successful raid, condemnation was near-universal. A prominent U.S. senator called it "one of the most provocative, ill-timed and internationally illegal actions taken in that nation's history."

In this light, Ramon and his colleagues underscored the deep Jewish principle of doing the right thing, even when it means going against the grain. It's a trait bequeathed by the first Jew, Abraham, whose moniker "Abraham Ha-Ivri" (the Hebrew) literally translates as "the one who stands on the other side." As the entire idol-worshipping world stood on one side, Abraham and his monotheism stood firmly on the other.

In the spirit of Abraham, those who bombed the Iraqi reactor were vindicated with time. Two decades later, as Washington prepared to oust Saddam Hussein, the international community is ever grateful for Israel's strike at Osirak. At a memorial serviced in Houston, President Bush told Ramon's family: "Ilan bombed the Iraqi reactor, and I will finish the job."

It was widely publicized that Ramon's space luggage included a mezuzah adorned with barbed wire symbolizing the concentration camps, as well as a copy of the drawing "Moon Landscape," created by a 14-year-old boy killed in the Nazi inferno.

Yet for Ramon, the Holocaust was more than mere symbol. His mother survived Auschwitz, and his grandfather was murdered there. As such, Ramon saw his shuttle flight as testament to the invincibility of the Jewish people.

"The look in their eyes is very powerful," Ilan told me of his meeting with concentration camp survivors. "They see their hopes that had died in the Holocaust as living on through me. They see that despite the horrors we have endured, we are going forward."

"I am ready to sacrifice my life to prevent a second Holocaust," Ramon said in 1981.

It is difficult for outsiders to understand how deeply the Holocaust is embedded in Jewish consciousness. With the promise of "never again," the State of Israel arose from the ashes of Hitler's ovens, and the Holocaust plays a central role in the Israeli obsession with survival.

In June 1967, as Arab armies amassed on Israel's borders, Martin Luther King Jr. was asked on national television if Israel has justification for launching a pre-emptive strike.

Incredibly, Ramon viewed his 1981 Iraqi mission in this context. "If I can prevent a second Holocaust," he was quoted as saying then, "I'm ready to sacrifice my life for this."

Between his air force heroics, his Holocaust ancestry, and his seat on the space shuttle, there was surely enough for the Israeli media to confer hero status on Ramon.

But for Ilan, there was much more he hoped to achieve. He knew there is something even more central to our identity, and that Jewish destiny cannot survive without Judaism.

That is why, when Ramon spoke with Prime Minister Ariel Sharon during a televised news conference from outer space, he pulled out a Torah scroll. Yes, this special wallet-sized scroll symbolizes the Holocaust, having survived Bergen-Belsen. Yes, this scroll – whose owner is a physicist at Tel Aviv University and oversaw one of Ilan's space shuttle experiments – symbolizes Israeli achievement in technology.

Ramon held aloft a Torah scroll and declared the importance of preserving our religious traditions.

Yet most importantly, as millions of Israelis sat glued to their TV screens, Ramon held aloft this Torah scroll and declared that "it is very, very important to preserve our historical tradition, and I mean our historical and religious traditions."

Ramon was reaffirming the centrality of a Torah that neither Hitler's Hell, nor a long list of oppressors before him, could extinguish.

For Israel, a country that could not agree to include God's Name in the Declaration of Independence, this was an enormous step forward.

Ramon added other important Jewish elements to his flight. He sanctified the Shabbat with the first intergalactic Kiddush. He ate kosher food. And as he passed over Jerusalem, he recited the age-old declaration of Jewish faith: "Shema Yisrael – Hear O Israel, the Lord our God, the Lord is One."

By placing Torah tradition in such a highly visible role, Ramon broke from the norm of Israeli public figures who tend to view Jewish observance as the realm of the "religious." This makes Ramon's actions all the more praiseworthy, and his reward all the more great.

After the tragedy, I saw an editorial cartoon that depicted a father and son, gazing at the night sky. Seven stars dotted the heavens – six regular stars, and one Star of David. As the father placed his arm around the boy's shoulder, he pointed to the Star of David and explained: "That one is Ilan Ramon."

For 16 days, Ilan Ramon occupied the world stage, and everyone knew that the Star of David on his shirtsleeve meant he was a Jew.

The entire world looked at him and wondered: What is a Jew?

What they saw is someone who ate kosher food, carried a Torah scroll, and was not afraid to give the ultimate sacrifice for his people.

That is a Kiddush Hashem, a sanctification of God's Name, the single highest level that a Jew can achieve.

For 16 days, there was no right-left, religious-secular, or Israeli-Diaspora rifts among our people.

For 16 days, we felt what it means to be a unified nation. This rare glimpse relieved so much of the pain that accompanies its lacking.

To have that image so suddenly and brutally smashed was a visceral shock to our collective system.

If one word could describe Ilan's death, it is the Hebrew word challal, which has three separate meanings: Outer space. A human corpse. And a vast, crushing emptiness.

But as Ilan taught us, Jewish destiny means to pick up the pieces, gather our inspiration, and move on.

Ramon gave us so much, and now it is time for us to give back – to continue his legacy, that his death not be in vain.

The Talmud tells the story of a man who came upon a tree – in Hebrew, ilan – and enjoyed its sweet fruits and pleasant shade. Before departing, he wanted to bless the tree. But its fruits were already sweet and its shade was already pleasant. So what more could he wish for that ilan?

The man said: "May it be God's will that all which derives from you, will be like you."

Ilan Ramon gave each of us so much, and now it is time for us to give back – to continue his legacy, that his death not be in vain.

Perhaps we can try to feel more connected, to care about those who are different from us, knowing that every Jew is holy, and has the potential to create a Kiddush Hashem.

And we can, like Ilan, put Jewish tradition at the forefront of Israeli public life – not out of coercion, but through a recognition that Torah is the foundation from which all else flows.

And we can, like Ilan, pursue the dream that – despite the tension and enmity – underneath it all we are united as one family.

"We have to find a way to bring our people closer together, to show more patience and understanding," Ramon told me with urgency in his voice.

In 16 days, Ilan Ramon reached the heights of this world. In one shattering moment, he acquired his place in the next world.

May his memory be for a blessing.

Mandy Patinkin, I Hear Your Cry
The Japanese Everything Bagel Spice Recipe
How To Stock A Jewish Pantry Wherever You Live
Blessing on Chewing Gum
Comments
MOST POPULAR IN Israel
Our privacy policy