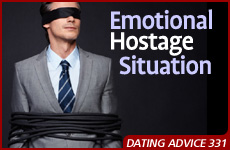 His dropping out of sight has friends deeply concerned.

My friend Dan is in the middle of the weirdest relationship I've ever seen. He's a rather traditional Jew who met a non-Jewish woman with a child this year. After that he went from Mr. Popular to completely disappearing from his friends’ lives. He stopped all contact with female friends that she felt threatened by. Other friends were also cut off. The one time we all met this woman she acted with disdain toward us, barely speaking a word except to chastise our friend for forgetting to remind her to call the babysitter. Dan systematically "de-friended" many of his Facebook friends, and then dropped off the site completely.

Dan is no longer allowed to partake in his favorite activities such as water skiing, playing bass guitar, and studying Torah. Now we have accidentally found out that they are engaged. Even his nearest and dearest friends were not informed. We're not sure why he chose to suddenly drop out of everyone's lives; he did not behave this way with previous girlfriends.

We're truly concerned for his sanity. What should we do in a situation like this? Do we try to talk to him, or let him go through with this insane marriage and hope that he eventually comes to his senses?

Sometimes, when a friend or relative is concerned about something they see, it should be left to the dating couple to resolve. In time, the concerned friend or family member may come to realize that what they believed was “an issue” is actually a clash between their personality and that of their friend's dating partner, and the couple's relationship is fine. Or perhaps their friend has chosen has a background, lifestyle, career, or manner that is very different from what they had envisioned, and it's hard for old friends to get accustomed to this.

That is definitely not the case here. Your friend had a strong Jewish commitment and yet became involved with a woman who isn't Jewish. You're also worried at how quickly he seems to have abandoned everything that once had so much meaning for him – his religious practices, interests and friends. This in itself is cause for concern.

Only when the glow of infatuation fades will he question these choices.

Sometimes, a person gets so caught up in infatuation that they make drastic life changes, to accommodate their partner without really thinking them through. Part of him may understand that something isn't "right," but somehow he cannot acknowledge it or find the clarity he needs. It's only later, when the glow of infatuation fades, that he will start to question and even regret the choices he’s made.

But there's another, very serious element to what you have observed: signs that your friend is being controlled by the woman he is planning to marry. Your description fits a classic pattern of a controlling and abusive relationship.

When more than one close friend or family member perceives something strongly negative about someone’s relationship, it is often an indication that something really is wrong. We know of three young women who approached their engaged friend's parents to confide that they were worried about her. They'd been disturbed by certain things they observed, and it turns out that the young woman's parents had also been worried by what they'd seen, but had been afraid to interfere. Once the parents and friends had confirmed each others’ feelings, they all sat down that evening to talk with the bride-to-be. You guessed it. She admitted that she, too, was worried about marrying this man. He was highly critical of her and berated her in both public and private, often bringing her to tears that she tried to hide from everyone. With the support of her friends and parents, she broke the engagement. And she admitted that if they hadn't come forward, she would not have had the courage to do this.

In your case as well: Given that more than one person sees a serious problem in the relationship, even if you cannot put your finger on exactly what troubles you, it's important to express your concerns to your friend. It's crucial to keep in mind that you may only be seeing one part of the "story" and there may be additional information to allay your concerns. Nevertheless, we recommend telling your friend what you have observed and why it concerns you.

Don’t preach or demand that he end the relationship.

There are ways to convey this information without seeming accusatory or judgmental, and without putting your friend on the defensive. We suggest that you and a few other friends get together with him and begin by saying, "We came here today because each of us cares about you very much. There's something that we're all worried about, and we wanted to speak with you about it. All we ask is for you to listen to what we have to say." Then, each of you can describe what you've observed and explain why it worries you. Don’t preach to your friend, or demand that he end this relationship. Just ask him to listen and to think about what you are saying. He need not feel obligated to respond or explain in any way.

Remember that the purpose of this meeting is to encourage him to think about what you've said and look at his relationship from a different perspective so that he can acquire clarity. Ultimately, he's the one who has to make a decision about whether to continue the relationship or not. Any attempts to pressure him to your way of thinking are likely to backfire.

Since you've described a scenario in which your friend may be dominated by a controlling partner, it may be helpful to speak with a therapist who specializes in interventions, for guidance about how to arrange this meeting and how to conduct your "intervention.”

Don’t forget: The overriding sentiment to express is that you care about him and will support him. It is also important to understand that after all your efforts, he may still choose to marry this woman. Let him know that you are his friends, no matter what choice he makes, and that you will always be there for him. If your suspicions are correct, he may need you sooner than he thinks.

Dating Advice #143 - Merging Assets
Blessing on Chewing Gum
Was Rahab a Prostitute?
Extras In Our Own Epic
Comments
MOST POPULAR IN Dating
Our privacy policy