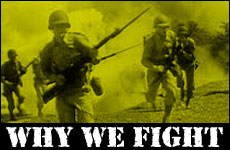 It was clear to the soldiers why they fight. It was also clear why they’d prefer not to have to.

In Why We Fight, one of the last episodes of Steven Spielberg’s remarkable mini-series, Band of Brothers, the American soldiers who form “Easy Company” are in Germany as the Second World War draws to a close.

After their arduous journey from basic training to being thrown out of a plane into occupied Normandy, they finally see the Nazi enemy in retreat, and take a moment to reflect. Was this victory worth the danger and the sacrifice, and the loss of their friends? A chance discovery by some sergeants on patrol in the woods brings that question into sharp focus.

They stumble across a concentration camp. This scene, the discovery of such an evil place, is the most vivid and discomforting. The people they find are starving, emaciated and close to death. They question the prisoners about who is being held here. One US soldier translates the answers. “Criminals?” he asks. “No,” comes the reply, “musicians, artists, teachers: Jews.” The evil of the Nazi project that they have been fighting against for so many years is no longer abstract: the soldiers realize why they fight.

It is natural for soldiers to continually wonder why they fight, but I spent last week with several Israeli soldiers who were in no doubt about their mission. University students, in their mid-20s and all active reservists, were recalling their battle experiences prior to a major speaking tour of campuses around the world.

Yair told me about being in a pitched battle with Hezbollah terrorists during the Second Lebanon War of 2006.

Hezbollah fighters do not wear uniform and operate specifically from civilian areas, where ordinary residents are essentially human shields. On this day, Hezbollah decided to make the situation more complicated. A truck arrived in the middle of the battle. Ten boys, about eight years of age, got out of the truck, armed with guns.

They had been driven into the conflict. In the middle of battle, Yair saw the moral depravity of the enemy and knew in that moment why he fights.

Adam told about receiving a call to his mobile phone from the anguished leader of a Palestinian village. It was the height of the violent Palestinian intifada (uprising) and Adam’s job was to be a liaison between humanitarian NGOs, Palestinian leaders and the IDF. Every Palestinian community leader has Adam’s cellphone number.

The call he received that day was a cry for help. A Palestinian boy was playing in his village and his ball had fallen into an olive press. While trying to retrieve it, the boy got his arm stuck in the blades of the press causing him excruciating pain. Adam was being asked to enter the village – hostile to Israelis – and assist.

While entering the village, the locals stoned their vehicles but after saving the boy’s life, they left to Palestinian cheers. Adam was clear why he fights.

Lital told me she was one of five girls in a combat unit of 100 males and was in charge of handling security checkpoints between Israeli and Palestinian areas. Of course, in an ideal world Israel would not need security checkpoints but, as she was checking females coming through, Lital was in no doubt of why they were necessary.

“They save lives,” she told me, asking me to consider the case of a pregnant Palestinian woman who was brought to a checkpoint in an ambulance which, once inspected, was found to be carrying concealed explosive devices. “Take a second,” she asked me, “to understand what kind of dilemma an 18-year-old soldier is presented with when on the one hand she sees a heavily pregnant woman, apparently desperate to go to hospital, but at the same time, fears it is a hoax that will cost others’ lives.”

Knowing she faces an enemy that would use a pregnant woman about to deliver as a decoy and the clear and present danger that Israeli citizens face from this threat; Lital was clear why she fights.

As clear as it was to the soldiers I met as to why they fight, it was also clear why they would prefer not to have to.

Itzik told me about the time he was on duty and was preparing to leave for the weekend to get some much-needed rest. Suddenly, intelligence came in that a suicide bomber was on the way to an Israeli mall. Itzik and his unit dropped everything to hunt for the terrorist. One of the people he questioned during their search was a Palestinian named Mohammed. Itzik recalled conversing with him: “Listen, Mohammed, I don’t want to be here,” he said, “I’d prefer to be at home with my friends and family.”

Mohammed looked at him and replied, “I don’t want to be here either. I’d rather be at home with my kids. We’re the same: we both want to live in peace and quiet. The main difference between you and us is that you can say it out loud.” Itzik told me at that point he realized that they were both hostages of Hamas.

These young IDF army officers will be visiting communities and campuses across the US and the world over the next couple of months. They are not spokespeople. They are not officials. They are not politicians. They are representatives of a citizens’ army of a people who wish to live in peace and freedom, a freedom that must be fought for. And that is why they fight.

Michael Dickson is Executive Director of StandWithUs in Israel, an international educational nonprofit dedicated to supporting Israel and fighting antisemitism around the world. Michael is a Senior Fellow at the Center for International Communication of Bar-Ilan University. In 2016, he was listed as the fourteenth most influential Jew on Twitter. He is the 2019 winner of the Bonei Zion Prize and in 2020, he was listed on the Global Jewish 100. He lives in Israel with his wife and five children.

Michael Levin: An Israeli Hero for Our time
Scientific Curiosity and the Divine Encounter
Mind Over Milkshakes
Love the Convert
Comments
MOST POPULAR IN Israel
Our privacy policy
Aish.com Is Looking for Great Writers