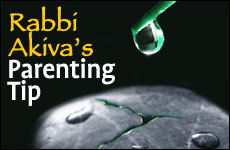 The secret is gentle dripping water.

Dripping water. That’s how a parent has to speak. Like a slow and constant drip. Think of the child as a crop. There are different ways of watering crops. You can pour on them with rotary sprinklers, a whirling deluge, or you can conserve your energy and work on the roots, gently through a network of connections, drip irrigation, which was invented here in Israel. You can drip on your children.

And one day they will grow in the direction you have guided them.

I learned this concept of gentle parenting recently when a woman told me something very important, something I wish I had known when I was parenting little kids. But it is still relevant for parenting older kids:

Isn’t that what a parent is anyway ultimately? A voice inside of a child.

Think of our religion, how we say the same things over and over—the weekly Torah portion, the prayers. The hope is that those words one day will enter us, define us, change us, slowly.

God after all created the world with words. And he didn’t have to yell to create. The Zohar says that he whispered.

This gentle method takes a lot of pressure off of the parent. She doesn’t have to get her way. She just has to define her way, describe her way, articulate her way, know her way and just by uttering her way, she plants a seed within the child that can lead to movement.

We usually think of movement as quick: quick obedience, rapid listening. But children aren’t built for rapid response to their parents. How often it is that they don’t respond, at least not the way you want them to.

So now when I hear parents yelling at their kids I am a little bit shocked. I used to get into crazy power struggles with my kids. I wanted them to clean their rooms and do their homework and brush their teeth and sit at the table and go to sleep at a proper hour and I wanted them to obey me. After my son’s murder, it was so clear that the control I thought I had was false. I had no power. Now I was happy because they were alive. I truly appreciated them. I wanted to be with them, just to be with them. I didn’t need them to listen to me.

It’s amazing that the power struggles stopped. Now for me to get into a power struggle with a child is rare, very rare. Yes I occasionally lose it but I don’t have to be right and I don’t have to force my will. I can be like water dripping on a rock. The great sage and scholar, Rabbi Akiva, a man who first studied the Torah when he was 40 and had no confidence that he would be able to learn it, noticed the way that water had hollowed a cavity in a rock. He said something to the effect that if gentle water could hollow a rock, then the words of Torah (which are compared to water) could also penetrate him.

Our words are water and sometimes our children are rocks. But rocks can be sculpted. Especially if you willing to wait.

Sherri Mandel is now judging the Stories from the Heart Contest at JewishStoryWriting.com. Click here to enter.

Sometimes Quality Time is Enough
Why Are The Prayers Of Yom Kipur So Repetetive?
Ha'azinu 5783: A Time for Unity!
Twisted Thinking
Comments