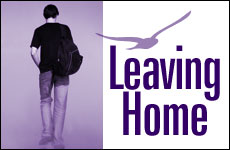 Saying goodbye is supposed to be messy and conflicted.

With his pillow in his arms and his suitcase in hand, he turned to wave goodbye as he opened the door to the school. And as I watched my little boy, my mature, grown-up, 18-year old little boy, leave the cocoon of our house, the shelter of our home, I cried.

They were tears of longing, sorrow, and loss, and also tears of joy, excitement, and wonder for him and his new, fresh, just-beginning life. I always knew this day would come. I’d waited for it with anticipation, and with dread. The beginning of his independent life, the end of our life as a complete family unit, all sleeping under one roof, all eating dinner at the same time each evening, all coming and going from the same home base.

He was ready to soar, but tethered to his crying mother, too.

There were all the things I’d been waiting to do when I had more time and fewer children to actively care for. And then there was the awful feeling of emptiness in the pit of my stomach every time I replayed that image of his turning to wave goodbye, a sweet smile on his face as he wavered between his eagerness to immerse himself in his blossoming experiences on the one hand, and his feeling the connection to me, to our family, to our home on the other. He was ready to soar, but tethered to his crying mother, too.

I said all the right things: “I’m so excited for you!” “This is such a wonderful day, the start of a wonderful life!” “I love you, I’m proud of you, I know you’ll do great things; you’re a good person, my son.” But all the while, the tears flowed, belying my sadness even as I spoke my words of encouragement to him to “go, fly away, live your life!”

I want to turn back the clock, to experience our life together all over again. I kept picturing him playing in the sandbox; a cute, innocent boy of five. Or wanting to stay up late at night and talk to me in the kitchen when he was just becoming a teenager. Or laughing as he played in the pool with his siblings, roughhousing and dunking and swimming in the summer sun. Or even just yesterday, helping his little sister along the hiking trail, lifting her over the brook, as strong as a man.

Now he’s off to new adventures, new horizons, his own life, his own decisions, the beginning of a new chapter in his life and in mine. I’ll miss him terribly. And I know his going away is the way it’s supposed to be.

It reminds me of another leave-taking. When my two-and-a half-year-old boarded the bus for preschool for the first time, his excitement quickly dissolved into tears of utter despair as he realized I wouldn’t be coming with him. I remember seeing his cute face, framed by oodles of blonde, cascading curls, crumpled into a visage of abject misery. Of course, I cried too, just as I cried today. But now that toddler is eleven, and he’s as well-adjusted as they come. The sadness, the leave-taking, the loss of babyhood, is all part of the healthy growing process. Even though the sadness feels terrible at the time, it’s a gateway to the next step in life.

This also brings back memories of when my parents sent my severely handicapped sister to live in a group home in a different state. Even though she had lived in their home for 25 years, even though she was so physically large that it was difficult for my aging parents to maneuver her in and out of bed, in and out of the car, to and from the toilet, even though they couldn’t live their own lives fully because finding a babysitter who could give her the constant care she needed was next to impossible, still, when they put her on the plane and waved goodbye, my father lay down on the floor of his office in his fancy law firm and laughed and cried and cried and laughed.

When saying goodbye is not messy and conflicted, that’s when I begin to wonder about dysfunctionality. The parents who told my teenaged client, “Please stay in camp for the next session too,” even though he told them he wanted to come home. The mothers who gleefully send their kids on the bus for the first day of school, excited to be rid of them for a few hours…. The lack of conflicted emotions might be easier to feel, but it’s not always the right way to feel.

I’ll accept the strange duality of my ineffable feeling of loss coupled with my confidence and assuredness that I’ve prepared him well, loved him well, taught him well, and that now is his time to fly.

Beat the Back to School Blues

5 Keys to a Happy Home

The Relevance of the Ten Commandments: A Shavuot Family Guidebook
Vayelech 5783: Regret and Repent
Rabbi Sacks: Focus On the Important, Not the Urgent
Put Your Foot Down: Are Human Feet Poorly Designed?
Comments
MOST POPULAR IN Family
Our privacy policy
Aish.com Is Looking for Great Writers