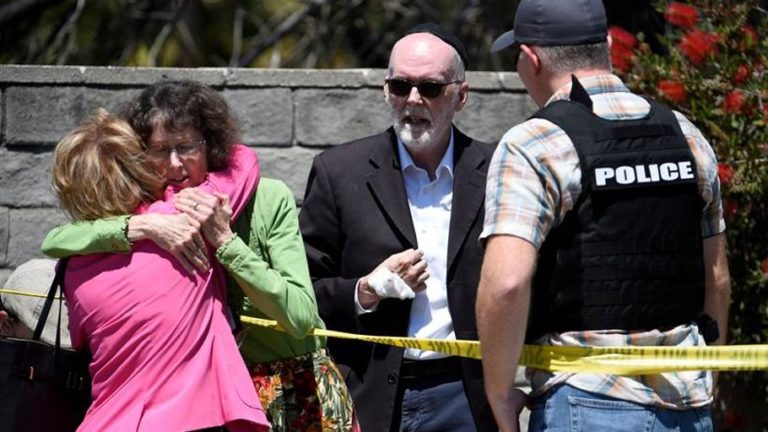 A gunman opened fire on Jews at prayer on the last day of Passover.

It has happened again. On Saturday, April 27, Jews praying in a synagogue found themselves targeted and marked for death again, the victims of another shooting. Six months after the rampage in the Tree of Life Synagogue in Pittsburgh that left 11 Jewish worshippers dead, another hate-filled gunman burst into a synagogue on Shabbat, intent on murder.

The Chabad synagogue of Poway, California, about 25 miles north of San Diego, was packed with up to 60 worshippers. In addition to being a busy Shabbat, it was also the eighth day of Passover, when the Jewish Yizkor prayer is recited; some congregants had made a special effort to attend to remember loved ones.

As they prayed, a local 19 year old burst into the synagogue brandishing an assault rifle, screaming that Jews are “ruining the world” and shooting at terrified congregants in the synagogue’s lobby. Three people were injured and one 60-year-old mother, Lori Gilbert Kaye, was murdered.

“Lori Gilbert Kaye is a Jewish heroine, and will be remembered as a heroine in Jewish history,” said Israel’s minister of diaspora affairs, Naftali Bennett. “She sacrificed her own life, throwing herself in the path of the murderer’s bullets to save the life of the Rabbi. But it is clear that such heroism and good deeds are not only characteristic of dear Lori in death, but that this was the way she lived her life – constantly doing charity and good deeds for those in need.”

Rabbi Yisroel Goldstein, 57, who was shot in the hand, refused to go to the hospital until he finished his sermon, calling for peace.

Congregant Oscar Stewart, a former US soldier, heard the shooting in the lobby and realized a gunman was in the building. “I ran out there and I chased him,” Mr. Stewart recalled. “He looked scared… I yelled as loud as I could in my mean sergeant voice. I yelled ‘Get down!’ and then I ran towards him.” Some witnesses report that the gunman’s gun seemed to jam at that point. He dropped his gun and ran outside. “He was a coward” Mr. Stewart explained later.

Noya Dahan, 8, a girl originally from Sderot in Israel, was hit by shrapnel in the face and leg. Her uncle Almog Peretz, 31, was shot in the leg as he ushered children in a playroom to safety, according to media reports. 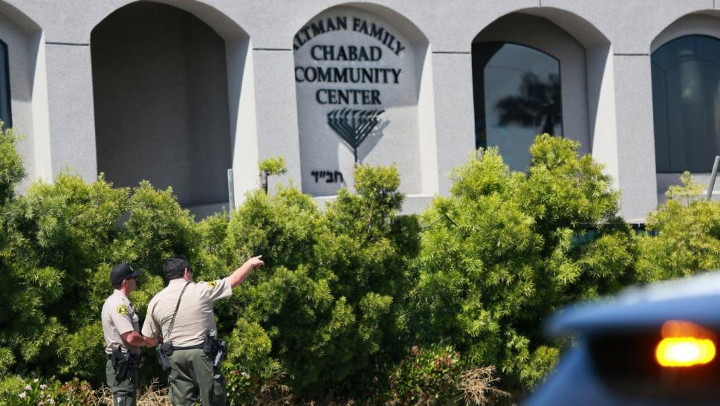 In the hours after the attack, authorities labeled the shooting a hate crime. The shooter posted a hateful racist, anti-Semitic screed on social media before going on his rampage. He said he was inspired by the massacre in two mosques in Christchurch, New Zealand in March and by the massacre in the Tree of Life Synagogue in Pittsburgh. “This was a pointed attack on Chabad, on the visible Jewish community here, and this is a collective attack on all Jewish communities,” declared Jonathan Greenblatt, the chief executive officer and national director of the Anti-Defamation League (ADL). “This is anti-Semitism unleashed. In a pattern where prejudice is minimized in an environment where intolerance is trivialized and when prejudice becomes politicized, we shouldn’t be surprised.”

Jews are under attack and offering thoughts and prayers before going back to our regular routines isn’t nearly enough.

A generation ago, Rabbi Kalonymus Kalman Shapira, the Grand Rabbi of Piaseczno, Poland, and rabbi of the Warsaw Ghetto, witnessed persecution and anti-Semitism on a scale that’s scarcely imaginable today. Rabbi Shapira’s answer was the very opposite of many people’s reactions to Jew hatred today.

Stripped of his freedom, of his ability to earn a living, marked for death, Rabbi Shapira refused to be cowed. In the unimaginable hell of the Warsaw Ghetto, he organized weekly classes on Jewish themes. Week after week, Jews responded to the violence and hatred all around them by studying with Rabbi Shapira and growing to new spiritual heights.

On the final days of Passover in April 1942, Rabbi Shapira urged his students to respond to the hatred they faced. “We can learn from the fact that the Red Sea did not split of Israel until the whole tribe of Benjamin had jumped in,” Rabbi Shapira taught; it wasn’t enough to hope and pray, our Jewish forefathers also had to act.

Rabbi Shapira was murdered in 1943, but his notes were discovered after World War II in the ruins of his house in the Warsaw Ghetto. “I beg and plead with every individual Jew to study my books,” he wrote in his manuscript. It’s a message from the midst of hate and violence that we need to heed today. With rising anti-Semitism, with horrific violence against Jews in America, in France, in Israel, Argentina, Russia, and elsewhere, we have to respond by strengthening our Jewish commitment.

When one of us is gunned down at prayer, we are all attacked. In the memory of the heroic Lori Gilbert Kaye who was gunned down in Poway because she was Jewish, let’s work on changing ourselves and our communities. Let’s grow in her memory and resolve to be proud Jews, to study Jewish texts, to strengthen our bonds with our fellow Jews. Let’s use this period after Passover, an auspicious time for spiritual development, to respond with real change and growth.

A Day in the Life of a Prison Chaplain

Being British for 350 years
The Softball Player
How This 6 Generation Bread Baker Brought Back Israel’s Ancient Grains
Olivia Newton John’s Grandfather was a Nobel-Prize Winning Jewish Physicist
Comments
MOST POPULAR IN Israel
Our privacy policy
Aish.com Is Looking for Great Writers