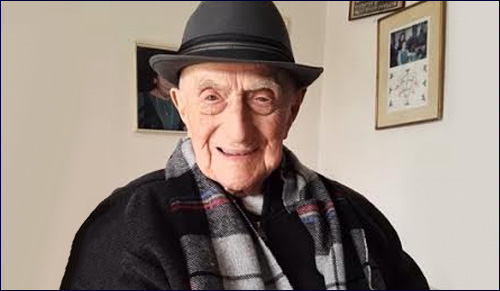 Yisrael Kristal is 112 years old and views his life as a miracle.

The oldest man in the world is Yisrael Kristal, a 112-year-old Israeli Holocaust survivor whose daughter attributes his extreme longevity to a mind-body connection. “He’s happy. This is the most important thing to be in every situation,” says Shula Kuperstoch of Haifa.

Her father attributes his longevity to God. He always called his life a miracle. Born Sept. 15, 1903, in Tarnow, Poland, as the son of a Torah scholar, he attended religious primary school until age 11. He remained religious throughout his life. 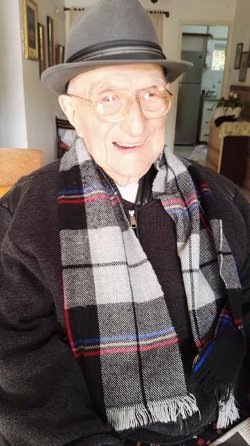 Kristal recalls the outbreak of World War I in 1914 when he was 11. Also etched in his memory for a century was the sight of Franz Josef I, the longest-reigning emperor of Austria and the last significant Habsburg monarch, passing through town in a car. Onlookers threw candy – which ironically has remained a motif in Kristal’s life ever since.

His younger years were bittersweet. Kristal’s mother passed away before the start of World War I. The Russian army captured his father who died soon after.

As a 17-year-old orphan, Kristal made his way to Lodz, Poland, one of the largest Jewish communities in Europe. He recreated his life first as a metalworker, then as a candy factory employee. The grueling physical labor of the latter job involved schlepping heavy bags of sugar. The experience foreshadowed events to come in adulthood.

Kristal would later own a sweets and chocolate factory in Lodz. After the Nazis invaded Poland, he and his wife and two children were ordered to move into the Lodz ghetto with 230,000 other Jews. The Nazis wanted Jews concentrated in ghettos to easily maneuver them. With that many people living in close quarters, adequate supplies of food and fuel became a problem.

His two children died in the Lodz ghetto and his wife perished in Auschwitz.

By then an expert candy-maker, Kristal was able to continue his craft in the ghetto. His family’s fate was heartbreaking; the children died there, and Kristal and his wife were deported to Auschwitz when the ghetto was liquidated in 1944. His wife perished. Kristal survived doing forced labor in Auschwitz and other concentration camps. At the end of World War II, he weighed just 37 kilos, or 81 pounds.

As his daughter told Aish.com, he then started to live. Protected by the Russian army, he was taken to a hospital to begin to heal. When he recovered, he returned to Lodz, re-established and worked at his business, and married again.

“The body was listening to his mind. His mind was strong. His beliefs were strong. His body also became strong,” Kuperstoch says.

Kristal rebuilt his factory destroyed in the war and returned to a sweeter life as a candy-maker once again.

In 1950, he and his wife made aliya and settled in Haifa with their infant son, Haim. They also became parents to daughter Shula. Kristal’s brood would extend to more than 20 great-grandchildren.

In Israel, Kristal first worked at a candy factory. He taught the owners, also from Poland, how to shape an entire production line of sweets. Later he parlayed that acumen into his own business, making yummy sweets at home and selling them at a kiosk in Haifa. His signature temptations included little chocolate bottles of liqueur gaily wrapped in colored foil and carob jam fashioned with chocolate-covered orange peels.

An optimist, he enjoyed making people happy. “The Holocaust did not affect his beliefs,” said Kuperstoch. “He believes he was saved because that’s what God wanted. He is not an angry person, he is not someone who seeks an accounting, he believes everything has a reason in the world.”

Kuperstoch says she doesn’t need a world record; she’s just happy to have her father alive.

After surviving without much food in the concentration camps, one of his philosophies concerned eating to live, not living to eat. He reasoned, “You don’t need too much” in life. 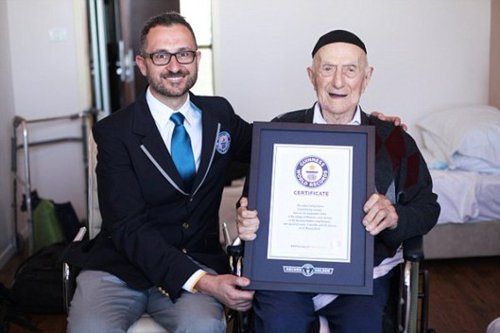 Susannah Mushatt Jones of New York, 116, is the oldest validated living supercentenarian. The top 60 on the Gerontology Research Group’s list are all women. As Robert Young, director of the group's Supercentenarian Research & Database Divison in the United States notes, “Women tend to live three to four years longer than men.” The group is a consultant to Guiness.

He added that longevity isn’t limited to a particular area of the world. “The maximum human life span is the same the wherever you go. Everyone has the potential to reach the same age.” His list includes supercentenarians from Argentina, Brazil, England, France, Germany, Italy, Jamaica, Mexico, Russia and Spain…and now Israel.

My Encounter with the Pope
The 21st President of the United States: Failure or Inspiration?
Hiding Their Jewishness
The Jewish Pope: Following the Questions Home
Comments