New Recipes for the New Year 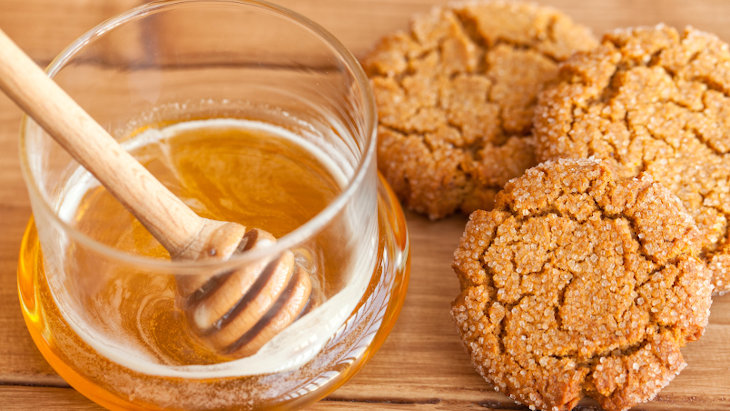 Sweet and delicious menu ideas for Yom Tov and for all year around.

It’s a wonderful time of year to include the sweet flavors of Rosh Hashanah. Apples, honey, fruits, and cinnamon are aromas and tastes that are warm and perfect for the fall in addition to Rosh Hashanah. These are just a few of the menu additions I’m including at my table. The ribs freeze well, the aroma from the rice smells like it’s going to be a sweet New Year, and the dessert is both adult and kid friendly and definitely more fun than any apple cake. The honey cookies are the best I’ve had and they make a very large amount so they are perfect to send over to a friend too. 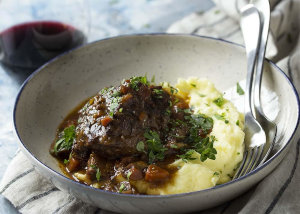 Photo by A Little Bit of Baking

It’s best to braise short ribs a day (or at least several hours) ahead of serving. First, this allows you to chill the sauce so it can be defatted thoroughly. Also, the flavors only get better with time. To reheat, arrange the meat snugly in a baking dish with sauce, cover with foil, and warm in the oven.

Position a rack in the center of the oven and heat the oven to 325°F. In an 8-quart Dutch oven, heat 2 tablespoons of the oil over medium heat. Season the ribs with salt and pepper and add half of the ribs to the pot (or as many as will fit without overlap), and cook, until nicely browned on all sides, 3 to 4 minutes per side. Transfer the ribs to a platter and repeat with the remaining ribs.

Pour off all but a thin layer of fat from the pan. Add the remaining 1 tablespoon oil and heat until simmering. Add carrots and onions to the pan. Cook, stirring and scraping up any browned bits on the bottom of the pan, until soft and lightly browned, 6 to 8 minutes. Add the figs, ginger, garlic, star anise, and cinnamon sticks, and stir until fully coated. Cook for a minute or two, then add 1/2 cup of the red wine into the pot and cook, stirring to scrape up any browned bits on the bottom of the pot, then bring to a boil and reduce until the liquid is reduced to about 2 tablespoons, about 1 minute.

Transfer all the ribs (and any juices that have accumulated) back into the pot. Pour the tomatoes, chicken broth, soy sauce, remaining 1/2 cup of red wine, and 1 cup water over the ribs, arrange the ribs as evenly as possible.

Bring the liquid to a simmer, cover, and put the pot in the oven. Cook, turning the ribs with tongs about every 40 minutes, until they are fork tender, about 2 ½ hours. Season to taste with salt and pepper if needed.

Serve the ribs with the sauce spooned over. Sprinkle with parsley, mint, and pomegranate seeds.

This is a wonderful Yom Tov fish because it incorporates some of the traditional flavors of the holiday, including pomegranate and honey. Although this makes for a nice first course, its showstopper appearance and great taste make it a main course in my home. It can be made a day ahead of time and rewarmed or served at room temperature. Do not freeze prepared fish, as the defrosting process changes the taste and texture. Frozen fish can be used, just defrost in the refrigerator, rinse, and pat dry before cooking.

In a large skillet, heat 3 tablespoons oil over medium heat. Add leeks, ½ teaspoon salt, and ¼ teaspoon black pepper and brown for 12 minutes, until lightly golden. Add balsamic vinegar, red wine, pomegranate juice and honey and bring to a boil and cook until syrupy and thickened, about 12 minutes. Remove from heat.

In a separate cast iron skillet, heat remaining 2 tablespoons of oil. Sprinkle cod with onion powder, paprika, remaining 1 teaspoon salt and ½ teaspoon black pepper. Sear cod, top side down, for 3 minutes, until slightly browned. Gently flip fish over, add ½ of leek mixture to the skillet and place in the oven to finish cooking, about 6-8 minutes.

To serve, transfer fish and onion mixture onto a platter. Top with remaining leek mixture and sprinkle with pomegranate seeds.

Alternatively, cod can be cooked in a 400°F oven for 12-14 minutes. Make the balsamic pomegranate jam as instructed and serve over fish with a sprinkle of pomegranate seeds. 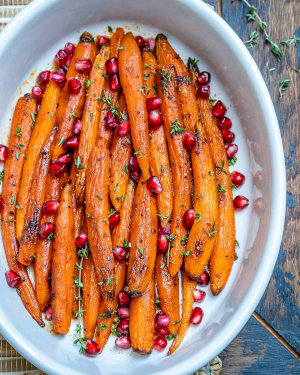 There is something about roasting vegetables that brings out the natural sweet caramel flavor. For Rosh Hashanah I often sprinkle them with pomegranate seeds and sometimes even roast dates with them too.

Preheat the oven to 400°F. Lightly grease a baking sheet.

Slice carrots, at an angle, into 2 to 3 inch pieces. Transfer cut carrots to a large mixing bowl.

Drizzle with oil and honey over carrots and add fresh thyme then season with salt and pepper. Toss to coat and spread out in an even layer on the prepared baking sheet.

Roast for about 20 minutes, or until carrots are caramelized and tender. Garnish with parsley and pomegranate seeds. 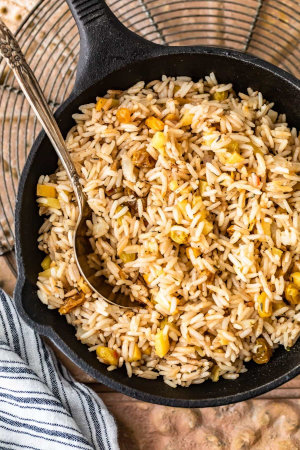 Heat oil in a large skillet over medium heat until shimmering. Add diced onion and apple; sauté until onion is translucent and apple and onion are tender, 5-6 minutes. Add rice and stir often until lightly browned and toasty about, 6-8 minutes. Add chicken stock, raisins, figs, kosher salt, allspice, cinnamon, and cinnamon stick, and stir. Bring to a boil. Reduce heat, cover and simmer about 15-20 minutes or until liquid is absorbed and rice is tender. Serve warm. 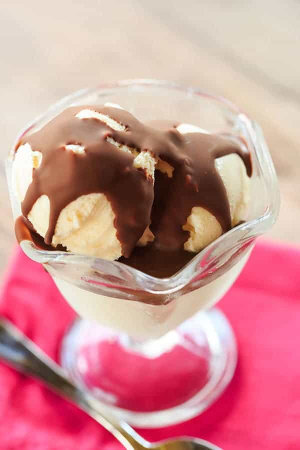 This is a fun and versatile dessert that is great for a Yom Tov meal. I use vanilla soy creamy ice cream. The apple sauce is great in crepes, on its own and covered in this yummy chocolate. The magic chocolate sauce hardens when it is poured onto cold ice cream.

In a heavy saucepan, melt the margarine over medium heat. Add wine and bring to a boil. Cook until wine has reduced slightly, about 5 minutes. Add apples, cinnamon, and sugar. Stir to coat.

Continue cooking for about 10 minutes, then stir in the lemon juice and vanilla.

Lower the heat to a simmer and cover; continue cooking for 20 - 40 minutes, stirring occasionally until the apples break up and sauce is chunky.

In a small saucepan, combine the chocolate and oil. Melt over low heat, stirring while melting, until smooth and uniformly liquid. Stir in the salt. 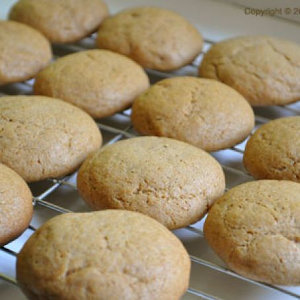 Classic and good! For real, these are good and moist and easy to make.

In the bowl of a mixer, beat eggs, vanilla, honey, sugar and oil, until well combined, about 2 minutes. Add baking powder, baking soda, cinnamon, orange zest and flour and beat gently until combined. Refrigerate dough for at least 30 minutes.

Preheat oven to 350ºF. Roll cookies into balls and place on lined baking sheets about 2 inches apart. Bake for 13 - 15 minutes or until lightly browned but soft in the center.

Menus for Before and After Yom Kippur
It Takes A Lot Of Faith To Be An Atheist
How Instagram Brought Back This Nostalgic Soup
What Makes Eli Run?
Comments
MOST POPULAR IN Family
Our privacy policy