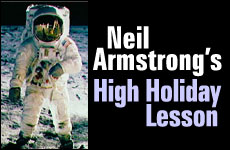 Ten words that changed the world.

It’s probably the most famous quote of the 20th Century.

It was said by the first man on the moon, Neil Armstrong, who died last week at the age of 82. It was heard by over 600 million listeners around the world.

As Armstrong stepped foot on the moon back in 1969, he uttered those famous words: “One small step for man, one giant leap for mankind.”

What a remarkable group of ten words which sum up so much.

Indeed, Armstrong’s small step with his foot (if one can describe any space motion as small) represented a marvelous achievement for humanity.

Interestingly, Neil Armstrong claimed that he actually said 11 words: “One small step for a man, one giant leap for mankind.”

But everyone else heard ten words without the one-letter article word, 'a' man, and simply heard, “One small step for man...”

Later, when Armstrong repeatedly heard the recording, he eventually admitted that he left out the word he had meant to say.

Does it make a difference?

Grammarians will tell you that it makes a world of difference.

The exclusion of the single letter word 'a' changes the connotation of the expression entirely, from a statement about one individual into a universal statement about mankind. Since “man” and “mankind” are synonyms, what Neil Armstrong actually said was that walking on the moon was both a small step and a giant leap for the human race. How can it be both? It was either small or giant!

Perhaps Neil Armstrong ended up saying an additional layer of meaning, one that is relevant to the High Holiday season.

Our giant leaps are really our small steps.

Our giant leaps are really our small steps. Our big jumps of transformation can only occur with consistent and small strides.

How indeed did man or mankind get to the moon? Did NASA just decide one day to fly to the moon or did it take years and years of small successes and preparation?

How does man or mankind or every man do anything? Do we ever just take a giant leap in order to get somewhere? Or do we go little by little, step by step?

How does a person finish a really long book? How does anyone finish the entire Chumash or Talmud? There’s only one way. Verse by verse and page and page. Small but steady steps which become giant leaps.

The world is made up of undetectable atoms and our bodies are made up of microscopic cells. So too, our spiritual makeup is defined by our small actions. The power of small actions for creating change is comparable to taking a pill for medicine where the active ingredient makes up merely one or two percent of the entire dosage, and a greater quantity would do more harm than good. Likewise, small actions do not provoke instinctive feelings of resistance. More often than not, grand resolutions create pressure, which can slowly but surely lead to a desire to rebel.

So giant leaps without taking the small steps often lead to failure. Changing any of our habits must be a gradual process and we must be careful not to accept upon ourselves anything that is more than we can handle. Especially now before the High Holidays as we look to change and improve, we would do better to implement small changes that ‘fly under the radar.’ Only slow and gradual growth has lasting power.

If someone ingests 1000 extra calories per day and then begins to eat 100 calories less per day, that’s a positive step. To stop everything ‘cold turkey’ is not easy, but making steady but small progress is something we all can do.

Valuing small successes applies to all of life’s triumphant experiences. We have to remind ourselves that every bit counts.

Each exercise movement helps build your body’s health. Small snowflakes add up to be feet of snow. Small bricks build an entire house. Every single small Ingredient makes a whole recipe. Seconds add up to minutes. Minutes become hours. Each dollar of charity keeps the cause alive. Each phone call to a lonely person makes that person feel needed and loved. Each helping hand clears a dinner table.

We are all parts that make up a whole. Each one of us can make the difference and help form the bigger picture.

Every small step of 'a' man indeed creates the giant leaps of life.

Affirmations
Deep Breaths
What Happened to the Truth?
The Japanese Everything Bagel Spice Recipe
Comments
MOST POPULAR IN Growth & Renewal
Our privacy policy