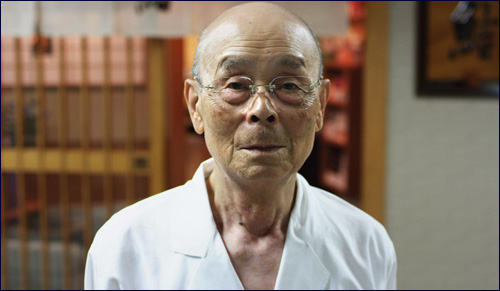 I just read the Torah in shul for the first time, thanks to an old Japanese sushi master named Jiro Ono.

Jiro Ono is a three star Michelin chef, an honor bestowed on a select few world class chefs. He runs a small restaurant called Sukiyabashi Jiro in Tokyo, Japan that seats only 10 people and has a set menu that costs approximately $300. You can’t just walk in off the street into Sukiyabashi Jiro – reservations are required, a few months in advance. Oh, and Jiro is 91 years old.

Jiro wakes up early every morning and goes to the market to select only the choicest ingredients from the finest vendors. Sushi apprentices clamor to work for him even though for the first few years (!) of their apprenticeship they are restricted to making rice and cleaning the dishes. He has singularly focused his entire life on one thing: sushi excellence.

Jiro was the subject of a critically acclaimed documentary, “Jiro Dreams of Sushi”. During one insightful moment, the filmmaker asks Jiro why he continues to work so hard, especially given his advanced age. Jiro replies, “Because as a sushi chef, every day I learn new things. Every day, I get better.”

If a 90-year-old Japanese sushi master sees it as his life’s mission to better himself every day, surely I can do the same thing.

Jiro’s approach to life resonated with me. If a 90-year-old Japanese sushi master sees it as his life’s mission to better himself every day, surely I can do the same thing. So I sat down and made a list of “stretch goals” for myself – i.e. achievements that were challenging but attainable. And one of those goals was leining (reading) the Torah in shul.

For the uninitiated, let me explain why leining is so difficult. The entire Torah is written on scroll parchment in the ancient tradition which has been passed down for thousands of years. The script is not the common Hebrew script but a stylized one that has no vowels or punctuation. Let’s look at that sentence again the way it might look if the Torah were written in English:

In addition, the Torah is chanted in a complex melody called “trop”, which – you guessed it – is also not in the Torah scroll. Finally, the person leining on behalf of the congregation cannot make any mistakes in reading. If he does, vigilant congregants will correct him on the spot.

When I told my friends that I was thinking about leining in shul their response was always the same: “Why would you want to do that?!” It was as if I had told them that I wanted to try getting waterboarded.

Apparently there is a commonly held belief that in order to be a good Torah reader, you need to start young, soon after your bar mitzvah, and then continue to lein in shul over the years so that the Torah portions remain fresh in your mind. When we are young our minds are like sponges and whatever we learn sticks with us for life. Case in point, I can still rattle off ‘Mon Autobiographie’ in fluent French from Monsieur Bauer’s sixth grade French class. So what is an old guy like me learning to lein for the first time?

I asked myself, WWJD – What would Jiro do?

So I began the journey. First I had to learn the trop – the musical notes. Then I selected a Torah portion. I started putting the pieces together – chanting the words together with the trop. My friend who is a rabbi and seasoned Torah reader gave me some pointers and then sent me on my way to practice. And practice I did, every day. At first it seemed daunting – my brain felt a sieve, not a sponge. But little by little I made progress.

I practiced with anyone who was willing to listen, including my eight-year-old son who would at times correct me. Ah the wonders of a spongy brain.

Game day arrived. All I had to do was deliver the goods…and deliver them I did! Or more accurately:

Was it hard? Yes. Was I perfect? No. Did I perspire profusely? Yes. But did I experience a deep sense of gratification from accomplishing a challenging goal that enriched my spiritual life? You bet.

My wife together with a friend sponsored a Kiddush at shul in my honor to celebrate. There was the typical Kiddush food like herring and Tam Tam crackers, but also an array of chocolate pastries that I love called “kokosh.” I don’t eat herring but on this occasion I made an exception. As I took a bite, I imagined that it was a piece of sushi and said, “This is for you Jiro. Thanks for helping me dream of leining.”

No Time for Happiness