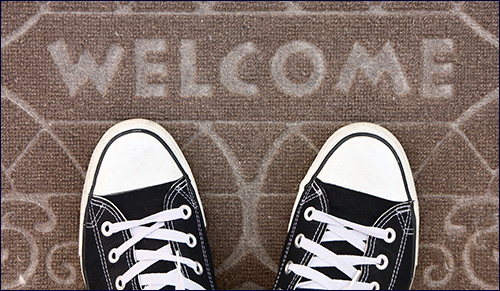 Would you give your home to a needy family?

Kevin and Hannah Salwen of Atlanta sold their 6,500 square foot house and downsized to a house half its size. They then donated more than $800,000 from the proceeds and wrote a book about their project called The Power of Half. Their blog has inspired thousands of others to give in innovative ways.

Their story reached Tony Tolbert, a UCLA lecturer and attorney in Los Angeles. He wanted to make a difference, but he wasn't sure how. He thought of his father, James Tolbert, who always welcomed people in their house.

"I don't remember a time when there wasn't someone in need staying in our home," Tony remarked. Inspired by his father and the Salwen's project, Tony asked himself, "What can I do?"

Tony decided to give his home to someone in need for a dollar a month. At age 51, Tony moved back home with his mom and gave his own house to a homeless woman and her four children for a year. The fortunate recipient, Felicia Dukes, a single mother of four, was shocked that a stranger wanted to lend them his house. Her youngest daughter was only one-year-old when they were living on the streets, because Felicia fell behind on her bills when her daughter was born. She tried to move her family into a shelter but her oldest son, Kima, 18, couldn't live with them because of the shelter's age limit. So Tony thought that the Dukes family was a perfect fit; they could all finally live together, off the streets.

"Let this be home for a year. It's yours to do what you want, decorate it, enjoy your space," Tony told the Dukes, giving them his fully furnished, three-bedroom, two-bath home.

“You don't have to be a billionaire to make a difference. We all have something to give to make a contribution to someone else's life.”

A year later, Felicia and her family have since moved out of Tony's home and are now living in an apartment of their own in Orlando. A dentist learned about this story and decided to donate his dental services to the Dukes. Others have reached out to Felicia with job and child care help. Tony feels like his life has been completely transformed. He is in the midst of planning to lend his home to another homeless family.

"You don't have to be a billionaire to make a difference. We all have something to give to make a contribution to someone else's life. What we do does matter."

Reading about Tony, I thought about a wonderful, unbelievable love story that I recently heard. It's a true story of a powerful, wealthy lawyer in New York who was divorced in her mid-40s. She was raised in what could be described as a modern Orthodox home, and she began to dig deeper into the treasure of Jewish studies and wisdom later in life. She kept asking matchmakers to set her up with a Jewish scholar.

Meanwhile, across the world, there was a poor tailor in Jerusalem who spoke Yiddish with only a few words of English mixed in. He was a Holocaust survivor who had lost his entire family in the war and had afterwards lost his wife at a young age. He worked hard in his tiny tailor shop in Jerusalem and always had a bright smile for anyone who crossed his path. Unlike many survivors, he would speak often and openly about his experiences in Auschwitz.

He was only 12 at the start of the war and he lost every member of his family. When asked how he kept his faith through so much horror, he would speak at length about the hundreds of miracles that had led to his survival. He spoke about the tiny 'coincidences' and the huge, open moments when he was almost shot but was passed over at the last minute. "I look back at Auschwitz, and all I see is God's kindness to me. And today still, I look at my life, and all I see is kindness."

Someone set up this New York attorney and this Jerusalem Holocaust survivor. On their first date, he struggled to understand her English, and she tried valiantly to use the few Yiddish expressions that she knew.

Finally, the tailor said to her in broken English, "I am a simple man. I don't have anything to give you."

And she looked at him and saw the depth of the kindness in his eyes. "I want what you are. That's all I want you to give me."

They got married thirty years ago and still look like newlyweds. They are constantly hosting and giving and speaking and teaching. They say that they look at their lives together, and all they can see is kindness.

Kindness ripples from one heart to another. It creates connection. It writes love stories. It changes the darkest places into light. It starts with a simple question: What can I do? Because each and every one of us can make a profound difference.

In the Grand Scheme of Things: Ethics of the Fathers: 2:5
Megillah Gorilla Saves the Day
Challah Reuben “Grinder”
Big OnThe Little Things
Comments
MOST POPULAR IN Spirituality
Our privacy policy
Aish.com Is Looking for Great Writers