My Sons Were at Meron 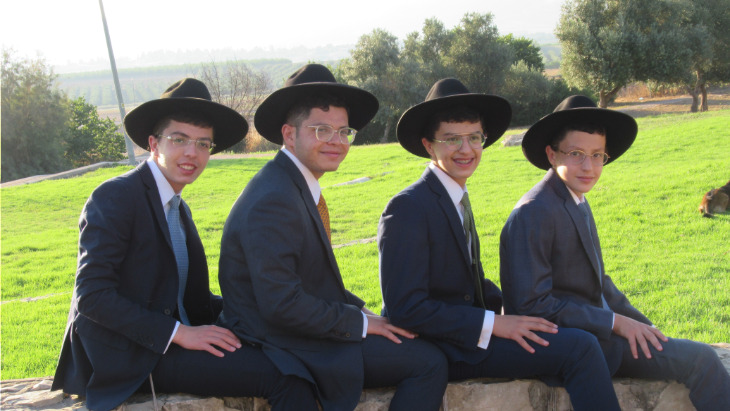 We got the call in the middle of the night. “Something’s going on in Meron. Is anybody from our family there?”

My 17-year-old son regretted making the 2 AM call.

“Something’s going on in Meron; something with mass mass-casualties,” he said. “Is anybody from our family there?”

I shot out of bed. As far as I knew, I had three sons in Meron.

It took about 20 agonizing minutes to reach my Zalman Noach, my oldest son. “Don’t worry, we didn’t get there yet,” he said. “We turned around and will be home soon.”

That was a relief. One of my three boys was safe. But where were the other two?

There was no telephone reception in Meron. (Everybody had somebody close to them in Meron, so the whole country was calling at the same time – no wonder cell phone service crashed.)

But that didn’t stop me from calling my boys. Again, and again.

I pulled out a Book of Psalms and sat in my chair. Fear doesn’t help anything, I knew that. I should really go to sleep, but how could I when I didn’t know what happened to my boys?

Two painful hours later, a neighbor called. He had been on the bus to Meron with my younger son, Aryeh Zev. They had reached the bottom of the mountain in time to watch ambulances and emergency vehicles whip by them. They were stuck, but safe.

That the call went through was a minor miracle. Then he asked me about other son. “Did you hear anything from Shlomo Chaim? He’s at Meron and we haven’t been able to get through to him.”

Oh my God! Shlomo Chaim is there!

More agonizing minutes. More Psalms. More thoughts. Many different types of thoughts: Do I have the spiritual strength to deal with a tragedy without questioning God’s will? Will I fall apart? Continue forward?

And the anguishing realization that even if my boys come home safe, many other mothers’ boys will not.

A few more minutes stretched out in perpetuity before the neighbor with the miraculous phone called to update us.

Shlomo Chaim had been located. He had been in a tent near the crush but not in the ill-fated area. He was traumatized, but safe.

Hours later, my boys were home.

Now my 17-year-old feels guilty for waking us up. Should he have called?

If he hadn’t, my husband and I would have slept through the tragedy and only found out about it in the morning as my sons walked through the door.

We would have been spared hours of emotional distress and trauma.

I told my son that I wouldn’t have wanted to miss those hours.

First of all, hours of intense prayers for my sons, for all our nation’s sons, for all the injured at Meron is not something to wish away.

But more than anything, those hours placed me in the tragedy. And when tragedy strikes my nation, I want to feel it.

It’s not easy: A shooting in Jersey City, one in a synagogue in Pittsburgh and another in Poway, California.

Each time, I have to consciously stretch my love for my fellow Jews to feel the tragedy as personal. To really feel my nation’s pain.

This time I don’t have to stretch. It was visceral.

They all could be me.

That’s the way I want to feel my nation’s pain.

May we all merit to also share each other’s joy – only joy.

Mother of All Miracles

Shop 'Til You Drop

Twisted Thinking
A Sukkot Dictionary
Yom Kippur: Tasting Transcendence
Vegetarian Stuffed Peppers
Lessons from the Book of Jonah
Where Are We? The Body, Brain, Soul Problem
Dr. Sheila Nazarian’s Escape from Iran
The Miami Boys Choir is Taking over TikTok
Caramelized Onion and Pumpkin Pirozhki
For Every Individual, A Torah Scroll
1 2 3 … 2,914 Next »